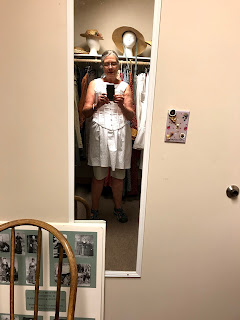 I started at the High Desert Museum last Friday.  The first thing I needed before I could put on my costume was to get fitted for a chemise and corset. 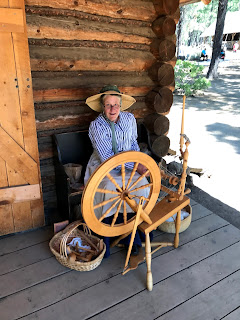 This is my costume and my station at the ranch house.  The costume isn't as uncomfortable as it looks but I am having my boots stretched before.  I learned a lot about what works and what doesn't and I realized that fiber preparation gets in the way of the interpretation of living history.  I've since prepared my fiber at home. 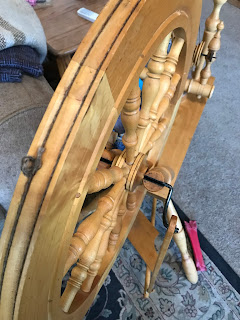 It really went well until my drive band broke.  It's been at least 10 years since I've spun on a double drive wheel so I was impressed that I was able to create a substitute band using some tightly spun Shetland wool I had in my basket.  Being wool it started to stretch and required an extra knot, a very large knot. Somehow it managed to hold together for the rest of the session. 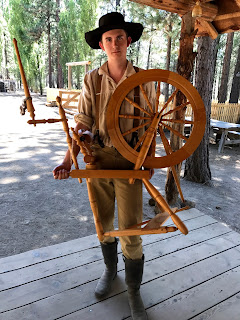 This is Shade, a college intern who plays the hired hand.  He carried my wheel to the hidden golf cart when it was time to go in.  My session goes until 4:00 but it was 95 and most of the visitors had gone inside.  Shade suggested I call it a day and I thought that was a good idea. 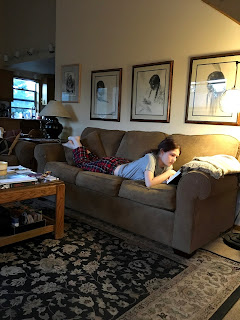 The next day we drove down to Tulelake California to meet up with my daughter and son-in-law who had driven up with Alexia.  We get to enjoy her for three weeks and I can't believe how quickly the time is going.  She loves to read so we've create an evening ritual.  After Grandpa goes to bed we stay up and read until about 10:00. That's my quitting time.  She continues until she finishes her book. 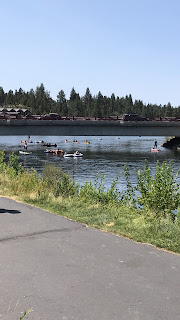 Sunday Alexia and I took a stroll along the Deschutes River, got a bite to eat and were planning to hear the free concert at the Les Schwab Amphitheater.  I asked Lu what she really wanted to do and she said - go to Dudley's.  It's a quaint bookshop in downtown Bend, a visit that I've been promising her. 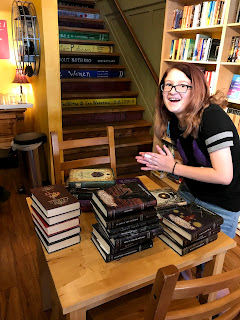 It turns out that Tom the owner had just made a private purchase of young adult novels.  He brought out stacks of books and what she ultimately chose was the four-volume Pellinor series.  He said he has more at home that he'll be bringing in next week so we'll go back.  It was starting to look pretty expensive but the hardback set was only $20. 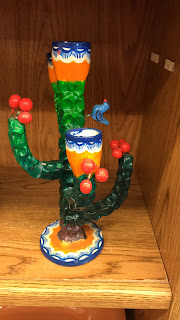 Monday we took a tour through three thrift stores and got a big laugh out of this bit of creativity.  We weren't sure of it's function because those cups surely can't hold candles. 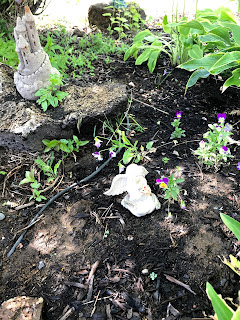 We were looking for fairies but instead found this composite angel so now our garden is an angel garden.  Next stop in this project is the nursery. 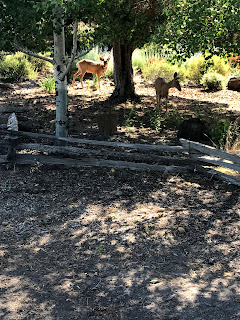 She's enjoying the deer in our neighborhood.  Her favorite was the young twins who pronged through our front yard followed by their mother who sauntered casually across the driveway.  I didn't have my camera for that but I did have it for this doe and young buck in a neighbor's yard.

Tuesday I played hookie while Alexia went to Tai Chi with Grandpa.  They went to breakfast afterwords and then to the library where she signed up for summer reading club.  She got a free book just for signing up and she's already read the required three books to get another one.  There's a list of things she needs to do to get ice cream coupons and she has three out of ten on that.  One was to meet a neighbor so this morning I introduced her to Connor who lives behind us.  Another is to plant a pollinator plant which she'll do as soon as go to the nursery. 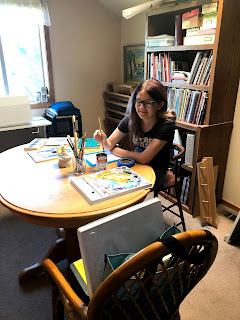 I thought she would enjoy going into the print studio and making some monotypes but after visiting it, I think she was a little intimidated.  She has elected to paint with water colors every day.

She gets to "help" me at the High Desert Museum on Friday so we will go in early for a costume fitting.  I think they'll have her help with some of the children's activities.  She's really looking forward to it. 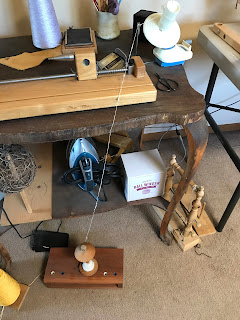 Meanwhile, in preparation I put a replacement drive band on the wheel using 8/4 linen which I waxed with bees wax.  At some point I realized that the bobbins are longer than either of my lazy kates so I came up with this work-around.  The block is something I bought from Ken Ledbetter.  It's to put in three drop spindles so you can triple ply from them.  Instead I put the pin from my Kromsky kate through the bobbin to afix it vertically.  The block has a post with eye in the front and flawlessly fed the single yarn onto my bobbin winder.

I was able to ply the wool together that I had spun last week so I have something for children to see and feel.  And I also finished processing the wool that I'll be using hereon out.  My backstory is still in process.  I need a name so I can refer to my husband as Mr. Morse (or whatever) rather than "my husband."  That was the proper form of address then.  To be continued.

Sounds like you are having a great time with Alexia; how awesome!