The last days of Grandma Camp 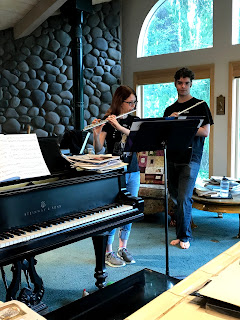 Alexia is taking some flute lessons while she's here.  I knew that my friend Helen from the Studio has a college-age son majoring in flute and when I learned he'd be home the same time as Lexi was here, I asked if Nick would be willing to make the time to teach her.  He would and indeed he enjoyed it very much, stretching it into a two-hour session. 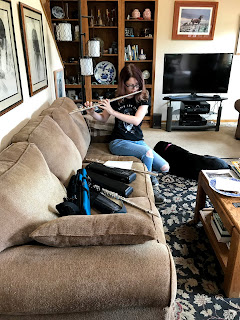 They finished the lesson playing some duets that knocked my socks off and apparently Nick's too because he sent her home with two of his flutes to practice with until her lesson on Wednesday of the next week.  He and Helen also invited us to ride along on Friday to his flute lesson in Vida Oregon (near Eugene) for his lesson with Louise DiTullio, a flutist of renown.  We were both excited. 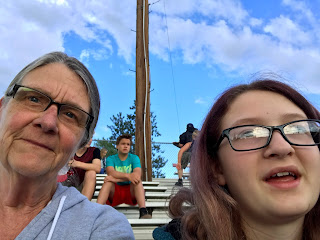 She hadn't seen either her cousins yet so we made plans to meet up with the family at the Bend Elks game.  We went for the start of the game and saved seats for the everyone as they were coming after they got off work. 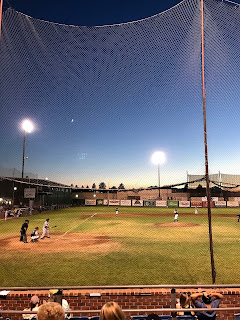 The Elks are a summer league for college students and well-supported and loved by the locals.  The games really are fun.  The Elks were losing and Lex was flagging so I told her that we could go home early.  Nothing doing!  She wanted to stay to the end and in the last inning the team pulled ahead to win by two. 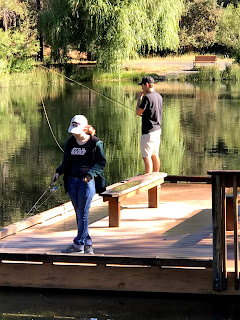 One of the things Alexia wanted to do while she was here was go finishing and since cousin Logan is an avid fisherman, he offered to teach her.  Ian and Lex met up with Logan at the pond in Shevlin-Hixon park, specifically maintained and stocked for 12-17 year olds.  Her fish wasn't big enough to be a keeper but at least she caught one.  Breakfast came next and I slept in. 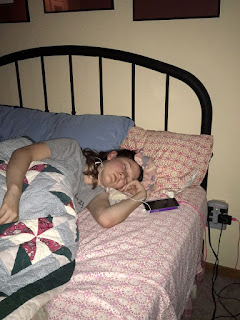 Friday morning came early but we were on time to accompany Nick for his flute lesson.  Helen drove us in her car,  two hours one way on a windy road in an unairconditioned car.  The lesson was utterly a thrill but everything caught up with Alexia, including some car sickness, and we poured her into her bed a little after 8:00 that night. 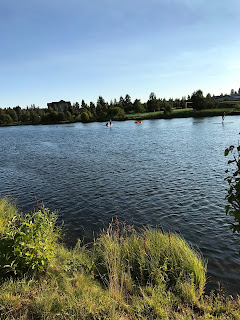 We decided a quiet day was in order for all of us yesterday so went to see Spider-Man at the theater, then out to dinner at Pastini's, a nearby Italian restaurant followed by a walk along the Deschutes River.  It was close to 7:00 by then and there were still people in and on the water. 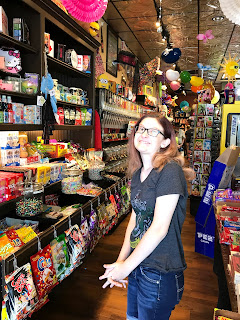 We are down to our last few days so the question was, what do you still want to do?  I forgot about Powell's Sweet Shop but she didn't.  It's every kids dream and always busy - all candy, all sugar.  She spent a modest $5.50 and I was relieved. 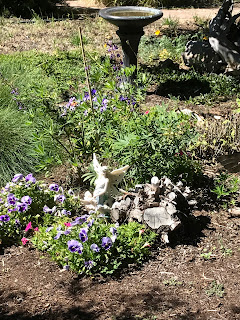 We had gone to three thrift stores and she reminded me of the other three that we had missed and bingo, she found the garden fairy that we have been looking for.

We will go to the High Desert Museum again this Friday and this time her parents will be here and able to watch their frontier daughter at work.  It's predicted to be 100 degrees that day so I told her that we'll start at 11:00 as usual but leave once it climbs into the 90s, though most people will have gone inside to the air conditioning by then anyway.

A woman who has bought woven goods from me before is coming in the morning to purchase six towels which brings my stock seriously low.  I still can't start weaving until the middle of August however as we have friends coming tomorrow and more family coming next week.  The really good thing about this time off  is that I'm really missing it and I'm looking forward to getting my looms warped again.

I'm going to Prineville on the 8th, next Tuesday, to serve as the fiber arts judge at the Crook County Fair.  Laura can't do it this year as she has to go be with her ailing father, but she gave the fair my name and assures me I'm fully qualified to perform this role.  Criteria sheets are provided so I will just act like I know what I'm doing and hope that I do.
Posted by Sharon at 4:19 PM