And another month bites the dust 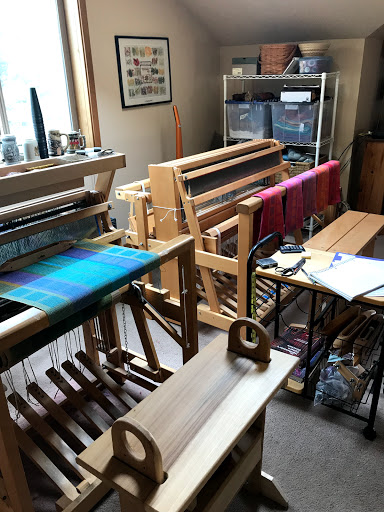 I’ve been working like a mad woman to get another set of dish towels woven in the two weeks before the guild’s holiday show this coming Saturday. 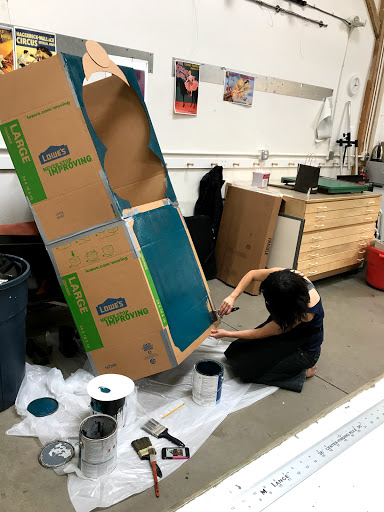 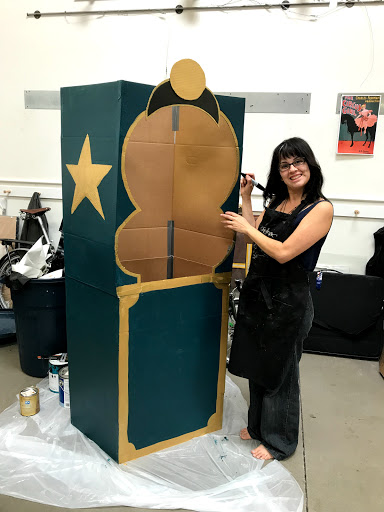 It’s the other things that get in the way.  The art center was a flurry of activities Tuesday evening during my volunteer shift, in preparation for the big fundraiser Friday night.  Ana has set-making experience and turned two cardboard boxes into a fortune tellers booth.  I who do not have set-making experience spent the evening making pinwheels. 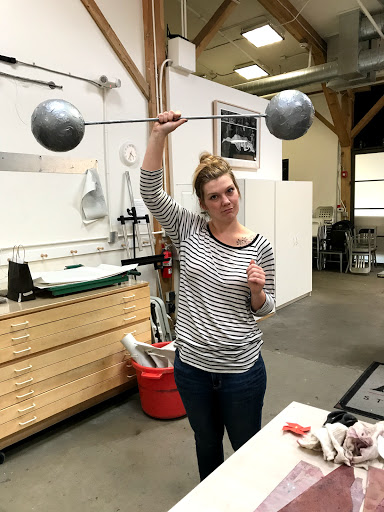 Alexis meanwhile worked on creating dumbbells for the strongman out of styrofoam balls and dowels.  The theme was Big Top Extravaganza and tied in with the current gallery exhibit of Dawn Emerson’s astonishingly beautiful circus prints.  I was picking up Melissa from the airport on Thursday and knew I’d have to miss it, but the excitement was palpable. 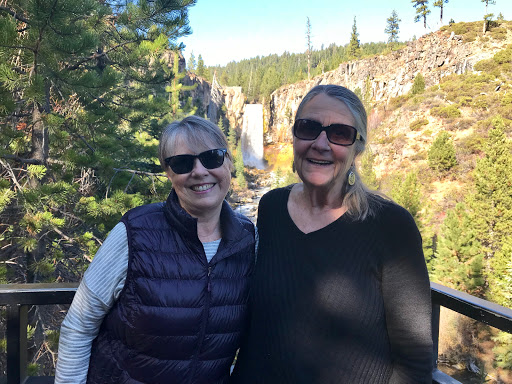 We ate lunch at Bethlynn’s Global Fusion and from there drove to Tumalo Falls, only 12 minutes from town.  I was trying to squeeze in as much as possible in her short three-day visit. 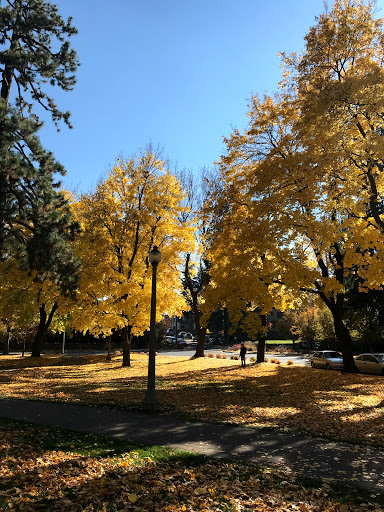 I suggested that Friday we see Despicable Me 3, McMenamin’s matinee movie.  She was game, loves the minions but we got there much too soon - the previous showing was still playing.  It was a beautiful day so we took a stroll through Drake Park on Mirror Pond which is aptly named for it’s gorgeous reflections of the huge willow trees along the banks. 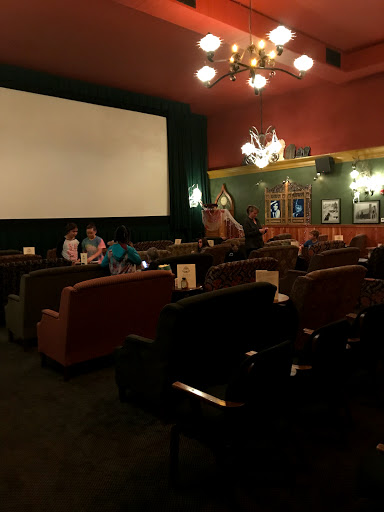 McMenamin’s is a Portland-based company that buys historic properties for their brewpubs.  In Bend they bought the old St Francis school and created this small theater out of an old classroom.  The room next to it is a music venue.  We ordered lunch and settled down to watch. 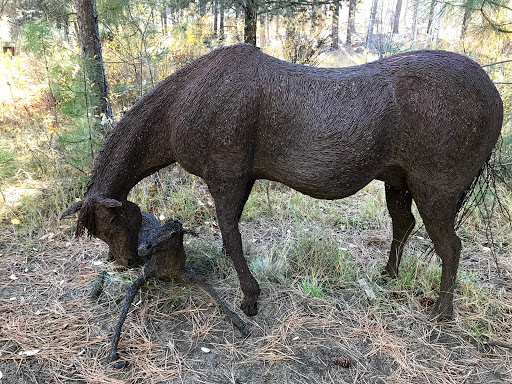 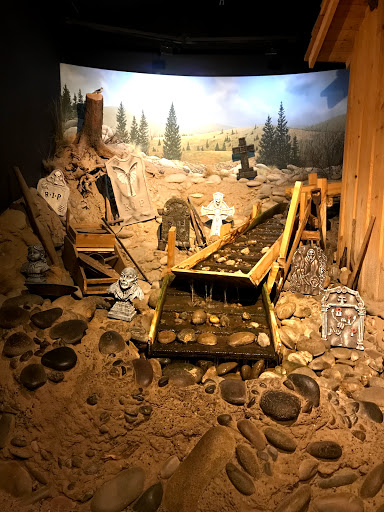 Saturday was another beautiful autumn day, perfect for the High Desert Museum.  We didn’t realize it but Saturday night was the holiday party night for Bend businesses.  We were told that Deschutes Brewery sold 500 tickets for their party at the brewery.  The HDM was a flurry of activity, getting their Spirit of the West exhibit transformed into a spooky, haunted walk through time. 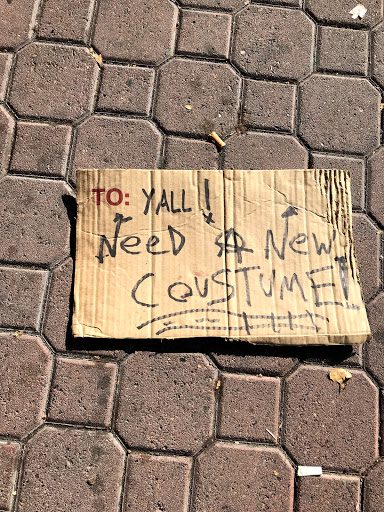 Sunday wasn’t quite as nice as Saturday.  The air was more brisk and clearly beginning to turn.  Nevertheless, there was evidence all over that a good time was had by all the night before.  I had watched the weather all week though and knew it would still be nice enough to walk around Bend and along the river, but first lunch at Wild Rose, our absolute favorite eatery in Bend. 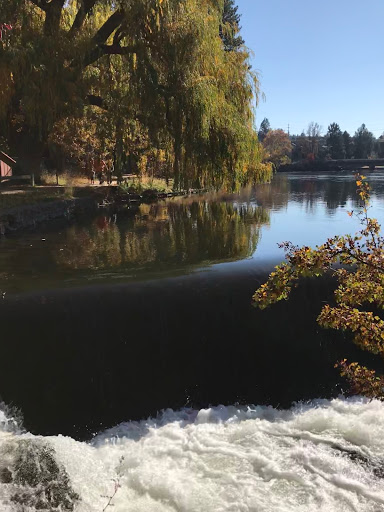 Followed by a walk along the Deschutes River.  There was a definite nip in the air so the walk was much shorter than we had planned. 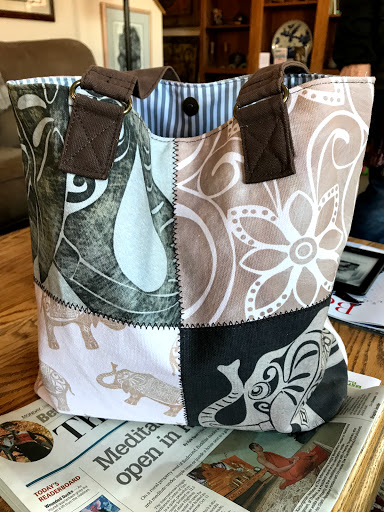 Melissa had been looking for a book bag everywhere we went but nothing we saw was sturdy enough for books.  We browsed through the cute shops and boutiques, planning to end our afternoon at Dudley’s bookstore, the cutest bookstore in the world.  It’s in an old brick two-story space downtown and advertises itself as a carefully curated collection of new and used books.  The last shop before we turned the corner for the bookstore had one lonely book bag, this one, and it was exactly what she had been looking for.  At $35, it was by far the cheapest.  It’s funny how that works.
Time for Dudley’s.  We took our time browsing and finally settled on a book each - Unbroken for Melissa and Hillbilly Elegy for me.  She ordered a glass of red wine and I ordered a beer, then we settled down on a sofa and read until we were satisfied.  Two of the things I had wanted to do, Dudley’s and Wild Rose, we managed to fit into a single day.  The World Series was on each evening and Ian, bless his heart, wanting us to have the best visit possible, took care of the evening meals except the one we ate out.
The last time Melissa and I got together was 3 1/ years ago, but we are lucky to live in the age of electronics where it’s easy to stay in touch.    It seemed like we had only seen each other the week before.  The temperature outside was 20 degrees when the cab came to pick her up for the airport at 4:30 in the morning.  Clearly we had a perfect window of time.

WOW! You two sure crammed a lot of activities into 3 days! Sounds like a great time was had by all!