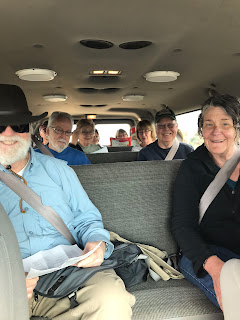 Yesterday Ian and I and four other couples took a field trip into Central Oregon to look at petroglyphs.  The trip was offered through the High Desert Museum and our guild and driver was Andries Fourie, curator of Art at HDM.  We met out in front at 7:30 and were underway shortly after 8:00. 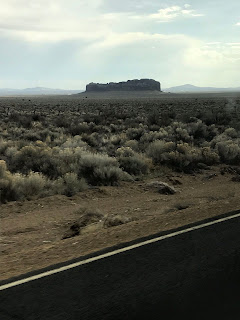 Fort Rock was our first point of interest.  Andries explained that once upon a time this area was an inland sea called Lake Chewaucan and this rock would have risen above the surface as an island.  A similar rock to the left is where sandals were found, dated between 9,000-13,000 years ago. The native peoples lived along the shore of the lake and hunted water fowl so the perimeter of the dried lake bed is a favorite of arrow hunters. 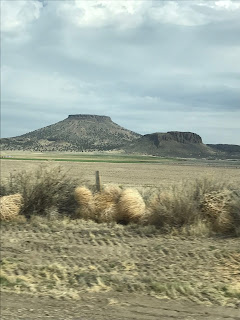 Table Rock is another remnant from the volcanic past.  It's owned by the BLM and you can drive to the top on a dirt road that spirals up around it, although Andries says spots are white knuckle - no thanks. 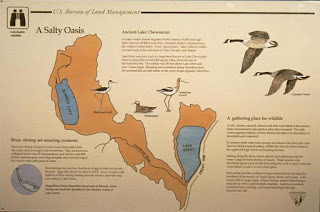 This is what the lake would have looked like before the Cascades rose up and the climate got drier.  I found an interesting blog post of a father/son trip to the region which goes into more detail which you can read here. 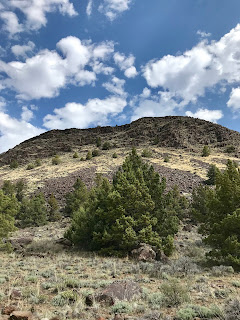 This is the crossing from Silver Lake into Summer Lake and the point of our first petroglyphs.  This is basin and range country so this is the uplifted range between the two basins. 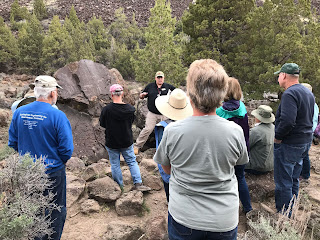 We parked the van and hiked to this spot which is just one rock of many in this area.  No wonder the road sign says Picture Rock Pass, elevation 4,380' and there's no way I would have found this without being led to it. 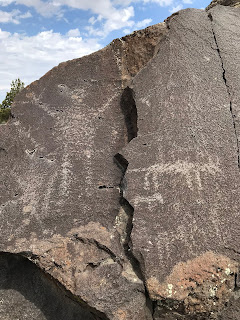 I worked on the research for petroglyphs of Nevada that were used as part of the interior design of the Spanish Springs Library opened in 2005 and that I retired from in 2009.  I was very surprised at how similar these were to those.  Andries said that actually these primitive drawings are similar all over the world, including South Africa where he is from, and also France. 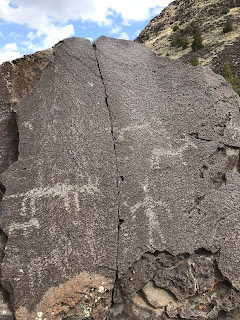 The figure center right looks like a horse and rider but the dating of all of these figures has been established at around 7.000 years ago.  Horses weren't present in the Americas until after the Spaniards introduced them and the rider was added and dated as later.  Andries showed up how rocks were tapped onto the surface to creating these "etchings." 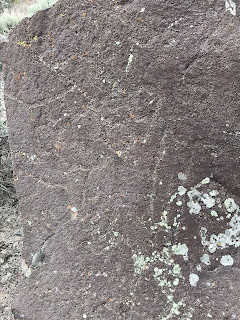 This is known as the Ana Boulder and is on the shore of Summer Lake, or what once upon a time was Summer Lake.  It like many of these remnants of Lake Chewaucan are dried up alkaline lakes now.  This originally was a large rock, however, in 1980 in straightening a road the county blasted several boulders which had been deep grooved petroglyphs.  Six fragments of these boulders remain.  This was the oldest of our trip.

Our trip was a special arrangement made with Andries by one of our group who is a generous supporter of the museum.  The original trip offered and filled within the same day so Andries agreed to do this as a shake-down cruise.  We were running late by the time we arrived for lunch in Paisley, home of the Mosquito Festival.  The first order of fine-tuning for the next group is to make lunch brown bag.  The rest to follow.....

Labels: Field Trip, Oregon, Out Back