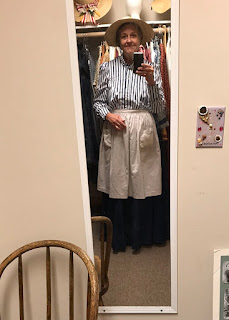 It's that time of year again and I'm back at the High Desert Museum for the summer months on Fridays, well most Fridays.  We do have a couple of trips planned. 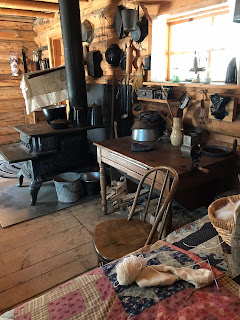 This is the "settlers cabin" which is based on information from Western homesteads.  I decided against a spinning wheel this year and have a basket of knitting, some wool and a drop spindle.  I used the spindle a lot this week as we were swarmed with 2nd graders.  There was a communication breakdown and we were unaware they were coming, but after a couple of visitors commented on all the school buses out front, I knew it was going to be an interesting day.  I like the mobility of a drop spindle. 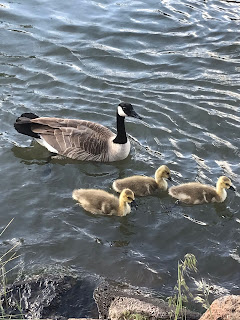 My walking partner Cinda and I are enjoying morning walks along the irrigation canal near here, and we're especially getting a kick out of the waterfowl.  These geese have doubled in size since last week.  Mama bobs her head up and down, warning us to stay away. 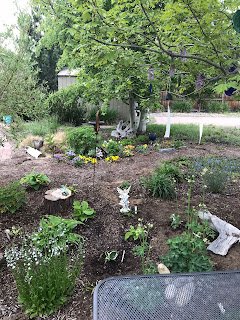 I got an email from a couple you have a home nursery about a mile from here.  I followed signs to their sale last year and bought six plants that proved to be vigorous growers.  I signed up for their email notice, and good thing - they didn't put out signs this year.  Cinda wanted to go with me so we took her car which is bigger - good thing! - and got there a few minutes before the opening at 10:00 and found their place was already a beehive of activity.  They charge $6 per plant whereas nurseries run about $12 each so it's hard to resist the temptation.  I planned to buy six but barely reined myself in at 14 and I planted every last one of them yesterday.  Once the plants grow and fill out, this bed will be finished.  I'll only need to weed. 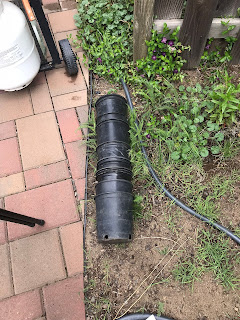 There are 14 pots there if you can count them!! 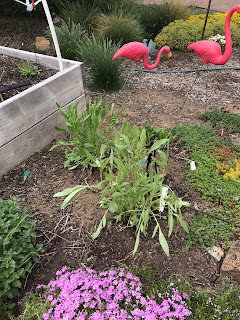 These two coreopsis were the two plants I had worried about.  They were nearly laying down when I finished planting them, but we had a nice quiet soaking rain during the night and they have perked right up. 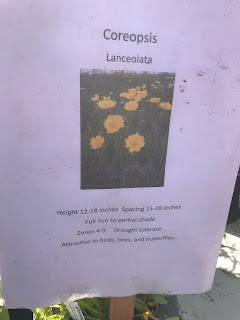 The couple have a well organized event and good thing.  There had to be upwards of 70 people when we were there and we were early!  Each plant has an informational sign which I take a picture of. 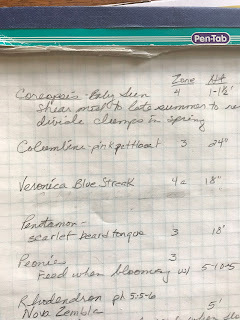 When I get home I put all the information in my plant care map.  I shot this with my phone yesterday before leaving so I'd know what I already bought but you can see how I have organized it.  I got tired of looking up each plant and now know the zone, height, spread, sun, and season for everything I've planted in our yard. 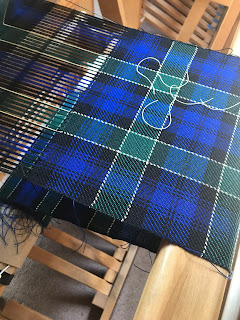 A new sales event was announced at the Guild meeting on Wednesday.  We've been invited by the raku potters to share their venue in August and of course I'd like to participate.  I have been slow to clear this project from my loom as I was anticipating taking June and July off from weaving like I did last year.  It's difficult to stay indoors during our beautiful summer months but I need to weave at least 30 towels, but first I needed to finish this.  Oh how I am loving tartan.  The fringe is cut at 2" and thus the obnoxious twisting is eliminated.  And all the ends will be snipped off after this takes a trip through the washer and dryer.  There are two scarves, one is for Ian and one is sold.

LOVE the tartan scarf! Ian will love wearing it! Volunteer time can be interesting...I'm glad you're enjoying your time there.