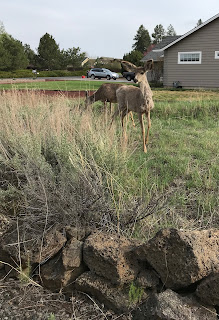 The seasons are slowly changing.  We still have more cloudy days then sunny but the tender grass shoots are attracting the deer who aren't atall that afraid of us.  I took this picture in our driveway from my car window. 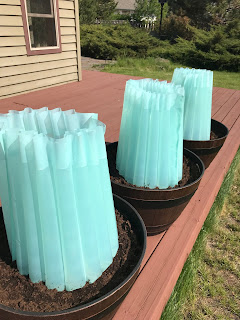 We're trying something a little different for tomatoes this year.  We're hoping that growing them in tubs and starting them early with Walls of Water will give us seasonable produce.  These are Early Girls which have just about the shortest growing season of all the varieties. 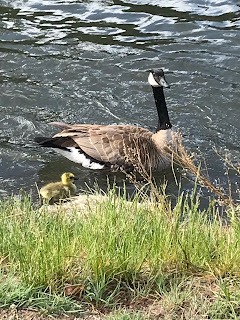 My walking partner Cinda and I have been seeing waterfowl since the irrigation canals were filled April 9th and now we're seeing the babies.  So far the protective parents haven't menaced us but I'm sure that's coming.  They can be mean! 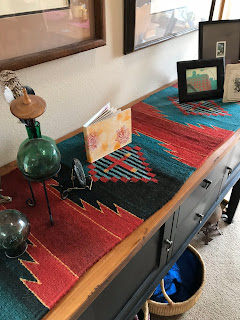 And speaking of Cinda, we came across the signs for an estate sale last week so after our walk we drove to the sale in case we bought something - which we did.  I got this handwoven wool runner from Mexico for $20 and a couple other things including a lamp.  Cinda is the one we needed the car for!  I've never gone to an estate sale before because it seems kinda sad to pick through someone's things, but I came away understanding that the money raised from the sale benefits the family and in this care, the widower himself who was cutting ties here and moving to SoCal.  He left behind a closet full of flannel shirts that he will no doubt not need down there. 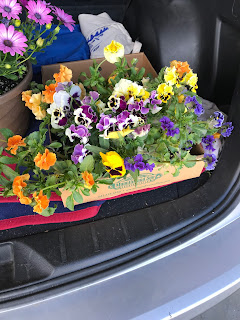 And it's time for yard work.  I'm holding off on adding more perennials until the danger of killer frosts has passed.  I bought a flat of marigolds last week from Costco and planted them the same day since the sprinkling system was coming on that evening.  I was reassured by NOAA that it wasn't too cold to plant, only it was.  So no annuals and no perennials but pansies always work, plus I love their happy faces.  I removed the dead marigolds and replaced them with these. 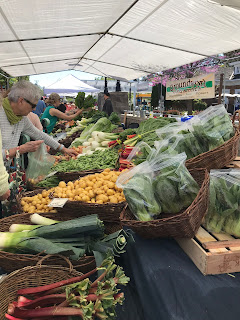 The farmers market downtown has opened fully one month early.  This produce is from a farm in Junction City which is a little NW of Eugene.  It's nice to buy lettuce and not be afraid. 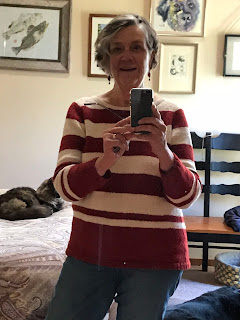 I finally worked up the nerve to wear my Where's Waldo sweater for the first time yesterday.  It was a busy afternoon: book club at noon, followed by the final session of Smart (Start Making a Reader Today), the Oregonwide program to engender the love of reading in kindergartners.  I've read weeky to the same two kinders since October and was sad to say goodbye to them.

My knitting was on the backseat of the car so I went to Fancywork, the new LYS to knit with friends afterwards.  My sweater passed muster.  I have two more in process right now, hope to have at least one finished soon, while I can still wear it!
Posted by Sharon at 2:24 PM

LOVE your Waldo sweater! It's just hard to believe you can still wear it in the middle of May! Good luck on your garden!

I hope your tomatoes do well. Everything is so late here that I've not even seen tomatoes in the garden centres yet - and next weekend is our traditional planting time! Love the Waldo sweater! It's fun.