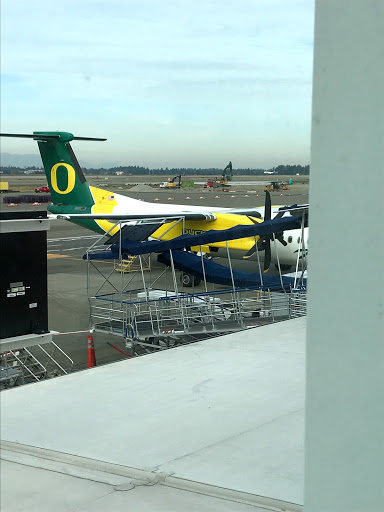 We had a shuttle pick us up and we got to the airport about 7:30 Thursday morning.  Our house sitter arrived about an hour after we left and was so attentive to Sammie that for once she wasn’t a wreck by the time we got home. I thought it was cool that we got the U of O plane.  Go Ducks!  Our connecting flight was in Seattle which added a couple of hours to our time in the air. 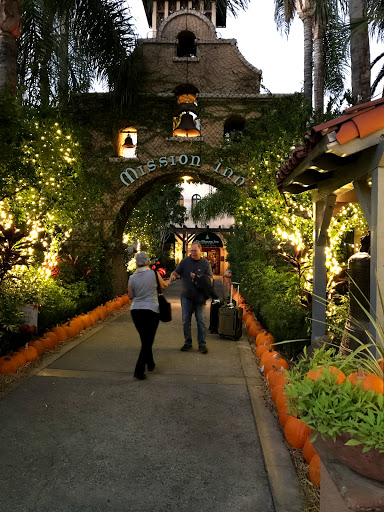 Alaska only has a couple of flights from Redmond to Ontario so we ended up on the same flight as Rochelle in Seattle and rode to the hotel in her rental car.  It worked out so well you would think we had planned it.  We arrive at the Mission Inn about 6:30 after a long day in transit, and no, driving would not have been better. 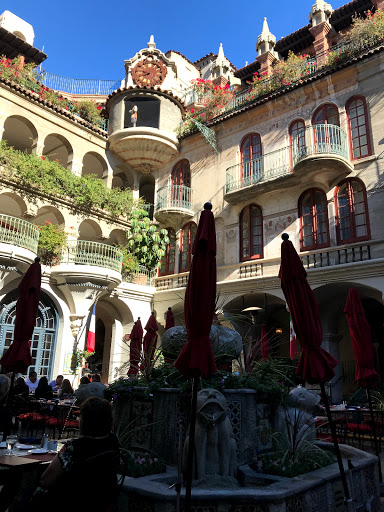 The hotel takes up a whole city block and is magnificent.  It’s been through different stages of construction since 1903.  Ian says it’s sorta like the Winchester House of Mystery.  We ate a couple of meals in the courtyard.  The food was great as was the ambiance. 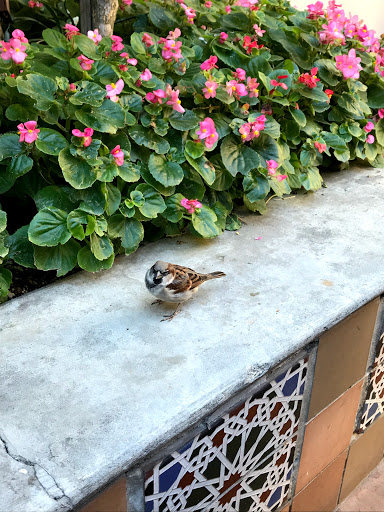 We had the attentive eye of a half dozen house sparrows at breakfast. 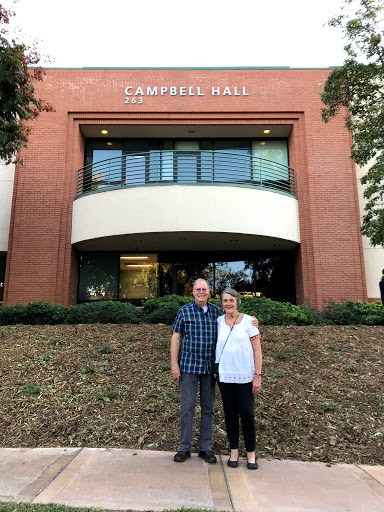 Friday we all drove to the the University of California at Riverside for a naming ceremony, the reason for the trip. The last time we were at UCR was for the naming ceremony of the Neil A Campbell undergraduate biology lab. This time the naming ceremony was for Campbell Hall, short for Allison and Rochelle Campbell Hall, acknowledging the generosity of their trust from Neil’s textbook and also their role as regents. It was great to be part of this and also to see family and old friends.  Our granddaughter Elise took this picture for us. 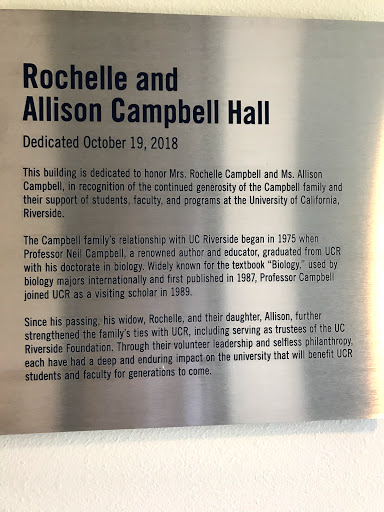 If you can read this plaque, it explains it better than I ever could. 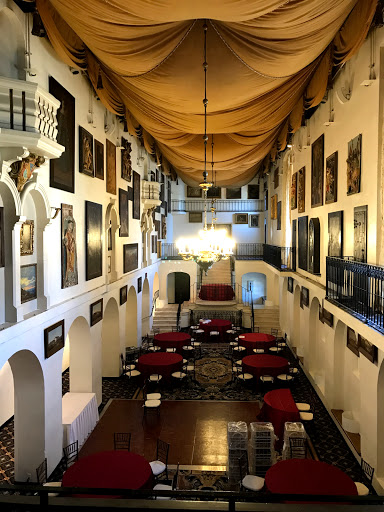 Allison kept telling us we should take the guided tour and when we didn’t react, she marched us over to the museum store where Dougie signed the three of us up. We had a few minutes so I went back to the room to brush my teeth and grab Ian. The tour lasted 75 minutes and was far better than I could have imagined. This room is called the Spanish Gallery. 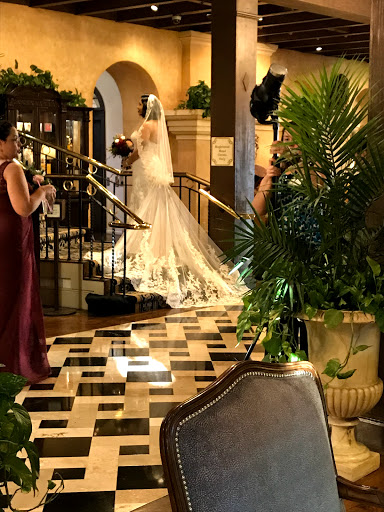 Rochelle, Allison and Jason has to attend a formal function Saturday night at the Chancellor’s house so we took a seat in a lounge area and rubbernecked. I saw three wedding dresses, there may have been more weddings than that, but I can only attest to three, and this dress was by far the prettiest. 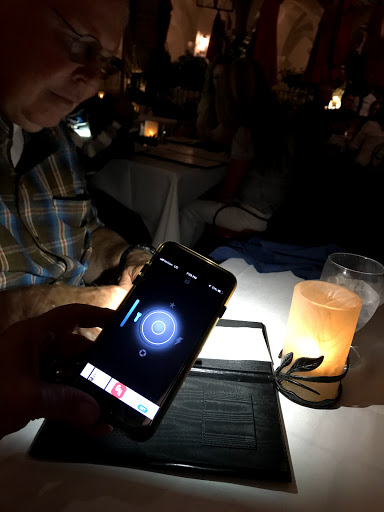 We ate dinner in the courtyard again since the trust was footing the bill. Once the sun set it got pretty dark. 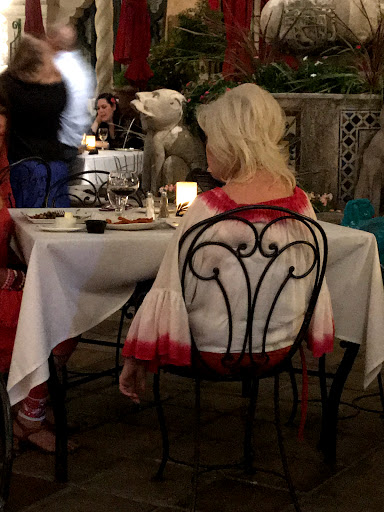 These ladies were at their table when we were seated and there when we left. I so badly wanted to see what the rest of this dress looked like. Did the dress redeem the sleeves?  I will never know. 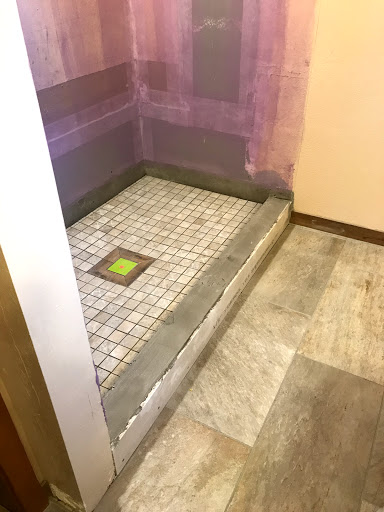 The flight home took all day Sunday and while we were gone Matt came to finish the shower base. He had made a custom shower pan, then with his ceramic saw cut up floor tiles into 2” squares and set them in the pan. It still has to be grouted but you can see how pretty it’s going to be. The cutting must have taken hours! 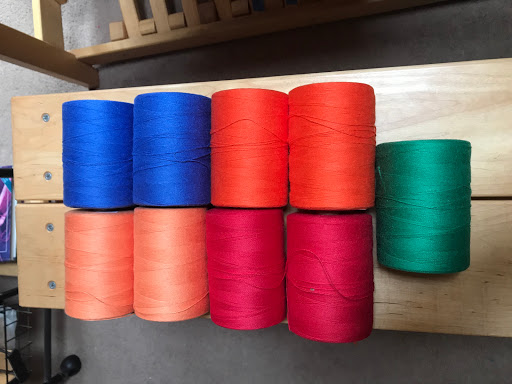 I participated in a group buy of Brassard’s cotton and picked up my order today. Linda organizes and manages the whole shebang, and we end up paying about $15 a pound. It’s too good of a deal to pass up. I’m phasing out the UKI yarn, and sadly I have a lot of it. I’m thinking about putting it on a table at a guild meeting with a “free” sign on it. UKI colors are great but the hand is rough. It affects the caliber of my work. 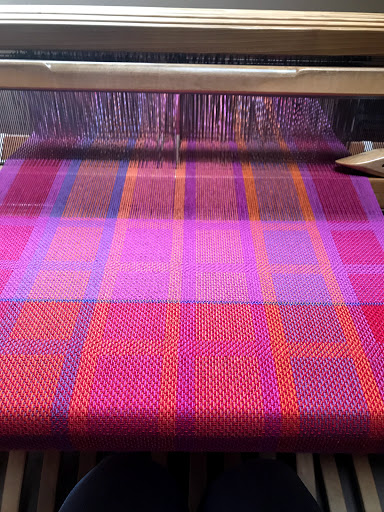 I have some UKI in the warp, but it’s the last time. I hope that by avoiding it in the weft my towels will still be soft. 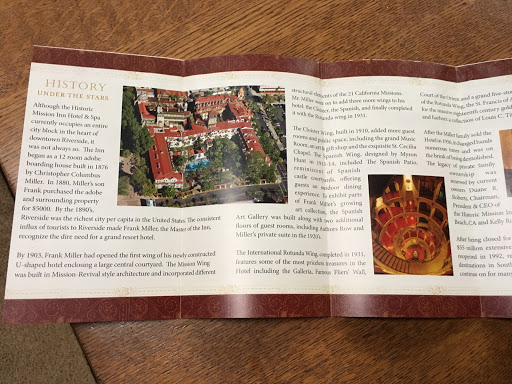 Here is a picture of the hotel and the rotunda from the self-guided tour brochure.
The first game of the World Series is about to begin!!!

Surely you could sell the cotton you don't like since everyone has different tastes! Maybe on Ravelry? That is a beautiful Inn; sounds like a lovely trip. So glad Sammy wasn't stressed this time.