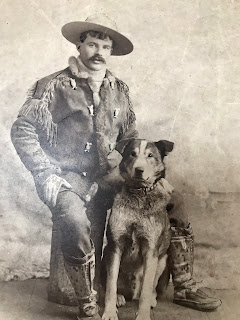 My daughter Chris is the genealogist in our family.  Years ago she contacted a guy through Ancestry whom she learned was researching my grandfather Capt Dick Craine, pictures in this formal portrait with his sled dog Hunker.  He had a display called Eskimo Village in the St Louis 1904 Columbian Exposition and afterwards took his act on the Chautauqua train during summer months.  None of this is written down.  It's only in my head as memories of conversations between my mother and grandmother and stories that my brother told me.  Grandpa passed away before I turned three.  Chrissie put me in touch with Richard who has retired and turned has his attention once again to his research. I've spent hours this past week trying to answer questions and scan photos for his use.  Families should write down their stories!!!!! 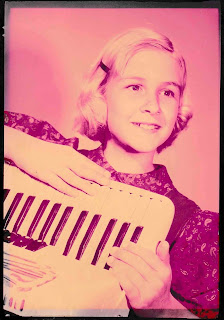 I found this while sorting photos.  It's only the second photo I have of me and my accordian.  It was huge. 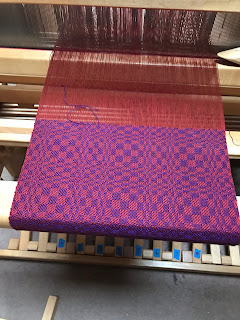 Fiber Market Day is this Saturday.  The towels are finished and they only need to be tagged and inventoried.  This scarf is the last thing I need to finish.  It started as a profile draft that I doodled on graph paper.  I chose turned twill as my weave structure and I love it.  Look at all the movement!! 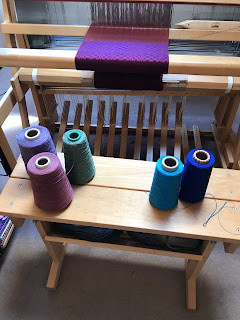 I like it so much that I'm already picking out the next yarns so I can do it all over again.  I think the winners are cobalt and turquoise. Ian and I are going to drive up to the fairgrounds in Redmond on Friday evening and set my booth up so all I have to do Saturday is show up.  I need to remember to test my Paypal Triangle credit card scanner and get some cash from the bank. 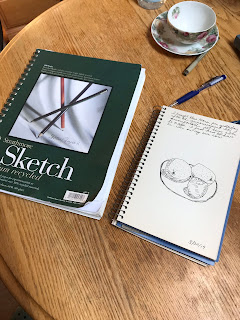 I went to the member meeting yesterday morning at the Bend Art Center where I have volunteered every Tuesday for the past two and a half years and where I have received invaluable instruction.  We've been aware that the center is in financial straits and I think we all knew something was coming.  After 12 years Bend Art Center which includes Atellier 6000, the working studio, is closing its doors.  I believe our last day is April 6th.  There were a lot of tears and mostly shock.  There is absolutely nothing else like it in Bend and it's the second art education in the past five years forced out of existence.  Chrissie said, you would think that an art-centered community like Bend would have an artists colony.  You would think.

This has left me wondering where I am in all of this.  I had bought a heavy glass baren several months ago so I could do hand-pulled prints at home, assuming that I'd always have the intaglio presses when I needed them.  Everything must be sold.  The largest press is worth between $10,000-15,000.  I suggested they see if the community college would be interested in acquiring them so at least there could be a printmaking program still in Bend.  For now I'm going to continue daily sketches in my sketch journal.  Yesterday I bought a fine tip pen after the announcement and decided to try weaning myself off erasable pencil.  I'm numb.

Oh Sharon, I am sad for you, everyone else involved in the program, and Bend! But I know you will continue to learn and grow, somehow.

What a shame about the art center - very sad when places like this can't make it. I hope the press goes to the college.

The photo of you really shows how much your granddaughter looks like you. Do you still have your accordion?

It seems the way of things, that art isn't considered important enough to support. Most communities want it though, just not enough to help the venues survive. It's very sad and really takes away from society.

Do you still play the accordian? It's a fun instrument for sure.