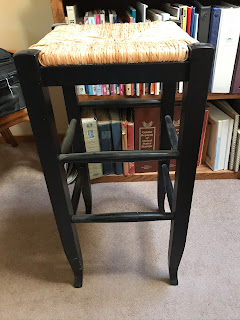 I bought three of these Pottery Barn stools at a local upcycle store that sells exclusive names.  I thought I got them for a steal but forgot to measure the height.  No steal.  They're too tall to fit under the counter.  One has been hidden behind the easy chair in the great room with the digital antenna on it.  The other two have been put into service in random places. 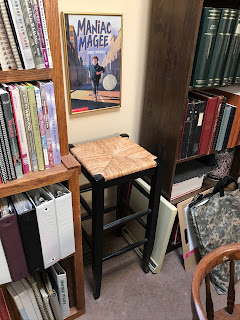 My workroom isn't very big and three of the four walls are in use.  The other wall is two accordion closet doors.  I've taken to piling stuff on the stools. 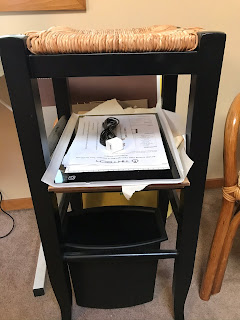 One day recently I realized that the rungs could hold shelves and tested it with a picture that fit just right.  I appealed to my construction-knowledge son, asking him to cut four pieces of wood to fit. 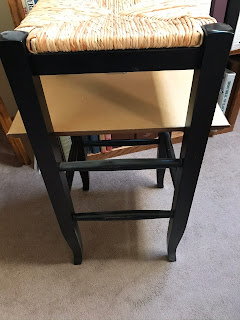 The next day he dropped Delaney off and left rather abruptly.  I didn't realize how seriously he took me.  He had some alder plywood and came back about 30 minutes later with the four shelves, uniformly cut and sanded, made with equipment in the back of his truck.  This simple fix augments my storage space significantly.  Thank you construction-knowledge son!! 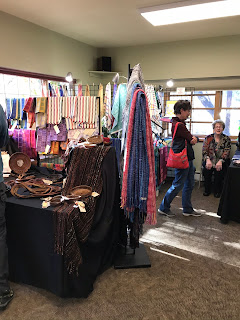 This past weekend was the third Holiday Show and Sale for Central Oregon Spinners and Weavers. The first year was a straight-up craft fair with individual booths.  Last year the board met and decided to run it as a boutique, all sales done through a central checkout system. 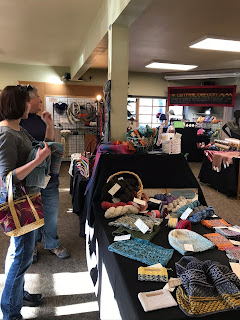 We expanded from one day to include the evening before and capitalize on the First Friday Art Walk.  Attendance was far better than anyone could have hoped for. 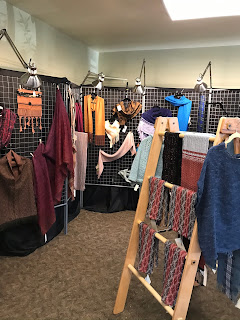 I took these three photos about 3:15 when the show was winding down and just a few people were trickling in.  We were well into break-down at 4:10 when I heard everyone asking if anyone knew of a yellow scarf.  A lady had thought about it and come back to buy it, but no one could remember seeing a yellow scarf.  It turned out to be a gold and bronze huck lace scarf of mine.  It's in this picture, in the back corner.  It was the only scarf I sold and it was ten minutes after closing.  As Yogi Berra said, it ain't over until it's over. 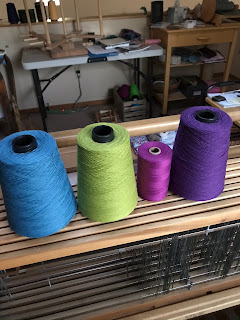 Both of my looms are nekid.  I've been eyeing this color combo for more than a month.  It's going to my next project. 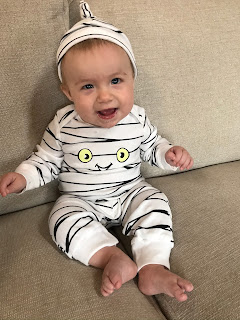 And finally, a Big Happy Halloween from the Littlest Mummy :-)
Posted by Sharon at 5:26 PM

I've learned to never break down early at events. Nine times out of ten I get a sale at the last minute, or even after the advertised closing time. I've paid for the booth for the day, why leave early?