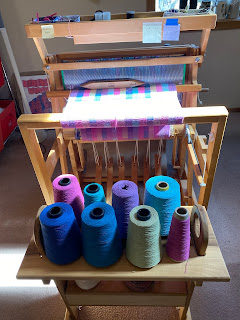 These cones are the eight colors I've chosen for my single shuttle Crackle towels.  They're here because I have stuff strewn all over the place as I frantically work on my Echo and Jim projects for the Linda Hartshorn workshop.  I don't think the workshop is any less intensive than her traditional 2 1/2 day taught in person.  The only thing missing is being able to handle the fabric but I've said that before. 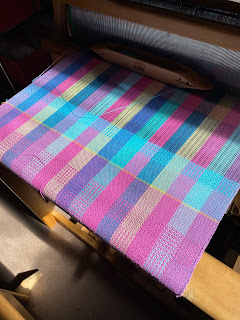 I'm about at the end of my warp and have already selected eight colors in reds and oranges for another warp.  If I keep this up I might have enough inventory for a sale in the future, if that ever happens. 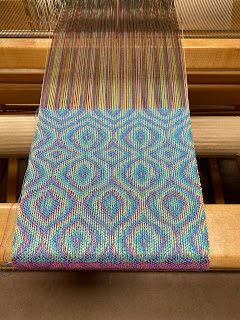 This is a sample from the Echo weave part that we did on the first day.  If you see purple, your eye is fooling you.  The warp and weft are both 8/2 Tencel which is a form of rayon.  The tie-up is a traditional 8-shaft twill. 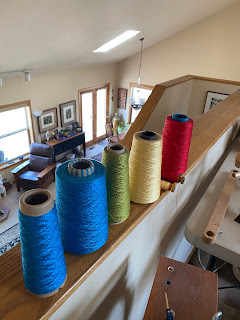 These are the colors I chose.  The warp is wound at 40 ends per inch - wowzers!  That puts four threads in each dent, and while I thought it was over my head, I only made one warping error and was able to fix it with a string heddle.  I'm so impressed that I even know how to do that.  I can't tell you how much I've learned since moving here and being part of an active weaving guild. 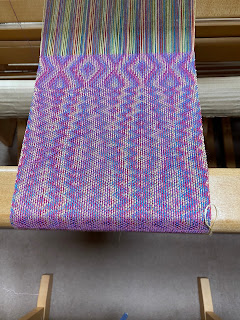 This is a sample woven in Jin.  The only difference is changing one harness on each treadle and the use of a second yarn known as a tabby, which is one shot of a different thread woven as plain weave.  That thread's function is to tie down the weft and keep it in place.  It's slower to weave but it's certainly interesting.   The tabby is where I made the most mistakes, which just tells me that I need to do it more to teach my muscle memory. 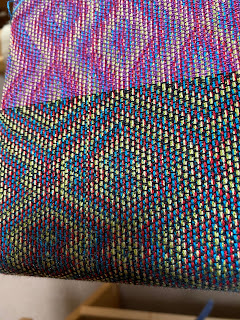 Linda recommended that we use a finer thread for the weft and I only had three colors in a size 16/2 bamboo, nothing else finer.  I bought it a long time ago because I was going to weave Huck lace scarves until I wove a couple and realized how time intensive they were.  We were instructed to add enough warp to weave a scarf after we had finished all our samples.  The black is the finer thread and from this sample I decided to use it for my weft. 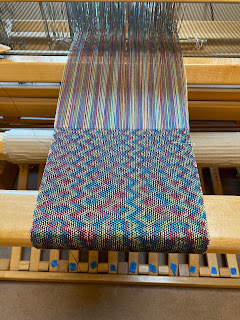 I chose three patterns and alternated them. 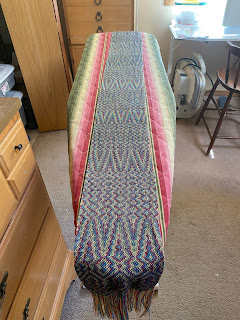 This is the finished scarf.  I'm pleased with everything except the length.  I ran out of warp because I had woven too many samples.  It's not even 60" but it's still wearable.  Tomorrow morning we wrap up the workshop and review our projects.  Ian and I are packing our suitcases and will leave as soon as that it done for a short stay at Yachats on the coast.  We'll resume our babysitting responsibilities next week.