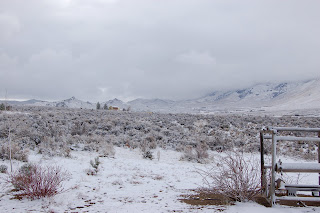 This last storm was bizarre. Snow fell in a capricious patchwork throughout our area. We watched the storm track on the NOAA website and kept saying that it appeared there was a hole in the storm right over our valley. So this is the south end of our valley, as shot from our deck. 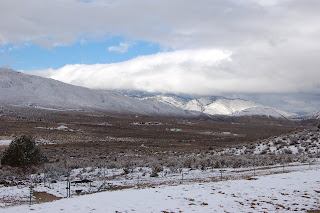 And this is the north end of the valley, as shot from our deck at the same time. The roads were snow/icy going south and clear to the north - so very weird. 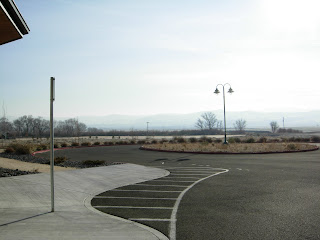 There is almost no snow at work. Since most of our staff live within a few miles of our facility, this is their experience of our storm. You can see the inversion in the valley in the background. It's one of the reasons I don't mind my monster commute. It's my choice to live out and drive in, snow or no. 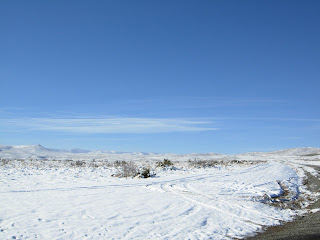 I arrive at work with aching eyes. The temps in the morning are below 20 and the daytime temps aren't above freezing, so nothing is melting. The drive to work is blinding at times, so I took this to show my co-workers what I'm talking about - somebody got snow and ice. It's the ice I respect, oh yeah. Do I want to move back to San Diego where I grew up. Nope - big time. 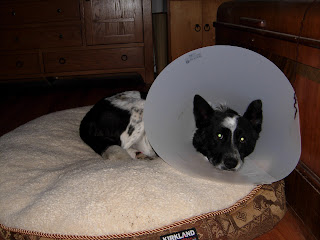 So how's Lucky, I mean Eddie? Lucky Eddie has ears up and gets stitches out tomorrow. The drains go on Tuesday, which means four hours of driving on top of my eight hours of work, nine including lunch. But, who's counting. I'm so happy to see those up ears. Will he continue to chase cars? Oh, probably he'd like to. He also still wants to kill coyotes and he's tangled with them too. Our vet reminds us that it's our responsibility to make sure our dogs are safe. Making them safe out here isn't as easy as it was in town, but the options are pretty narrow. We can't have inside dogs, but we are trying to make them as safe as if they were.
Posted by Sharon at 4:42 PM