Merry Christmas to Me 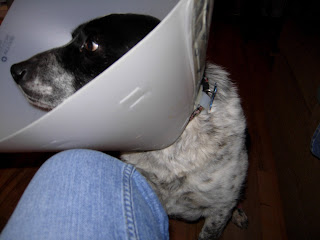 Eddie doesn't under-
stand what has happened to him and he's looking unhappy, because he is. Ian took him in to have his dressings removed this morning, and Dr. Dose told him that Eddie was very lucky. Had I not been home, he would have bled to death. That would have made for a very sad Christmas. 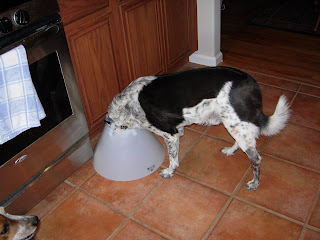 It looks like he's gotten his head caught in something, but it's just Eddie eating his dinner. There's nothing wrong with his appetite. Ian says he looks like a lampshade. You can see that his back leg is shaved and if you care to click for big, you can see his drain - yuck. 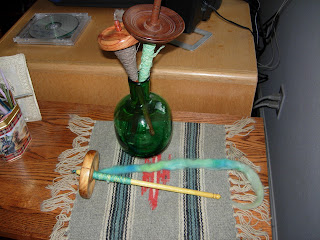 The spindle I ordered from Greensleeves came today. It's canarywood with a yellowheart shaft. It's rather plain in contrast to the Hatchtown spindle behind it that Amy loaned me, but it just spins and spins and spins. So now I own both the Greensleeves Fox and Hound spindles. Good news - Amy got an email from the Ledbetters. They are going to exchange my broken spindle for a whole one. They'll just be getting back to Tucson the day before Amy leaves it, so that worked out well for me. I'm glad because I like the Ledbetter better.

I'm going back through my old SpinOffs because I realized there are articles on spindling that I just skipped over. The one that's probably going to get me in trouble is in the Spring 2007 issue and features the spindles of Tom Forrester. I think I want one. And then there are the Goldings...
Posted by Sharon at 4:41 PM

And this is the woman who couldn't imagine why I needed more than one spindle! ;-)

Spindles are wonderful to collect. I love all my Greensleeves and my Golding is, perhaps the best spindle I own. I'm looking for a Forrester, too.

Poor Eddie! But I have to laugh at the photo of him eating.
I don't spindle spin. Why? I can't...no matter how hard I try. Poor me. Poor Eddie.

Ha ha, Eddie does look like a lamp shade, poor thing. I'm glad his appetite is good though, that's a good sign.

Regarding spindles, sounds like you've got the collector's bug!

Oh, Poor (dingbat) Eddie - glad you were there to get him to the vet's. Your guild's Christmas meeting looks like it was a lot of fun! what a beautiful building to have use of.

Take care in all that ice and snow- the same thing happens to us - we'll have snow and ice covered roads and 6 miles away in town, there will be nothing. Weather is mysterious at times, isn't it? T.

I am behind on reading your blog, but sure am glad to hear that the saga of Lucy Eddy is coming to a happy resolution and that his appetite is back! Also glad to see you developing a fondness for spindles... I am in awe of the Goldings for their appearance but have a pretty good-sized handful myself already, hee, hee.