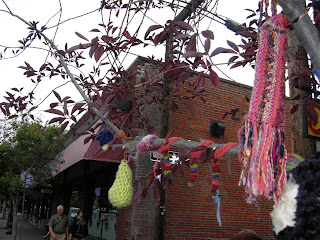 I have only seen public art in online photos and magazines. I have never come across amy myself. It's one of those things that I kinda get but not quite. There was so much going on during the Bend Summer Festival that I walked right by this. 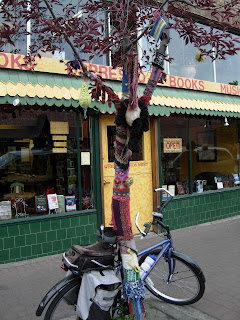 I would have completely missed this in the hoopla but Missy saw it ans called me back. It's pretty amazing. Do they knit the strips and then stitch them to the tree? It's awesome. Once we stopped, others did too. 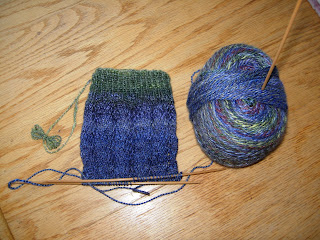 This is also knitting in public, if you call a waiting room public. Ian had heat exhaustion four years ago and ended up in urgent care. He tangled with it again four weeks ago while cutting firewood in the Sierras. He wasn't better, so I took him in to the doc two weeks ago and now again yesterday. Lots of tests, lots of knitting. Mixed diagnosis, but hypertension was once of them and already he's responded to that medication. Huge sigh. The knitting is fine. Meanwhile on the ranch, 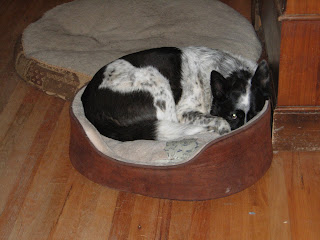 The temps were starting to push 100 and were miserable, then the clouds started to roll in. This was a big surprise since thunderstorms weren't in the forecast. I consulted my in-house weather forecaster. Nope, he said. No electrical activity.
Posted by Sharon at 9:21 PM

My sister has the border collie model of thunderstorm forecaster. If Scooter's behind the toilet, a storm is coming! I hope Ian is feeling better soon! It's way too hot out here, too!

I'm happy to hear that Ian is feeling better and he got good care!!!!
Very hot here and need rain. We can't even enjoy sitting out in the yard.

Hope Ian feels better! It's been a crazy summer weather wise...but before we know it, fall will be here! The knitting in public is great!!!

Heat exhaustion is nothing to tamper with. Scott can't be out in the heat more than a few minutes when he turns ghost white and topples over. It takes him several days before he feel better. Tell Ian to take it easy, and please keep an eye on him.

On and off again weather this summer. I wonder if the sudden high/low pressure systems play havoc with out systems? I like the Yarn Bombers - as they are called here - because they are bringing knitting and fibre into the public's focus.

My Fiberdog predicts about 1 hour ahead of the storm, by going upstairs (which she never does) and sitting on the stair landing. Maybe she is high above the vibrations?

I don't think they know what they're talking about personally.
Feel better Ian!

I do hope Ian is feeling better now. The knitting in public is great. Have a nice weekend.

On perhaps my first real outing here in Ohio last fall, I happened upon knitting covering a sidewalk bench. I was so surprised. Very cool.