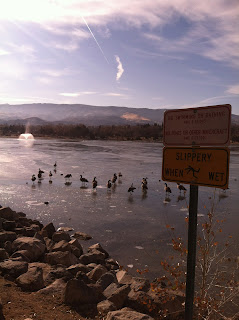 Melissa was back from SoCal for a couple of days to tend to her business here. She's in the unenviable position of being my age with businesses in two states and little opportunity for retirement. We had planned a play day but realized we were both too tired to play, so we just ate at her place, played with her kittens and took a walk about Virginia Lake, which is just across the street. We had to laugh at the Canada geese *on* the lake. I forget that I have the capacity for video on my phone and am kicking myself for not catching the hilarious landings of the geese on the ice - lots of crazy sliding by them and lots of crazy laughing by us. 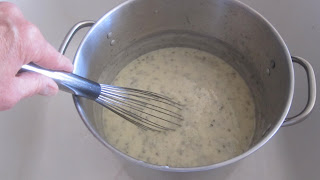 I decided Friday was Christmas cards day, however I had just gotten back my soap basket from Carol and Kerry who had added it to their craft fair booth and realized that I was out of lavender soap. It's quickly become my most popular bar. Since soap needs to cure for three weeks, it was the priority. I made orange cinnamon soap the prior Friday so our house smells fantastic.

We dragged our feet on Christmas cards this year. We couldn't decide if we should order from Unicef, Habitat, the Art Institute of Chicago - deer in the headlights. I mentioned to Ian that Sandy paints a card for each Christmas - she had them for sale at the craft fair we recently did. We bought from her, right here in our valley, and because she prints them in her printer, I was able to compose a Christmas note and print that right onto the card. I had more fun with cards this year than I have in years. No photo - I was able to get them done after the soap. The cards are in the mail. 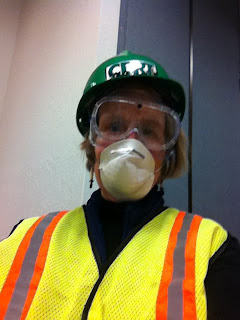 Then I had CERT training for another four hours that night and another 8 1/2 on Saturday. We were doing simulated trainings and we just cracked me up. I took a picture of myself with my phone. I have no idea how anyone gets anything done with all this equipment on. I was breathing so hard I kept fogging my goggles and since I was wearing a headband, the hat kept falling off. When I did the simulated splinting of a broken leg, I put the danged hat under the guy's foot to elevate it and facilitate the wrapping of the splint, but the thumb of my right glove popped off. I was a hotshot with the fire extinguisher simulator however, and they passed me.

The trainings have come at a terribly busy time but I felt compelled to train with the other people in our valley. The second winter we were here, we were snowed in for three days. The Sheriffs department monitored us by helicopter, but it's left me knowing that we are isolated. I missed four Christmas parties and was sorry to miss every one - one for each day of training - but I knew training was important. 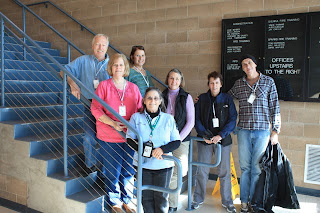 This is the graduating class of the Red Rock CERT team. All training is developed and standardized by FEMA as a result of their dreadful failings at Katrina. Sandy, our team leader, is in the foreground, the same Sandy as Christmas cards and bookclub. Our valley meetings will begin in January. It's not likely we'll ever wear the equipment I wore in the simulation, but it is likely we'll be asked to direct traffic and man phones, and Sandy has done both. She manned phones for the Stead air race crash when people were calling in from all over the world, looking for their loved ones. I've finished CERT Academy but have more trainings I'd like to take before I feel competent to report for duty. 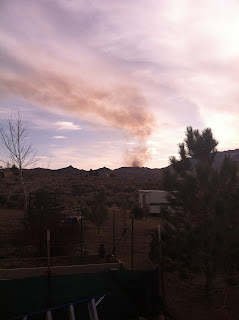 My son was driving back to Oregon this morning after being here for the weekend and texted me that we had a fire in our valley - he could see if from the highway as they were going north. Indeed, we did. One thing they drilled into us during the trainings was to call 911. Don't assume someone else did, so I called 911. I don't know anything about the fire, other than it is now out because Carol's husband is on our VFD and she told Ian he was on his way home. He works full time but today was his day off. I love our firefighters! 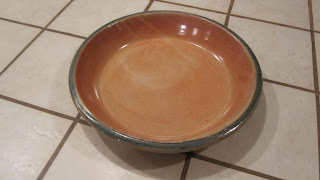 On a positive note - Ian and I went down to Joe's open studio, which is this weekend and next. We had chatted the other night and I told him I loved one of one of his pie plates and I'd like another one just like it, but I have one I don't like. The thing is, he's an artist who has had to make functional pieces in order to make sales in our current economy. No two pie plates are ever the same - he isn't fond of production, however no one makes a stonewear pie plate like he does. So I took both my plates, the one I like and the one I don't. I thought he would be making me a new one in the future, but he traded me this one for the one I don't like. It's going to a potluck on Tuesday.

We were sorry to miss his party Friday night, but I had training. I told him that when I dropped Sandy off it was 7 degrees, and when I drove by his place, I saw the lights were still on and cars still there. He said I should have stopped in anyway. I've never lived where my neighbors are so far away and yet I feel I'm in a community.

Bonnie sat next to me in the trainings. She and her husband recently moved to our valley from South Carolina. They found the foreclosed property on the internet, there are many, and when they came to see it and learned about our fight against the corporate water rights grab, they knew they wanted to live here. They knew that a valley that could come together like we did was the place they wanted to call home. She brought tears to my eyes. We did fight, we won, we are a community, and we are home.
Posted by Sharon at 9:07 PM

You - almost - make me want to move to your valley!

This year for I think the first time, I have been able to make it to all the Christmas parties. Usually, one or more conflict with another. I take that back. Some friends of ours are having their open house next Saturday night, and we will be in AZ.

It is amazing to me the long dry cold spell we've had. A dusting of snow this morning and then back to sunny and dry. I'm waiting for a fire here myself if truth be told. Congrats on the CERT certification! And yes, firefighters rock esp. volunteer ones. ;) I can tell you from experience no matter what the time of day or night or the emergency, they are happy to go out and help..really.

You look awesome in your CERT gear. Most impressive.