Yesterday was one of the oddest days I've had in years. I haven't been to the gym in six weeks so Melissa and I agreed to meet up for a water exercise class at 10:00. I drove about five miles on our two-lane road when the conditions of rain last night, followed by snow became apparent by tire tracks on the road shoulders. I didn't think I was driving too fast, but I've seen too many accidents to chance being one. Around the bend and up out of the canyon, I was stopped by the string of vehicles. And more were quickly pulling up behind me.

Our road is an alternative to the highway and it was clear that the highway had been closed. I waited about five minutes. A pickup in front of us pulled out and drove up the winding road on the wrong way. I waited another minute, and when he didn't come back, I did the same. It was beyond scary to drive on the wrong side of the road in icy conditions, but when I got to the top, I realized that the problem was that the trucks didn't have chains and couldn't get up the hill. The only driver chaining up was the UPS guy - he was also also the only athletic looking driver. Think about that for a moment. I actually made it for class and then swam for another 20 minutes. Errands later, the last thing for my day was to visit a guild member's studio. It's been in the offing for months so I was really happy to finally get to hook up. Rae has been very successful with her dishtowels, and since she weaves on a Gilmore loom, I've wanted to see how she works. 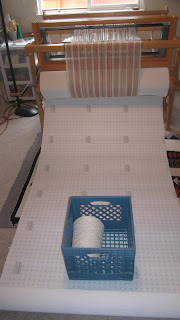 I was especially taken by her method of winding on, because she warps from front-to-back, and obviously quite happily. She has a roll of corrugated cardboard, and then she weights it's draw on. I think this is the missing piece for me. 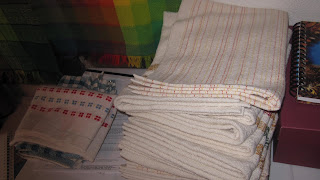 Rae's towels are fantastic. She uses 5/2 cotton from Henry's Attic so I asked her if I could share her next order and split the shipping. That's what is a killer out here - shipping costs. We are so far away from suppliers on the East Coast. 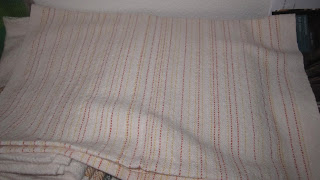 I love how she has supple-
mented the natural 5/2 warp by laying in 8/2 colors, right in the dent. I loved seeing her work, but I especially loved having the opportunity to make a new friend. 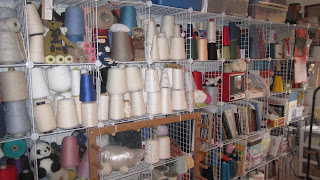 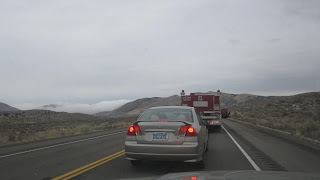 I got stuck in traffic on the highway, after miles of road closure and accident warnings. I've seen devastating accidents over the years but I wasn''t prepared for this one. It appeared that a cyclone had landed on one specific truck. It's the same accident that caused the trucks to divert onto our road this morning.

I took pictures and then decided to not post them. It was as if a grocery cart had exploded over the landscape. Trucking is a tough business. It hurts because we have friends and family in trucking. Someone's dad/brother/father/son isn't going home tonight. It hurts. 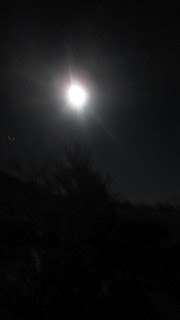 And tonight it is a beautiful night, full moon, three planets in the sky. Life is quirky.
Posted by Sharon at 10:18 PM

Isn't it fun to visit a weaver's studio? I am always inspired to try new things!

That's an awesome tip for winding F to B. I can see how weighting it that way would be very helpful. How is the weight of the tea towels with 5/2 cotton? I've always thought it might be too thick to be really useful but haven't actually seen any made up that way.
Seeing other studios can be very inspiring.

You know how to tell a story. hihi.
Always nice to visit another studio, I've been 'visiting' several on the internet because my room needs a makeover :-)

Have a nice weekend

I have truck drivers in my family, too, and my Dad has made several "runs" with a couple of them just for fun. Not a job I would like at all.

I think most of us have studios that are "recycled" rooms in out houses - mine is the living room, but this is due to the fact I have to fit 5 floor looms someplace.