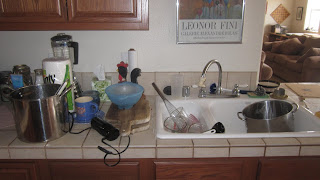 This the part of soap making that I like the least - everything is covered in oil and is slippery. I have to be careful to not let things slip out of my hands. I made soap again yesterday and when I starting cutting the block into bars today, I could see that the soap had serious problems, so got out Cavitch's and started trouble shooting.

It's so hard to make soap this time of year when the garage and the supplies in it are so cold. I came to the conclusion that the lye had cooled way too low and saponification simply didn't happen -it needs heat which is why the soap is wrapped up for 24 hours immediately after pouring. She said to throw it out. Ouch! Ian did it for me $$$$$$$ to spare me more pain. I can't make anymore until the coconut oil gets here from the Soap Salon in Sacramento - I'm out. It's only the second time in over 12 years that I've had a batch fail. The thermometer I've used all these years broke while I was making the lemon soap so I was trying to use a different one. You know why they say, live and learn? Because it's true! 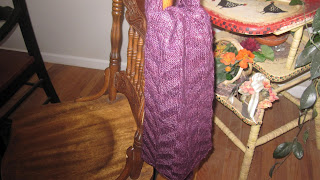 Oh well. I did get a decent picture of the scarf by putting it next to the dining room window for natural light. It's only been cold enough twice this winter to need a scarf. I hope I get to wear this one. 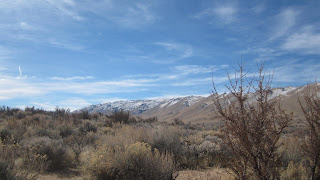 I caught this while walking Buster this morning. It's a beautiful lovely day when it shouldn't be, but I'm hearing that from just about everyone. 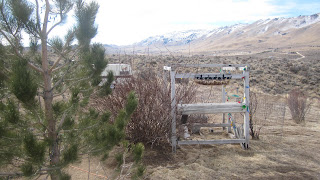 I thought I would explain why there's an 1850s barn loom in our backyard. It had been in my brother and sister-in-law's gift shop in Washington but was taking up too much room, so Bob disassembled it and brought it to me. He thought I'd like to weave on it, but I have no space for it either. The pieces sat on the ground for a year or two. In the end it turns out he didn't bring me all the pieces. 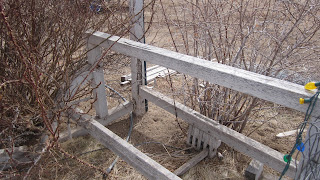 Finally Laura and I decided to find instruc-
tions and put it up in the yard. We found pictures online but nothing really specific. We finally discovered that the pieces have notches and we just had to match the correct notches together. We never did find the pieces for the beater bar. 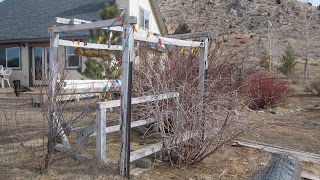 The pieces were really heavy and in our struggle to erect and stabilize it at the same time, the beam slipped off on conked me squarely on the noggin - it about knocked me out. It has weathered badly in the last eight years so Ian reinforced it with t-posts. He's added bird feeders and Christmas lights. 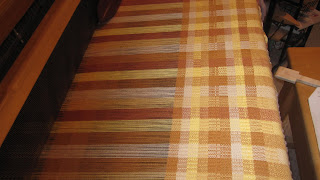 I've started weaving on the towels. This is my first experience with a block weave. I made mistakes right from the start so decided to relax and just keep this towel which gives me the freedom to treat it as a sampler. I'm pretty sure I'm beating too hard so when I can get back to this on Saturday, I'll try to change that. This really is too busy for my taste, so I thought I'd experiment with more weft shots in a block and also fewer colors. I'd also like to do one with a solid weft, in fact, maybe a couple with solid wefts. I'm using the same five colors in the weft as in the warp - too much. Hmmm, maybe since I've just started, I'll made the middle a single color and then put these same blocks on the other end. Or just make it solid from here on. Rae Stuart says she only puts her pattern on one end since only one end gets displayed anyway.
Posted by Sharon at 8:19 PM

Some of my favorite colors in that towel warp :)

It's an awfully pretty warp, stretch yourself a little and do the colors for at least one towel and drop them as you go along maybe? So sorry about your soap. That really is a shame.

Sorry about the soap failure - I can imagine how frustrating that is. As for the barn loom in the yard, what a perfect way to proclaim to the world that you are a weaver.

Aye...so sorry about the soap: Not only for the lost materials, but the effort expended in the process.

What block structure are you weaving? It looks like a twill derivative. Just because they are blocks doesn't mean they all have to be square or the same size. You could plug some fibonacci numbers into your weft stripes, even if you only stripe the ends. Just like knitting, dealing with all the tails at the end of each stripe can be a pain until you come up with a system that works to your satisfaction.

I once had a wonderful batch of soap, with a perfect swirl pattern and an amazing lilac scent, get eaten by mice. Every single bar was chewed up. That was somewhat discouraging. I like the different ideas you have for that tea towel.

Bummer on the soap but great yard art!

I too had soap fail this winter! I never in the past had as much trouble with soap as I have recently. Most of it is just fine so I guess it's been a live and learn year. Love your towels.
The security word is "mewsnot" is that a cat with a respiratory infection?

So sorry about the soap. What a bummer! Your towel is looking good. I agree with the poster that said to keep up with what you are doing for the length of one towel. Sometimes what doesn't please you on the loom, looks great off the loom and you won't know until you give it a try.

I like your towel....but busy and I get along really well. At least in things for my house....not so much in what I wear!

The scarf is lovely. That's a gorgeous color.

I love the outdoor photos, especially the ones of the loom. Always an adventure!

Hey just wanted to give you a quick heads up. The text in your post
seem to be running off the screen in Ie. I'm not sure if this is a format issue or something to do with internet browser compatibility but I figured I'd post to let you know.
The layout look great though! Hope you get the issue resolved soon. Thanks

Also visit my page - how to replace head gasket