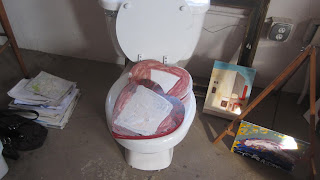 This is an installation piece that Erik is working on. He told me that Diana was going to be late and since I had read until midnight to finish Sleepwalking through History to loan him, which I consider to be of current and critical political interest and he being a rabid activist - so we chatted. That's my unfinished hotel painting to the right - we'll get to it next week.

A couple of artists, including Craig Smyres, dropped in - it is a studio loft after all - and so there was this level of comfortable exchange. Diana and I kept working but I so wanted to see Craig's work -some of it is lost-wax bronze casting - so Erik got us a free pass. Craig's work and Craig are awe inspiring and I wished I could have spend more time chatting but he keeps the temps in his studio unbearably high because he has muscular dystrophy and is very thin. He made me feel like a million dollars and Erik said that Craig has talked him through many traumas. I'm not sure I can afford it, but I hope to be able to acquire a piece of Craig's work - just because. 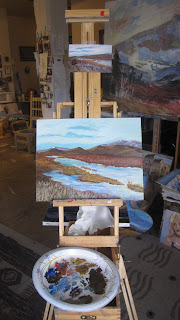 Erik assigned this week as repair week - we would take a look at the previous pieces, find the elements that weren't successful and make them work. I was frustrated at the two-dimensional aspect of this painting and said I wanted to get it to lie flat. It looks less like the photo but more interesting than the photo. Erik's approach is more interpretive than literal, and that's fine with me since I have the photo. 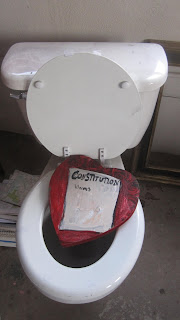 While we were there and in between visitors, Erik was working on getting this together so that I could post in on my blog. It's going to be an installation piece about what Americans feel are values gone into the crapper- this is as far as he got. 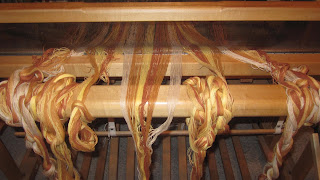 I spent several hours today dressing my loom. I realized that the comments about this being Charlie colored warp were oh so very true when I was clearing off the old warp from the back of the loom. The new warp was dangling from the front beam, and when I'd jostle the loom, I could have sworn that Charlie was walking under it. It's true. I'm weaving my cat! 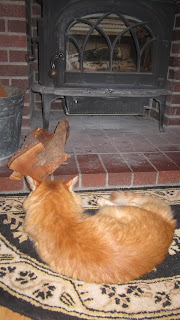 King Charlie. He scored the prized place.
Posted by Sharon at 11:52 PM

You had me going there for a minute with the toilet.
Did you see my new loom????
I am so excited, even my headache couldn't dampen my enthusiasm yesterday.

I was wondering why all of the "pot" shots. Very funny - and I agree about the constitution. I feel like everyone should send everyone in Washington a copy of it so they get the idea that we want it upheld. Can you imagine the bombarding that would be!