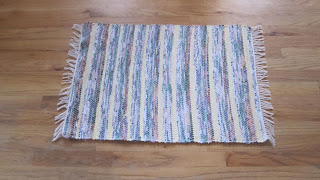 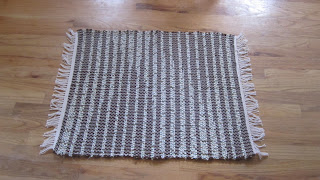 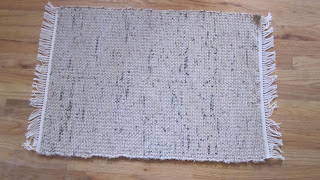 I realized that I haven't photographed my rag rugs because I've been so focused on getting the tea towels done.  These are three of the five I was able to finish, all from recycled cottons.  They measured 2' x 3' on the loom but because of their being from different cottons, even though preshrunk, each is all slightly different. And remember, I only started building inventory in June. 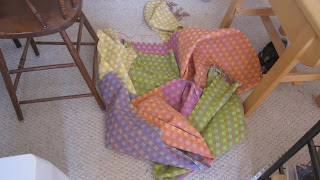 I pulled the last warp off the loom today.  I knew I was pushing an almost impossible deadline since I started winding the warp last Friday.  It was close but I did get them hemmed and done.  I won't do that again - ever.  These are my Country Gardens colorway. 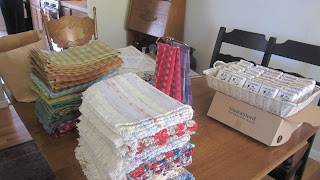 I've appro-
priated the dining room for my staging area.  I bought a cash box yesterday and went to the Bonanza Casino on my way home to get change.  We're going to use the Square so I have no idea how much change we'll need.  This is my first major craft fair and the first time to collect tax. 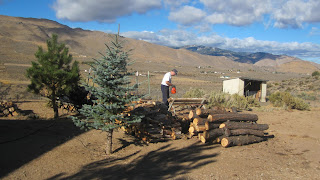 I love the whole idea of self suffi-
ciency.  While I'm weaving and weighing different craft fair venues, Ian is up in the Sierras cutting firewood. We have a furnace, but we elect to heat entirely by firewood.  Our woodstove and the open construction of our two-story house are ideal for this.  I don't know how Ian figured it out, but if you know him, you won't be surprised.  There's a naturally occurring black-oak stand within the NFS permitted area and that's what he's cutting from here. 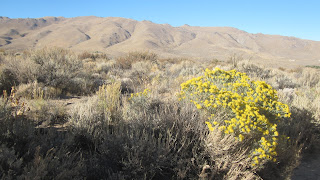 We're having an Indian summer.  That's rabbit brush which should have finished blooming last month.  We haven't had a freeze though the first one is predicted for tonight.  Ian swept through the garden this afternoon and pulled the late bloomers. I'd be worried if I weren't happy for the open-air conditions this weekend at the craft fair. 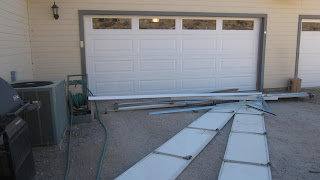 Big expense today.  We had to have the garage door replaced.  It was damaged and in spite of our trying to get the door to limp along, we realized that a replacement was eminent, and hopefully before the snow flies.  Out with the old, in with the new.  Whimper.
Posted by Sharon at 8:59 PM

Impressive pile of stuff there! I hope you sell it ALL!

I think you'll love the ease of using the Square...it was a successful tool for us last weekend. That's an impressive stack of woven goods for the show!!!!

Good luck with your sale!!
What a lot of work!

The Campbell household sure has been busy lately. The garage door looks lovely, but not as pretty as your towels and rugs. Good luck!!

I don't know which I like better, the rugs or the towels!

I really like the rug in the middle. I think it's fun there is a pattern that shows up. I never worry about how long my rugs are, they just become what they become. Not gonna stop weaving when there is just a bit of material left on the shuttle :) As an aside, I can't believe your state hasn't found you selling without getting their taxes, LOL... I was told by a revenue agent here that "if all you make is 3$, you still owe the tax on 3$". What's interesting is the number of people that ask if I have to add tax if they pay in cash~~~ well, yeah, still have to report it and pay it!