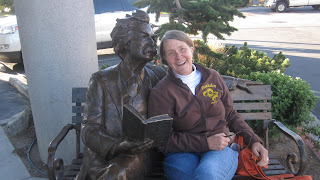 Erik took this picture on our way to his plein air class.  He had a book of Mark Twain quotes on the table where he had been reading when I picked up on Saturday.  I told him about the paper I wrote on "Roughing It" in college, so when we stopped for nosh at a mini-market with this statue, well you get the story behind the story.  It was too funny not to share. What is it he's whispering in my ear? 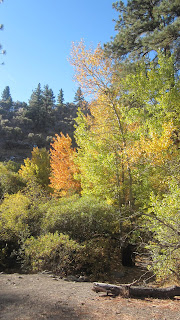 Long story short, I wanted to buy a painting of Erik's but when I saw in for real and realized it was in oil, I balked.  He's pretty expensive but said he could sell it in a local gallery and would paint mine as a commission.  The price was a significant discount, so I said since he's without wheels right now, that I'd offer him a ride to paint plein air. 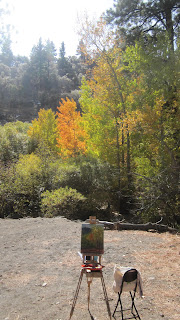 He said, as a matter of fact, I'm teaching a class for the art museum, and BTW, you can be my pupil and I'll critique you as if you were enrolled.  So here I am with his easel. 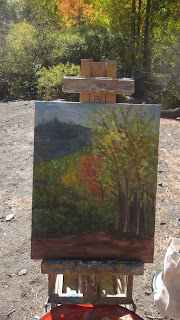 And here's my piece.  I know I'm a rank amateur but it was absolutely fantastic to push paints around in the outdoors - so much different from trying to force a photo into a painted image.  I pretended to the rest of the students that I knew what I was doing and they included me without qualification.  Meanwhile, Erik has just messaged me about another class and it appears that I can trade gas and transportation for instruction until he once again acquires wheels.  I've needed this to get me back to painting. 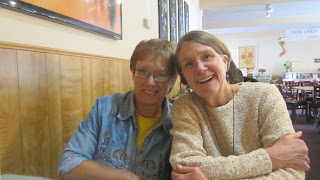 That was yesterday.   I've looked forward to today for months.  This is Chris and me - where to start?  She and I grew in in East San Diego County and went to 8th grade together.  Thanks to the network of Facebook and our mutual friendship of a certain Stan, we connected and today was possible.  She and I were in 8th grade choir where she sometimes played the piano.  She decided earlier this year to be a seasonal worker for Amazon here in Fernley and the plans for today were seeded.

She took an entire album of photos that she posted to Facebook.  Maureen took this and it's all I have.  I knew Maureen would enjoy Chris and I wasn't wrong so they ended up meeting me for Mass, followed by this lunch and then an afternoon walking through the arboretum.  The day and weather were lovely.  We walked and talked and finally sat and talked.  I cannot think of a more lovely present than friendships.
Posted by Sharon at 10:52 PM

What a nice trade - instruction and class time for a bit of gas. I like your painting, too.

I don't know what old Mark was whispering to you, but it must have been funny. Typically Mark Twain, right?

It's good to get together with old friends. It sounds like you had a nice time together.

For a rank amateur you are very talented :-)

Yay! Good for you Sharon!!!! I just spoke via email an artist that was at that class - Monika. She told me that he is teaching at Sand Harbor on Nov. 11. Are you going? I have to take my sis to the airport that morning, but maybe I can go too (with my oils)