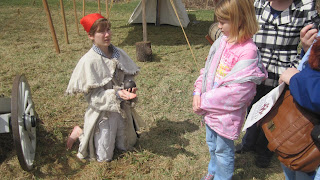 It rained hard all day Friday.  Paul and Karen had flown to Illinois for a graduation so we stayed in our pajamas and played cards all day.  And ate junk food.  We had hoped to attend the Revolutionary War reenactment at historical Deerfield on Saturday and the forecast for sun was right on.  It was a fantastic day.  John came with us but Shannon and Olivia stayed home as both were still recovering from their colds.  This young "boy" explains to Lu the difference in weapons and what they size munitions they fired. 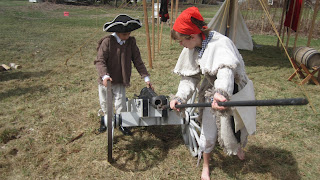 The program was meant to be authentic and instructional.  I was impressed by the skill these kids had as they demonstrated loading this small cannon. 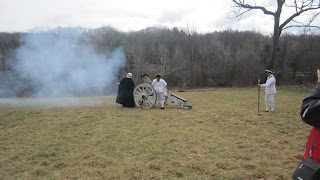 They fired off a cannon - very loud. 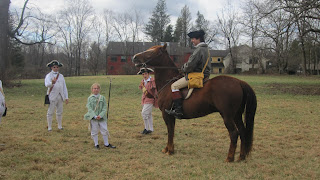 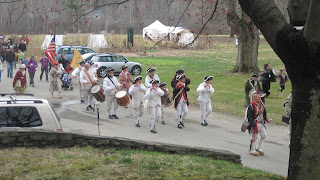 The drum and fife corps led the rabble out of the muster area. 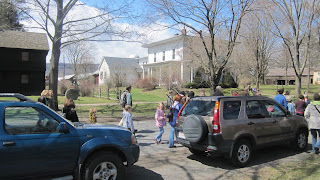 They were asking for volunteers who would willing to join the militia and fight for freedom.  Christina and Alexia signed on.  The British are coming!!!   The structures are part of this living museum with costumed docents, including a tavern and silversmith that we visited and more that we didn't. 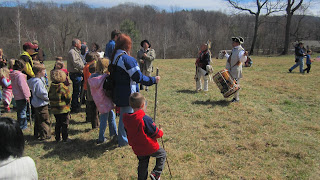 The volunteers are getting trained by a scout and a drummer.  The drummer explained that the drum beat is what they need to listen for instruction - it's the sound that gets through all the cacophony of war.  They are drilling with sticks in lieu of rifles. 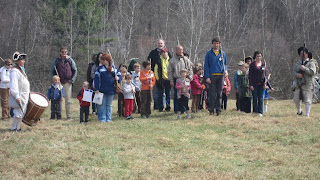 Ready to muster - and, march! 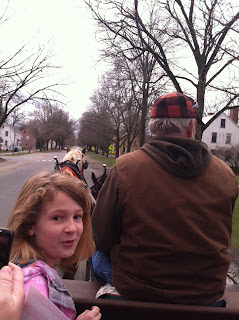 We got a very special ride back to our car.  We were all tiring and still wanted to make some headstone rubbings. 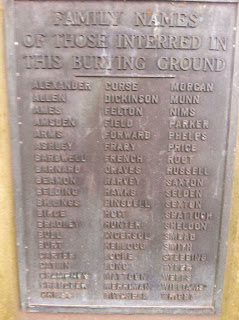 We had visited the graveyard behind the prestigious Deerfield Academy earlier in the week when Karen was showing us the sites.  We were armed with paper and crayons and had been looking forward to this for days.  We had seen this plaque at the entrance and thought it was to label the headstones that were too worn to read otherwise. 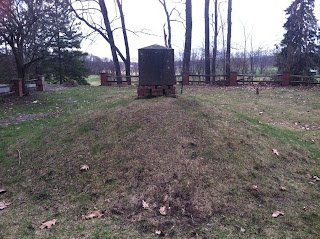 We learned that the plaque actually identified the people buried in this mass grave.  The inscription simply says "For the dead of 1704."  I have never had much interest in American history but that has just changed.  I know about French and Indian war, but when I realized that I was walking on the site of a skirmish, I was instantly fascinated.  The French took women and children captive, back to Canada.  I realized that had they won, we would all be speaking French. 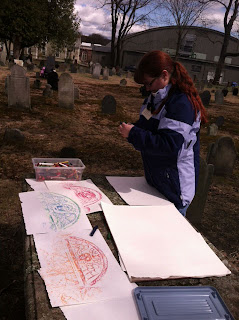 We whipped out the paper and crayons and went to work.  I think we might have set up our work station on top of a grave of sorts - not sure.  John wasn't interested at first, but he succumbed to our enthusiasm before long. 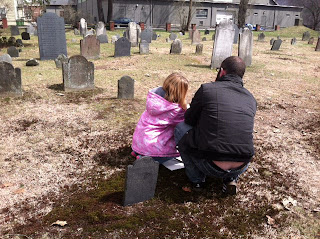 They worked on this headstone together.  Alexia did very well but John moved his paper while rubbing and it's pretty much a blob.  She adores John and he's very patient with her. 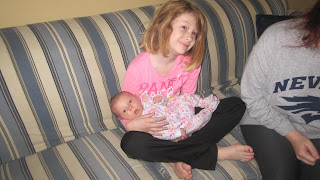 She also adores her little niece.  I can't believe how busy this week has been - I've wanted to post more about our trip each day but it's not happening.

I subbed today for the first time in an elementary school and it was a blast, though I am exhausted tonight.  I had eight classes for library visits and finally had the opportunity to read to and interact with the pupils - lots of pupils.  I'll want to sub there again.  In the meantime someone needs to do my laundry, but tomorrow is CERT traffic control training.  Good grief.

Sounds like you had a great trip! There were a lot of diversions to help relieve some of the intensity of a new baby and all. She is, by the way, just beautiful.

We were just in that area of the country last fall for vacation and had a great time there.

Deerfield sounds like my kind of destination. I love historical sites that are well done and interactive. How nice that you were able to do so many memorable thins in such a short time.

Dave was quite the busy guy that day!

Dave was a busy guy that day!

Dave was a very busy guy, but he had an awesome horse, and boy oh boy, could he ride him.