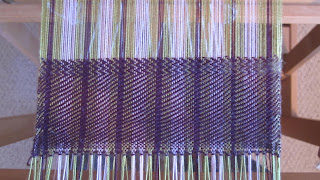 The first weft I tried was the purple from the small stripe.  Let me say that I've just learned I'm not a fan of little stripes.  The purple didn't work for me so I unwove it. 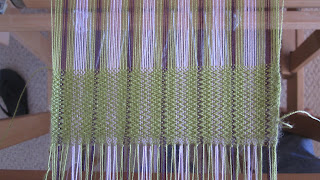 So then I tried the green, and I tried it in a twill which was way to fiddly for my taste.  I unwove it.  Tencel isn't all that forgiving and the weaving was hard on it. 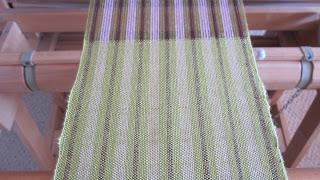 Then I decided to weave it in simple plain weave.  I figure if Sara Lamb has made a weaving reputation as the Queen of Plain Weave, that's good enough for me.  The selvedges are out of control.  I had floating selvedges since I started  in twill and decided to lose them both. 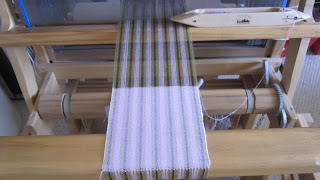 I fought with the green selvedges and then realized that I need a sample of handwoven fabric for a class I'm taking at the Conference of Northern California Handweavers next month.  Guess what I'm taking for a fabric sample.  Moving on to the next scarf, I went to the pink and I think the predominant color in the warp makes a much nicer weft. 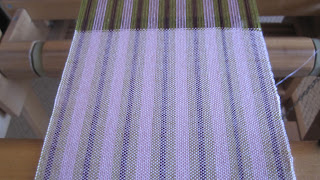 Again, the selvedges weren't playing nice.  The left side is perfect, but the right.  Oy!  It wasn't until I changed my beat that it began to resolve.  I know you're supposed to beat on a closed shed so I was trying to follow the instructions.  Finally I decided to beat on an open shed, which is what I do for towels.  Problem solved.  The last two inches here look pretty good to me.  Ignore the color.  My camera is a liar and is going to go to camera hell very soon. 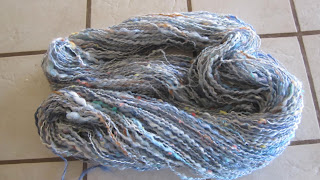 I finished my skein of art yarn and I'm more interested than ever in learning how to make my own batts.  I realized that the book Rae Stuart loaned me several months ago on spinning art yarns is by Lexi Boeger and last night I discovered that she's an instructor at the weaving conference I'm attending next month.  I was able to make a class switch today and will be attending one of her sessions. 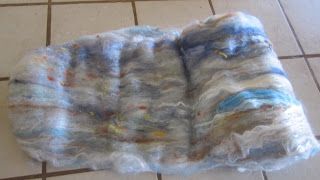 This is the commercially prepared batt I spun made by Cottage Creations.  I'm sure I can make up something equally messy from all the stuff I've managed to acquire over the years.  I'm taking a bag full over to Mim's tomorrow after lunch and get her take on this whole thing.  She took a class from Lexi last summer. 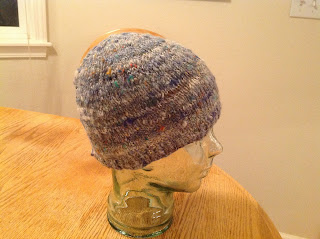 I've knitted a hat from the yarn which is tame compared to the stuff in Lexi's book.  Still it leaves me wanting to make my own batts and see what I can come up with.  There's always something else to learn.  I'm trying to get my head around how I would weave with this.  Obviously I can weave with it, but I guess what I'm looking for is how to weave to the highest and best use of the yarn.

I think it's interesting how we adjust our weaving to the item that we are weaving. I've also noticed that after wet finishing, my selvedges straighten up a bunch! Your art yarn will make great weft for a scarf!!!

Every project is a learning experience.....and I object to the rule about beating on open or close shed...I think you have to find what feels right and works for you.
with rugs, I beat twice. once open, change feet, once closed. It's fast, TAP Change TAP.

it is so funny that you posted about beating with the shed open or closed. when i first taught myself to weave from books, my natural instinct was to beat on a closed shed. i have done it that way forever.but i was watching a weaving video a few weeks back and noticed they were weaving on an open shed. i immediately wondered what the difference would be and have been thinking about a one shuttle towel warp to practice on. when i read your post i chuckled and thought...either great minds think alike or you and i both fell through the weaving rabbit hole together! keep me posted on your observations while i plug away on my 10 yard overshot warp.

I like the green yarn best in the weaving.

That batt looks like some fun spinning and I love the hat.

Playing with a carder is lots of fun and there are so many different combinations you can do with them to make some fun yarn. I can't wait to see what you do with one.

Tencel is a booger, too. Very slippery slidey. I've only ever used a rayon slub, which isn't as bad.