All Lu, All Week 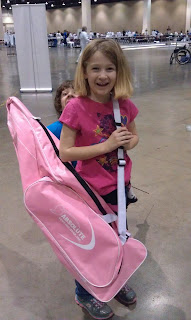 Lexi and I had a long day yesterday.  Among errands, we went to Jimmy Beans Wool for yarn - she's started to knit and weave again.  Then we raced to Target to buy exercise pants since Grandma forgot to pack hers.  This is her new gear bag.  She now has her own equipment and is as serious as ever about fencing.

After her 90 minute fencing class yesterday, Mommy met us for dinner and then we went shopping at the mall.  We're too late in the year for cold weather clothes so bought nothing but had a great time shopping.  I haven't shopped with anyone since Melissa moved away - it was fun.  Lu and I got home at 9:00 and she couldn't wait.  She was chomping at the bit to cast on and knit, and so we did.  Bedtime was after 10:00 - bad grandma. 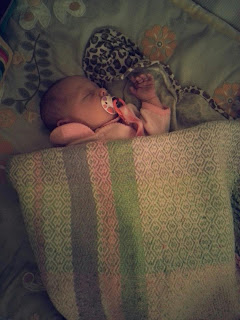 This is my beautiful great-granddaughter sleeping under the  blanket I wove for her - both are beautiful, but only Olivia is precious.  We won't get to Hartford, Connecticut until 9:45 Saturday night so won't get to hold her until Sunday. 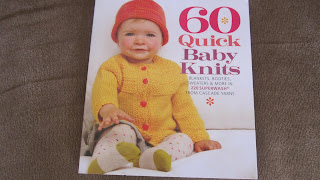 This is the book I got the pattern for those adorable baby booties from.  Everything is knitted with Cascade 200 Superwash so is cute as well as utilitarian. 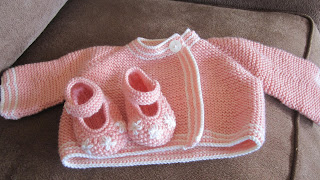 I've finished this sweater and slippers from the book and have a hat in progress.  I'll work on it tonight while we watch a movie that Ian bought for Alexia - Hotel Transylvania.  I'd like to wash and dry everything before I pack it. 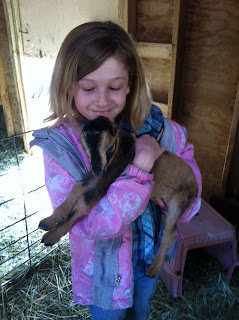 We went over to Mim's this afternoon to get eggs.  She told me that she had baby goats when I called.  Alexia was over the moon.  I told her we would go after lunch, which in my language is after 1:00.  You know where this went, right?  You just had breakfast - no, it's not lunch.  And no, waiting in the car doesn't get us there faster.
My life is so rich.  I loved this visit, and for those of you who know Mim, she's still in the boot for two more weeks for the injured Achilles tendon.  It hasn't been easy tending a flock in it, and she says it's given her incentive to cut back her flock. 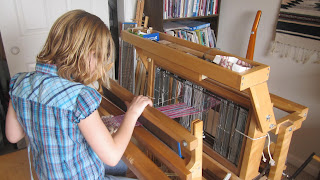 Lu could not wait to get started weaving.  Talk about pressure!  We finished breakfast, I wound a three yard warp at 4 1/2" and told her to take a bath while I dressed the loom.  She was talking nonstop while watching me so that was perfect - she got her hair washed and I got her ready weave.  She's worked on it off and on since then.  She's very excited about my new Dorset loom and already considers it hers.  It's been a year since she tried weaving and she has come back with renewed interest. 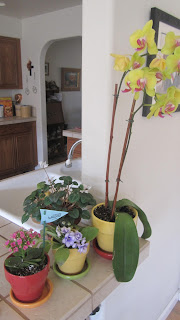 One of our projects today was to repot two plants.  The kalanchoe on the left was the token plant from Noah's Waldorf School program.  The violet in the middle was the plant we received last year.  The orchid on the right is from Costco.  I bought it a month ago and then recently watched a YouTube video on orchids and realized that it absolutely need repotting, drainage and orchid food.  Alexia and I were stunned to take the plant out of the Costco pot and find that it was inside a plastic sleeve inside the pot with the roots bound in soggy moss.  The stench of rot was unbelievable.  We both worked hard to free the roots and then move it into this pot with drainage.  When we bought the new pots at Home Depot yesterday we saw more orchids planted in the same bondage.  It's guaranteed death to the plant.  I hope we were able to save this one.

And this post launches my eighth year of blogging.

Wow, 8 years! That's wonderful. Your blog is interesting and fun. I enjoy visiting it.

Those crafting seeds you planted are starting to take hold. A. seems like a delightful child and lucky to have a grandmother who takes such a strong interest in expanding her interests.

You've reminded me that I have plants which need repotting. It's just starting to warm up here, so I'll wait a little longer and do it on the deck. Much less clean up that way.

You must be so proud. I loved the baby picture of Olivia and the that Lu is learning fencing! Good for her!

Thanks so much for the info where you got the pattern for those darling booties. I have already ordered it.

beautiful grandchildren and beautiful knitting :) btw my son is 10 and loved that movie. he giggled through the whole thing.

Congrats on reaching 8 years of blogging! That's a lot of life experiences you written about.

I am so glad she is back to weaving and is excited about knitting. She is a special kid and you are a lucky grandma.

Beautiful knitting for a beautiful baby. Precious is right.