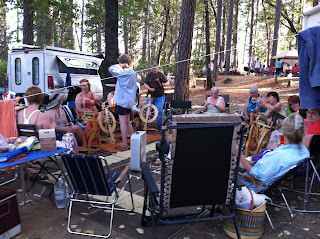 I've thought for some time that my phone takes photos just as good as my camera, so I didn't take my camera to the retreat.  I was wrong!  Anyway, this is our last evening together.  Because of the oppressive heat, we couldn't stand to be under the canopy that was designated as the group area and so were rarely all together in one place.  That was the only disappointing part of the weekend. 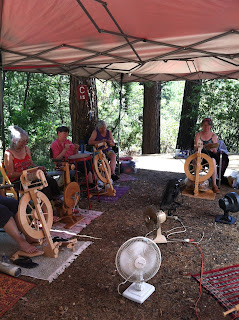 Instead of gathering around the campfire, we gathered around the fans.  It was 102 on Friday and 106 on Saturday.  Yet we had fun.

Those of us who participated in the pirate exchange gathered on the deck of one of the cabins.  This is a fun tradition and a variation on an old party game.  You bring a fiber item anonymously wrapped, then everyone is assigned a number.  The first person opens a package.  The second person can open a new package or take the first person's item in which case person #1 opens a new package, and so on until everything is opened.  An item can only be stolen three times, at which time it becomes booty. 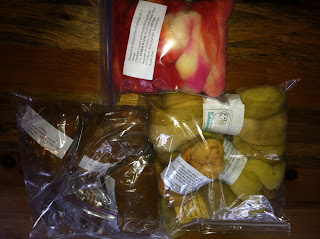 This was my "booty."  I think the gold will look great blended in bats with my black merino and some silk, maybe with some noils.  The first package I opened got pirated. 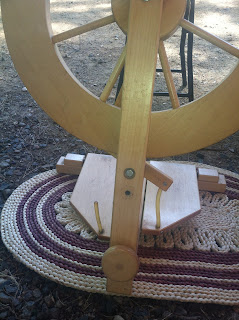 Wouldn't you know it - my wheel broke.  I was astonished.  It never occurred to me that these leads to the footman could fail.  I posted it to Facebook and Diane Soucy commented that I could make a cable from yarn and tie it up. 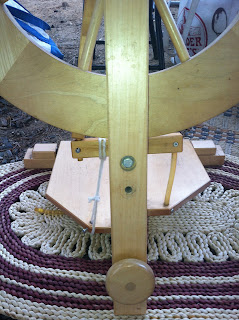 So that's what I did and I was back in business.  I had no idea how to do this but Sara Lamb showed me where the screws are and told me how to do it.  It was a much easier fix than I thought.  I also called Village Spinning and Weaving and ordered a replacement set - also a replacement niddy noddy. 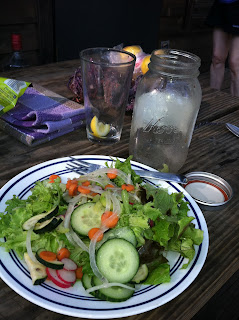 We had to bring all our food, much of which we shared.  For lunch the first day I tried something Melissa told me about - salad in a jar.  You put the salad dressing in the bottom, chopped items next followed by lettuce.  When you pour it out onto the plate and it all comes out in order.  She couldn't come but told me she had planned to bring four - one for each lunch.  Great idea! 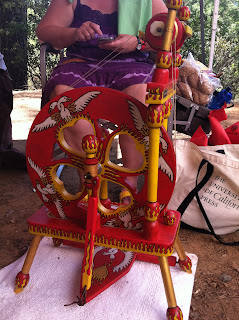 Amy brought her latest creation, her Firebird wheel.  This the third spinning wheel that she has painted and they are all fabulous. 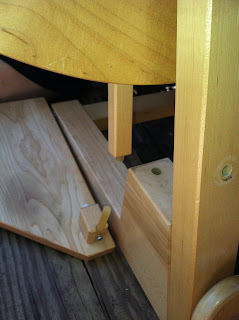 Hermi's plastic footman band broke on Saturday while we were spinning on the deck of our cabin, only she has a single treadle wheel.  She spun up a silk cord on her drop spindle and tied it back up and went back to spinning.  It could have just been coincidence or it might have been the heat.  I decided to not take any chances and put my wheel away.  I had plenty of knitting to last the last day.


I'll leave you with some entertainment from one of my cabin roommates, Barbara Sue, who is one of the funniest people I know.   I wish I had recorded longer because BSue wasn't done.  She concluded by saying - and that's what my parents got for their money.

Ian and I are getting ready to drive into town and pick up our rental car.  We leave for Bend, Oregon in the morning and I'll be taking my camera.  It's a busy month!
Posted by Sharon at 8:14 AM

I wonder if it wasn't the heat, especially with both of these wheels using the same material on the treadles. Wow! It sounds like it was a scorcher. Bend ought to be much cooler for you.

Sounds like a great time...other than the heat. The footman on my Lendrum broke around 3 years ago, I never thought of making a new one with string but then I was at home and could pull out my other wheel. I bought it in 1999 so over 10 years is pretty good before breaking. I ordered the part and replaced both pieces at the same time figuring it wouldn't be long before the second one went.

I'm going to miss you! I'll be in Montana tonight, and won't return until the 17th. Have fun with your chillens!