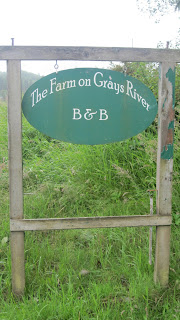 We left Bend a day early for Washington after I realized that Black Sheep Gathering was the following weekend.  Everyone was back to work and we realized that we could squeeze in a visit to the wool show on our way home by leaving a day early.  We were off to Rosburg, Washington to visit my sister-in-law Georg.  My brother Bob lost his battle with cancer five years ago, I make this visit a priority.  My mom knew Georg in high school!  I feel like I'm tagging up to the base. 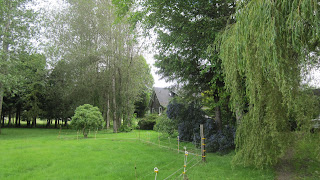 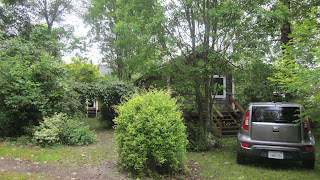 Bob was an aggie from Cal Poly San Luis Obispo and used his skills to turn an abandoned farmhouse into a working sheep ranch and bed and breakfast.  He and Georg weren't new to the B&B world, having had a successful one on Bainbridge Island.  He planted just about everything that grows here.  Granted, the 100" of rain a year has made the place verdant, but at the same time, that same rain has wreaked havoc.  They've been flooded several times and raised the house and bunkhouse, now guest rooms, 18" to be above the flood waters.  Still during a flood this winter, Georg lost nine sheep. 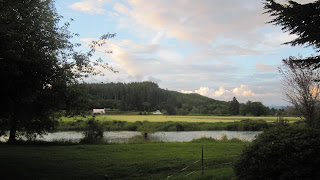 Their property is situated on the Grays River which drains into the great Columbia River from the north.  It's a tidal river and also where Bob's ashes were scattered.  I'm reminded of the nursery rhyme, when it's good it's very very good but when it's bad, it's horrid. 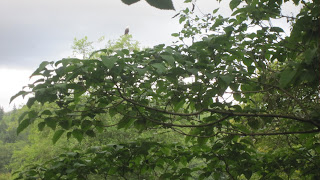 Ian took this picture of the eagle in one of Georg's trees.  It's right on the river and every year we see an eagle in this tree.  One year there was an osprey in an adjacent tree - he hunted for fish.  The eagle is interested in ducklings and field mice. 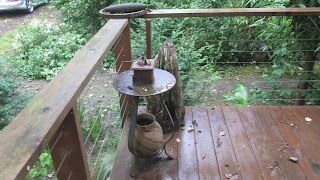 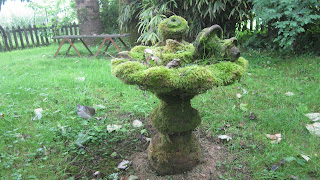 It's wet here.  While driving in I had to pull over to the side of the road due to a torrent of rain and hail that obscured all vision.  Yet we enjoyed a gentle rain during our visit.  I'm not the only one captivated.  Robert Michael Pyle wrote Sky Time in Grays River, which I've read and treasure. 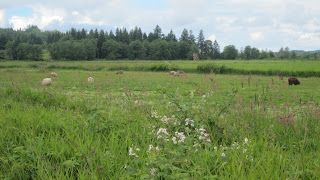 Georg has a flock of eight adult sheep.  She's still breeding and selling locker lambs, and in fact has ten lambs almost ready for market.  Her only dedicated moneys is from social security, and she is an absolute genius at creating income .  I forgot to take photos of her - she is still beautiful, of our trip to Raymond, the Willapa Hills Sheep Ranch, and the Goose Point oyster shed - I had my first fresh raw oysters. 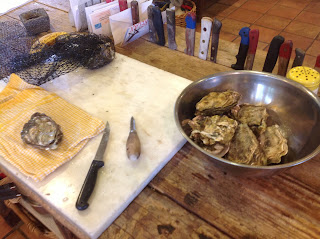 Now I get what people rave about.  Ian hadn't shucked oysters in a while and it took a bit for him to get his oyster mojo back.  I always order oysters when we're there, but cooked.  I had no idea what a treat was in store for me. 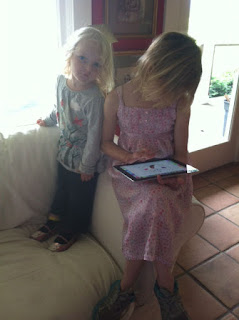 Jared is Georg's grandson.  Years ago he lived on the farm, a lost young man.  Bob is stern but fair and taught him a ton of stuff.  It was a turning point in Jared's life.  He comes once a month and takes care of his grandma's "honey do" list.  I let his girls draw on my iPad and they delightfully took turns. They were an absolute joy. 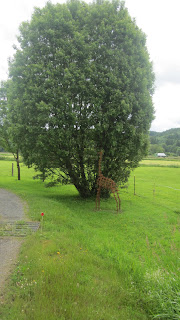 Bob was fanatical about trees.  This tree grew from a branch that Georg brought home - a gift from from a European trip - I won't out her and tell you where it's from, but needless to say, he was delighted.  The giraffe is from their import enterprise from the years they lived in San Miguel de Allende.  She shrewdly has kept a finger in that pot and has an active store on eBay, giraffes included.  I feel Bob everywhere when I'm here and it's good. Our visits are always too short.

I don't even KNOW Georg (or Bob), and your post makes me pine to visit her at her place!

Lovely place - what is her ebay store name?