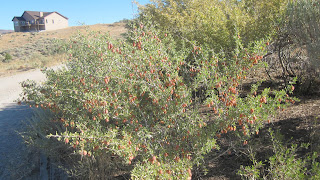 For the longest time I thought Desert Peach was named for the color of their early spring blossoms,  The name actually comes from the fruit that looks like tiny peaches, which is a little bit of pulp around a large seed.  The birds don't seem to be interested in it, but I've read that Indians made medicinal teas from the leaves and twigs.  So what the heck is the point of the fruit?! 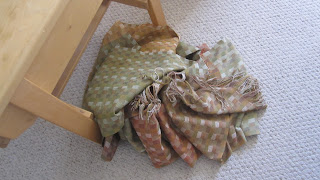 I finally finished another towel warp this morning.  I got sidetracked by my scarf quest, i.e., obsession.  I'm going to table that for now and get some towels done and uploaded to my Etsy store which is nekkid.  These are washed and cut apart for hemming in the morning. 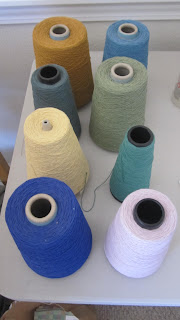 I'm playing around with cones for my next warp.  I'd like to do another sea-glass theme.  I'm using pictures from Google images but there's a lot of variation.  I haven't decided if I'll go with these yet -  still pondering. 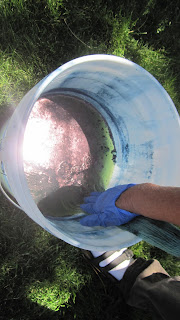 Robin and I went over to Mim's after lunch.  She let us know that the indigo pot that they used last Saturday at the guild meeting still had color.  We jumped on the opportunity.  It looks so green and icky, it's hard to believe blue comes out of it. 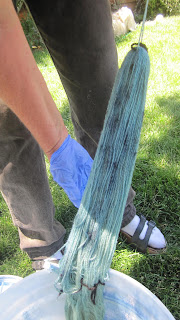 You have to be careful to not swish or stir and to remove the skeins slowly so you don't disturb the bath because it's important to not introduce oxygen. The color is faint at first. 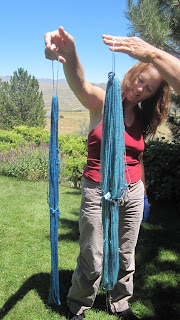 The blue comes with exposure to oxygen.  Don't ask.  I don't understand it.  I just follow the instructions.  Robin is holding her skin of merino and Mim is holding my skein of blue-face leicester.  The merino took up the dye much more quickly. 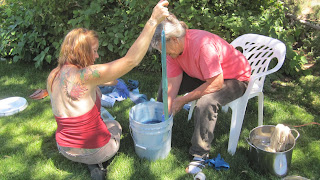 We just kept at it, one skein at a time, taking turns.  More dips in the bath built a deeper blue.  The bath is near exhaustion but we were still able to get some nice color. 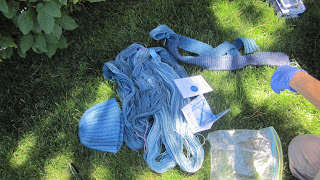 These are the things that Mim dyed at the guild meeting on Saturday. 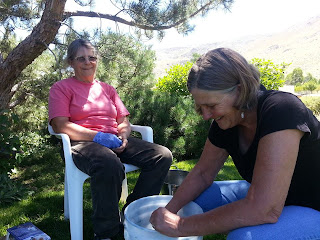 And it's my turn.  I had a pound of handspun skeins that I had spun a couple of years ago and didn't know what to do with. I'm glad I had them because today was their day. 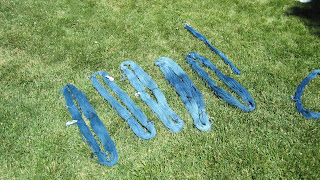 These are my skeins.  I'm not sure yet how I'll use them, but I'm thinking a scarf warp with various blues might be awfully cool. 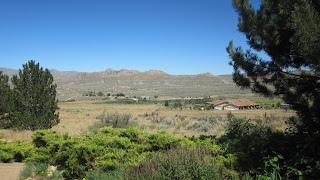 Robin and I are going back after lunch again tomorrow.  We're going to dye more skeins with what's left of the bath before Mim discards it.  Even light blue will make a nice green when overdyed with rabbitbrush.  We're taking our spinning wheels so we can make more yarn and enjoy this view.  I love the view from Mim's front porch. 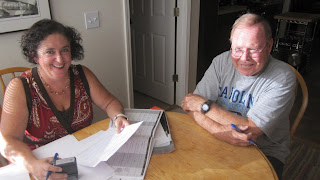 But wait.  The day wasn't over.  We've been in the throes of  refinancing our house for two agonizing months.  The mortgage company sent a notary public to our house tonight to sign the closing loan documents.  She had no idea where we lived and said she couldn't believe that this is still called Reno.  I know this county goes all the way to the Oregon border.  I wonder when it stops being Reno.  Anyway, it's done, and the closing is on the date the rate was set to expire.  Talk about under the wire.
Posted by Sharon at 10:03 PM

I hope you got a good rate on your re-fi.

Your sea-glass colorway for towels is lovely!!! They ought to sell very well.

It seems like forever since I've visited. I'm terrible with my blog visits these days.

I have to say that I think indigo dyeing is the most fun ever, not to mention the gorgeous blues!