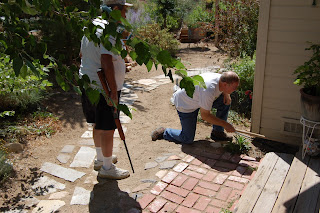 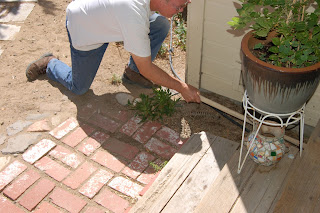 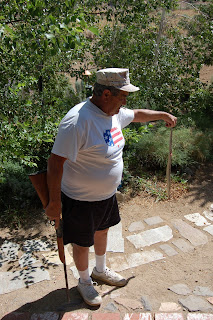 This is not what you want in your front yard and especially under your front step.  I was reading on the deck and thought I heard Ian pouring coffee beans into the canister through the open window I was sitting in front of.  It seemed to go on a long time and that's when I noticed our black lab interested in something under the step.  I called both the dogs to me and then I yelled for Ian to come help me get them in the house.  He started to follow them in and I said, no - listen.  As soon as he walked to the front of the porch the snake started rattling again.

The snake wasn't coiled at first or Sammy would have been bitten. Ian changed to long pants and boots and by the snake was coiled and ready to strike.  Ian couldn't get to him with a shovel and called Tom to come down and dispatch him which he did handily.  He shot the head right off and launched it somewhere deep under the porch where the dogs can't get to it.  He said it was a juvenile, but it's my understanding that they're more toxic than adults.  That was our excitement yesterday morning.

We've talked about getting a gun but never followed through.  Ian said that was just crazy, to have to call a neighbor to do what he could do for himself.  It's time to get a gun and I think it will be a .410 shotgun - for varmints. 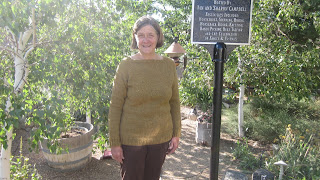 Changing the subject, I've finished this Knitting Pure and Simple pattern.  This is the second time I've knit it and I sent for CotLin from Knit Picks to make it again.   I knit this from Cascade 220. 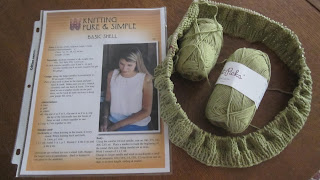 I've started another Knitting Pure and Simple sweater in CotLin.  I really like this yarn.  I was knitting on it when the snake disrupted my morning. 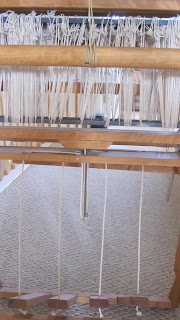 I wonder if anyone has some suggestions.  I'd like to weave with the Dorset loom I bought last spring, but I don't want to use these string heddles.  I bought Texsolv to replace them with but I can't get to the harnesses to change them out. 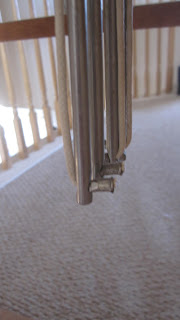 The harnesses are attached to a metal post and at the bottom of the post is end of the cord that runs to the treadles.  You can see the arrangement in the first picture.  It's secured by a pinched metal band.  Ideally I should be able to undo the knot on the bottom of the treadle, but it's so old that it won't budge at all.  I think I can probably cut this off and substitute Texsolv but I hate to change the original loom.   Does anyone have an idea how to loosen a knot that's probably a couple decades old?
Posted by Sharon at 6:35 PM

We have a .410 shotgun (Rick got it so Brian can shoot clay pigeons without getting knocked down), but my varmint gun of choice is our .22 pump-action rifle. I want one bullet to go right where I aim it....

Yikes! And I though copperheads were nasty! I can't imagine finding a rattler under my porch.

I know you don't want to change the string from the original, but, I'd diagram them, cut them off and re-string the loom rather than fight with it. It would get new parts and you'd get to enjoying this new tool.

Hmmm... I thought you could just pull the heddle bars out, but I can't get mine to move... I have steel heddles, so maybe there were "options" when they were first made.