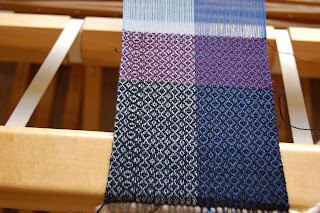 I put on a three-yard warp of 8/2 unmercerized cotton in two colors.  I've never sampled before and I decided that it was time, before I wasted any more yarn.  A friend who teaches weaving recently told me that is how she starts her beginning weaving students.  I learned a lot by using a light and dark blue. 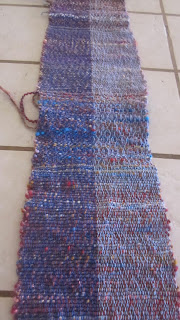 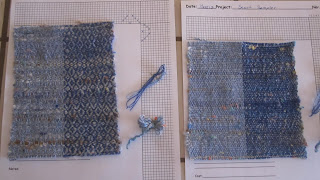 I also learned that you need a contrast warp or you lose the yarn entirely.  It's been suggested that plain weave works well - let's the yarn be the star instead of the weave, but I like the point twill on the left too. 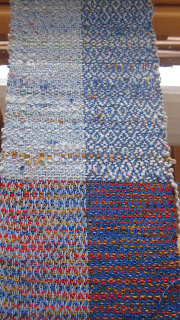 I also learned that if you use a warp that's the exact same color as part of a variegated yarn, that color, in this case, royal blue, just becomes a solid color and the pattern disappears.  Same for the baby blue in the hand spun yarn. 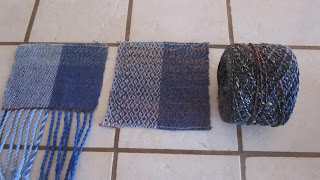 I learned that the wrong color of warp is a complete waste of a beautiful handspun yarn.  This was a variegated silk that I plied with black wool.  I also can see that the color changes aren't going to be any more attractive in a scarf than they are in this sample.  I'm still going to use it for a scarf but as the warp , with either an apple green or black Tencel for weft.  I also twisted the cotton to see if it would be okay in a fringe and it's not bad. 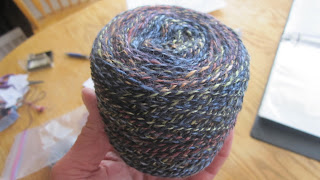 This is the yarn but it has long runs of color that looked weird in the weft.  I also learned that fewer picks per inch make a much more drapey fabric.  None of the samples were stiff - finally.   It was like a study group of one - I learned a ton! 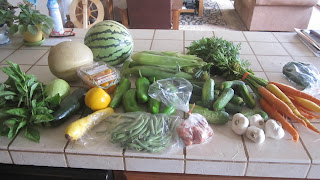 Our last CSA box was huge and I'm glad we have two weeks to eat of of this.  It's Christmas in July!

I learned a lot looking at your samples. You have got me to thinking that some of my handspun might be better used in a knitted project over a woven one.

You can learn a lot from 'samples'. :) Sometimes it is hard to predict how the colours will look when they cross one another - until you actually see them woven together. Samples are a good way to learn without expending a lot of time, effort or money/yarn. :)
cheers,
Laura

I think I'd knit with your variegated yarn - you could make an awesome seed stitch (k1, p1, then k the p's and p the k's) scarf. This would show that yarn to perfection, I think. The fabric would be nice and drapey, as well. I've made a number of scarves like that, and they turned out really nice.

I don't sample enough. I did, however sample with my raw silk on the destructo loom, and determined the set for 2 different projects.

I always do a gauge swatch when I knit, why don't I sample when I weave? Don't know. It's a mystery...