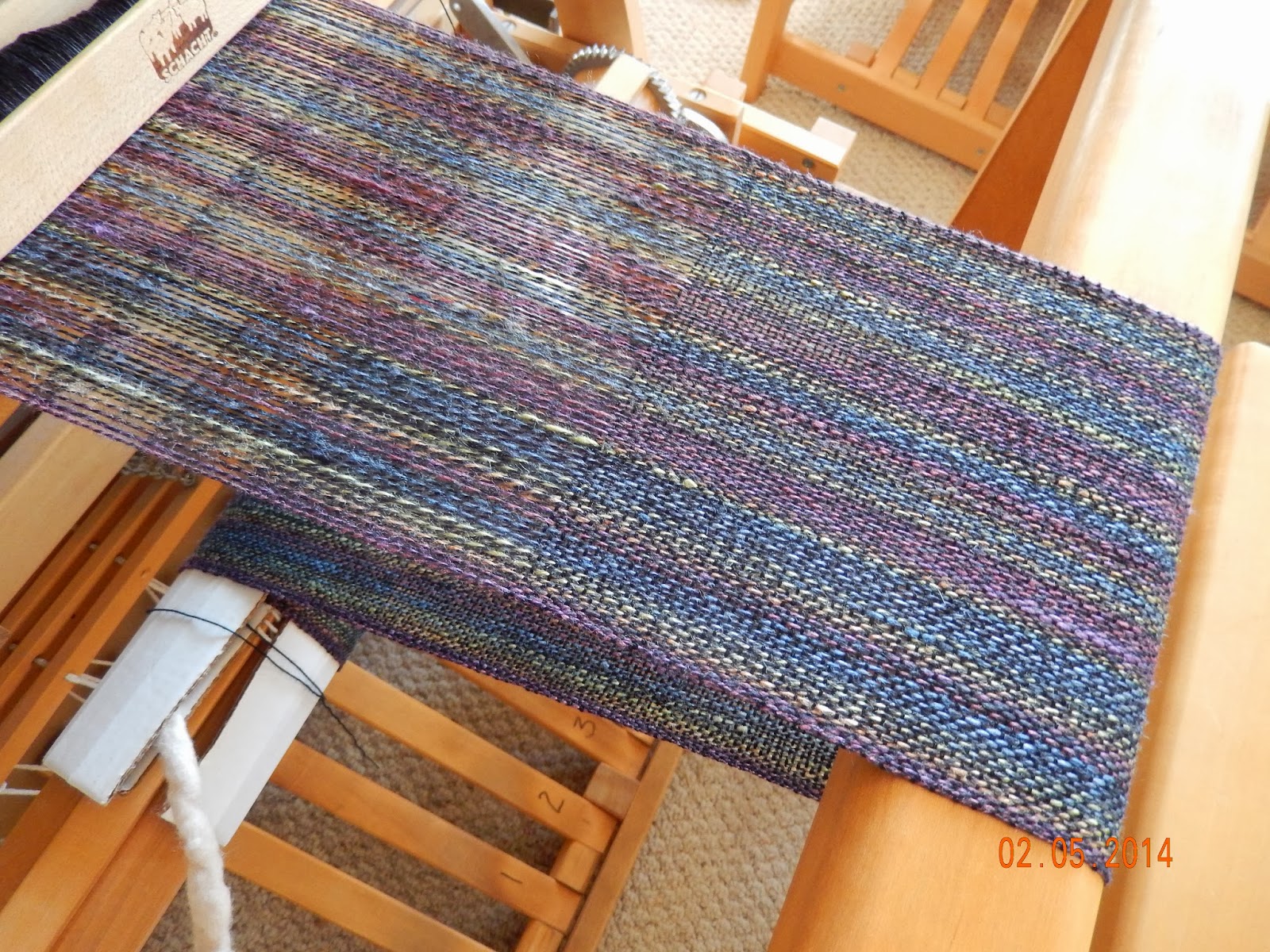 The days have been gray for the last week so I decided my antidote would be to weave up my colorful wool/silk/alpaca yarn.  I had sett it for twill but when I saw how pretty the colors worked with the black Tencel weft, I changed my mind and went back to a very open plain weave to showcase my yarn.  The problem is that I also had floating selvedges which aren't needed and a pain in the neck with plain weave, but I had woven close to a foot when I realized that and it was too late to take them out.  I won't do that again! 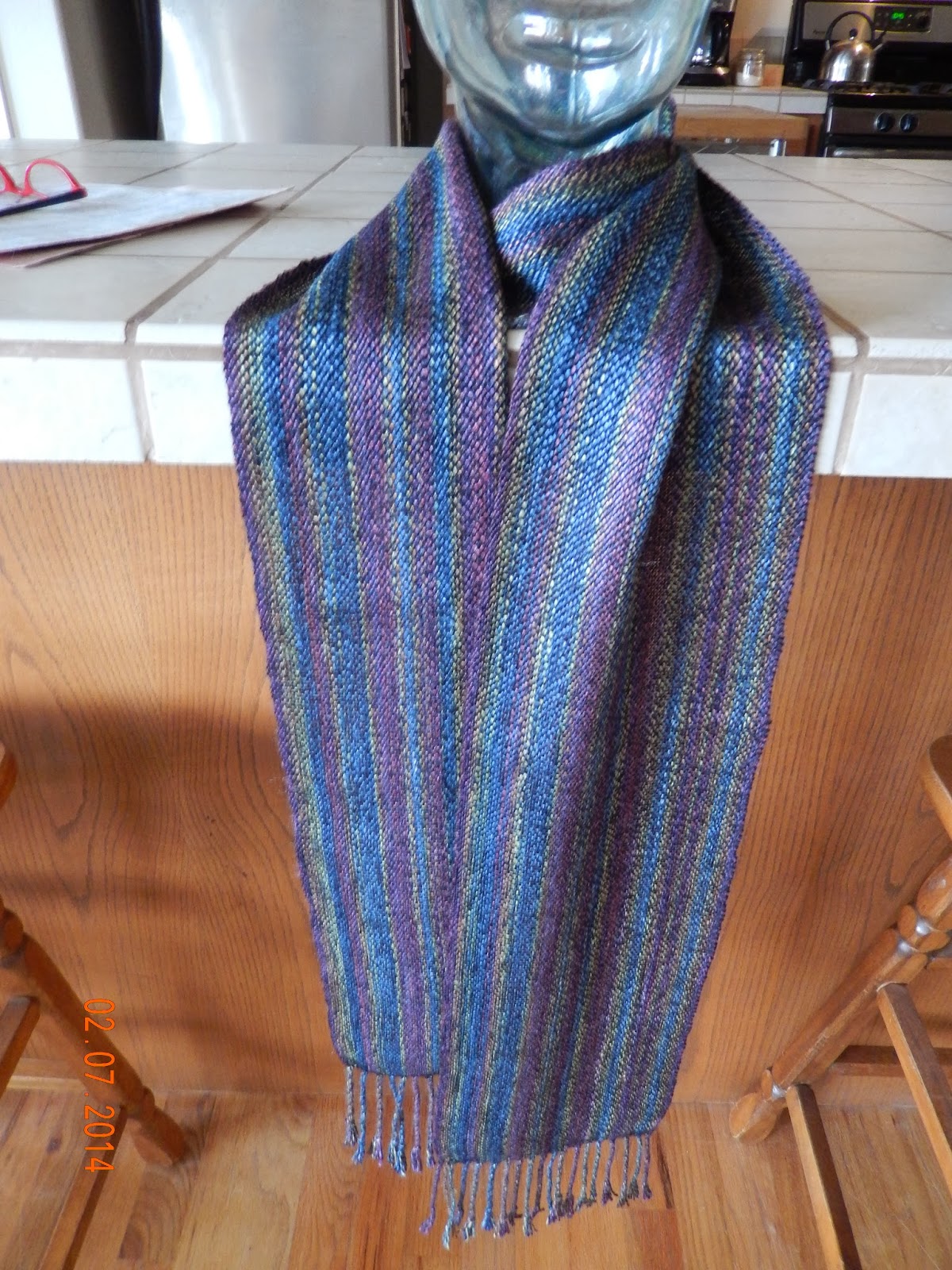 It turned out beautifully and only weighed about three ounces.  I told Ian that it was my new favorite thing I've ever woven.  I was in a hurry to finish it because I wanted it to be part of the library display next month and the intake was yesterday.  We have three display cases we can fill with handwoven related items as part of our outreach program at the library March 22nd.  I posted this picture on the Carson Sierra Spinners and Weavers Facebook page because I want to encourage them to weave with their own handspun yarns.  While it's not a private page, I was surprised to have three offers to buy it.  So I sold it and mailed it off to Denton Texas yesterday to one of my best friends from junior high and high school.  Holy cow! 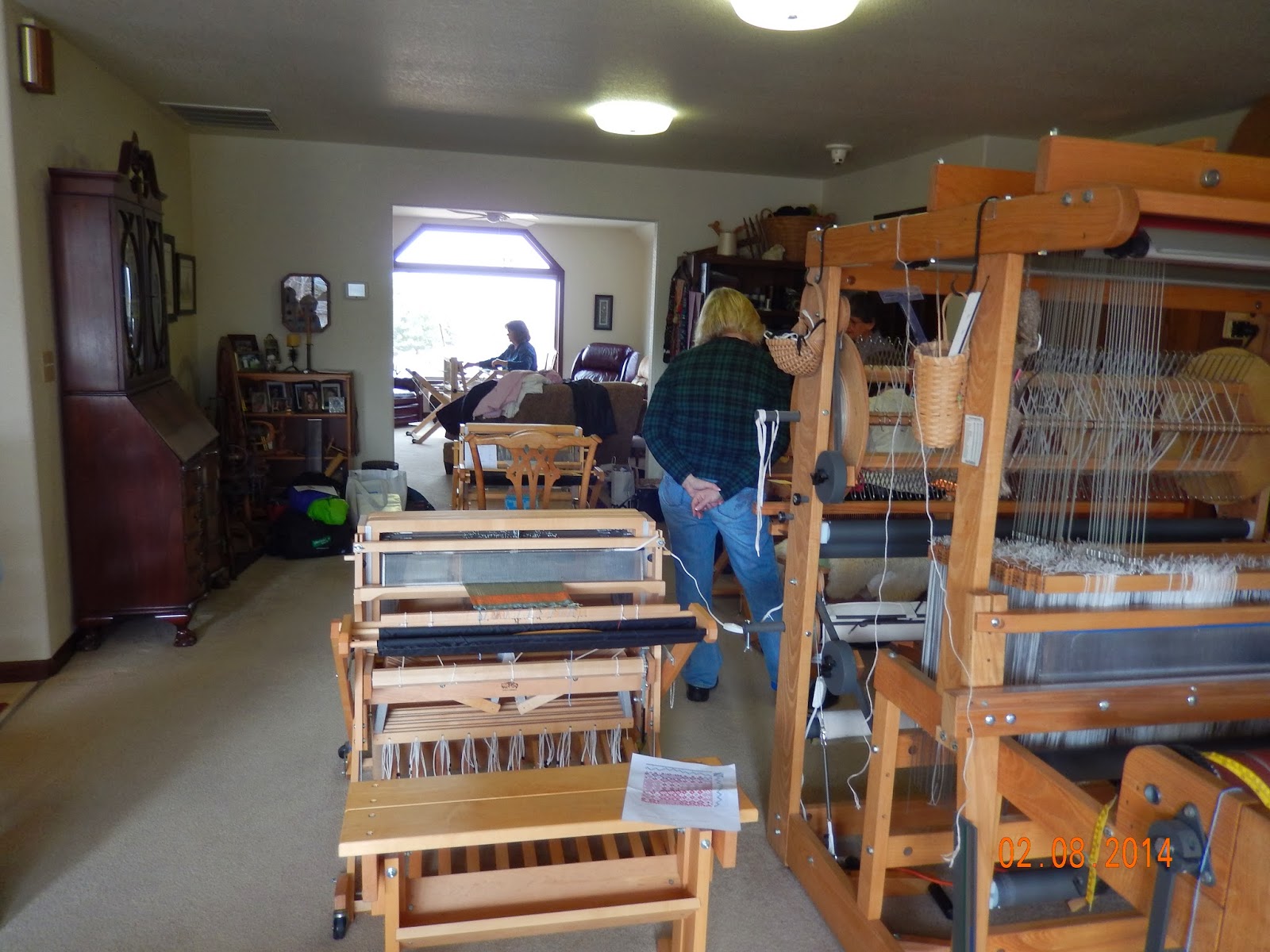 The Reno Fiber Guild met at Gayle's home yesterday.  Last year she said she'd like to offer a Crackle Weave workshop because she's been wanting to know more about it and the best way to learn something is to teach it.  Several of the members met over the past couple of weeks to warp two Schacht Wolf Pups and three 8-shaft Baby Wolfs for this. 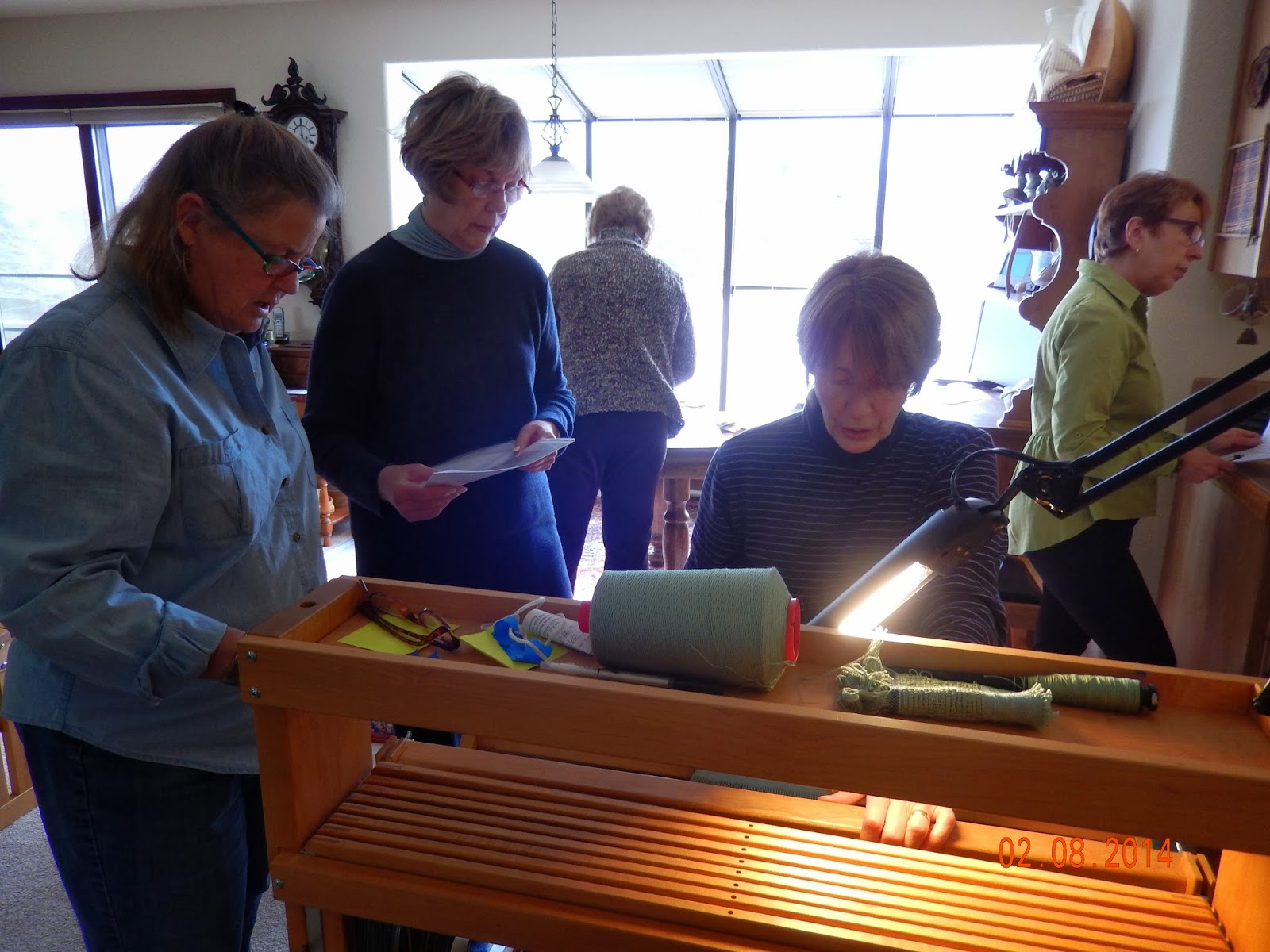 All three of these ladies are experienced weavers but there is always room to learn in a teaching opportunity. 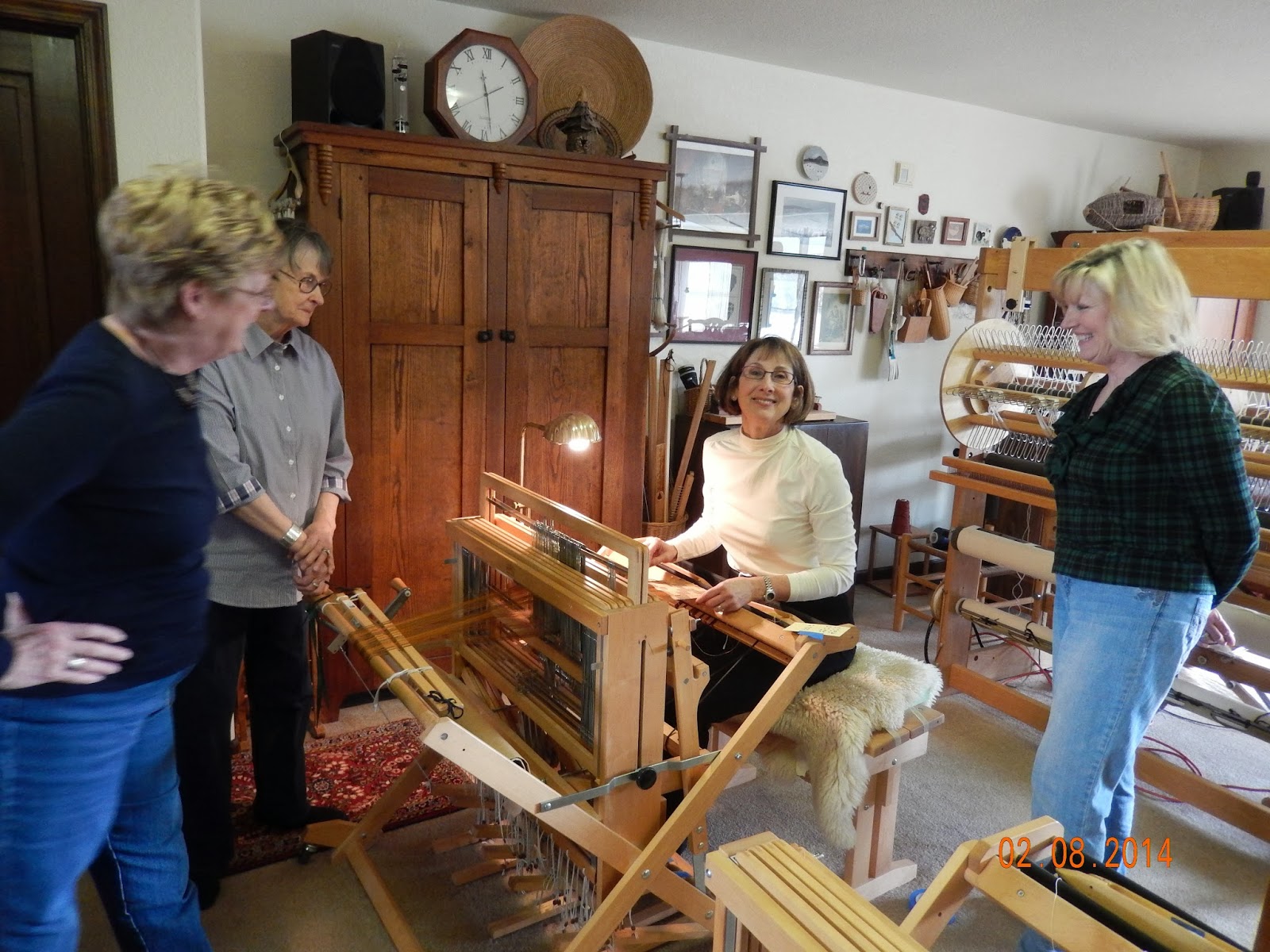 All five looms had different weave patterns.  Suzanne is working on one that makes blocks and looks a little like Summer and Winter. 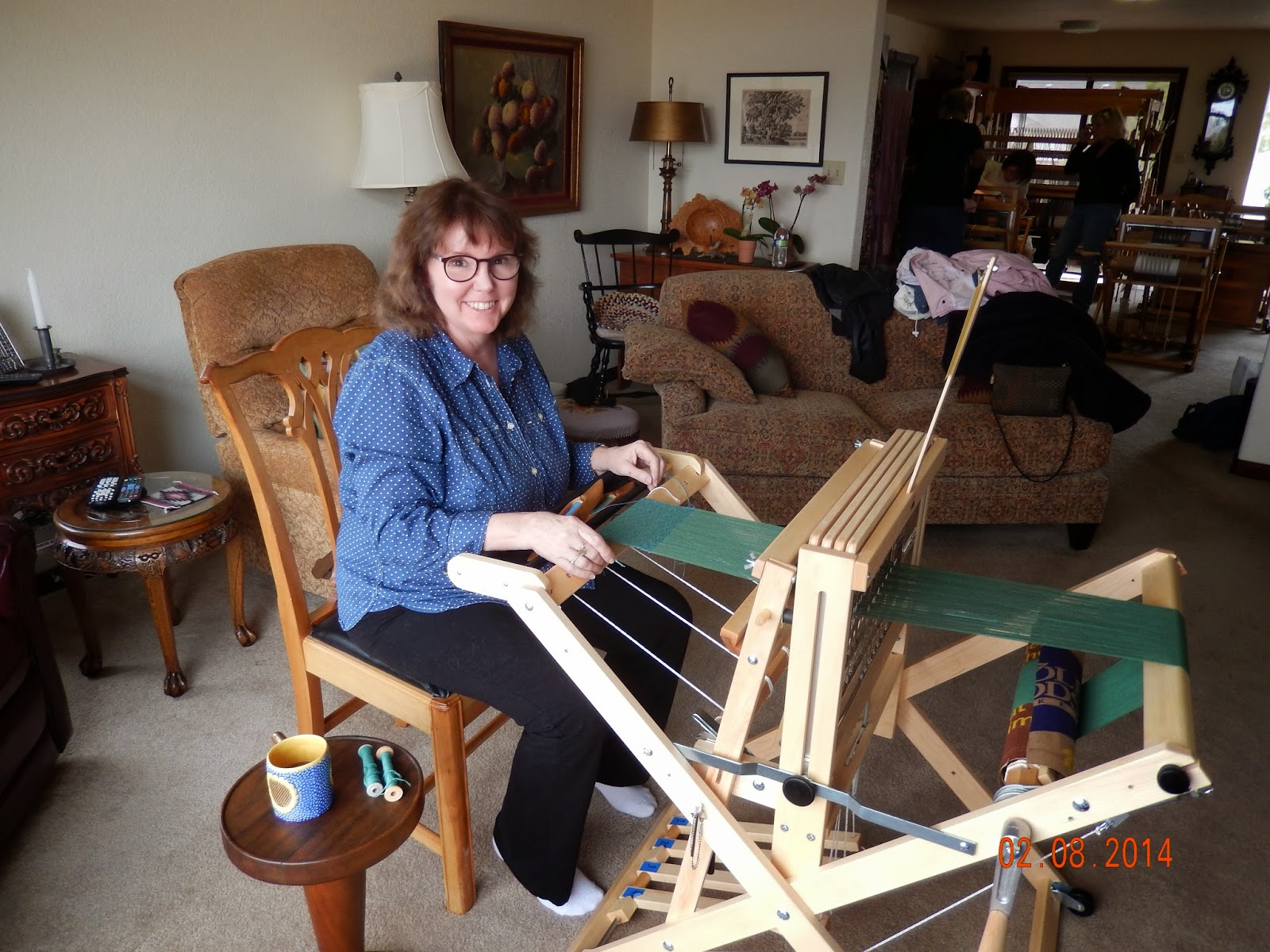 Darla's is working on the easiest pattern and also my favorite.  It's the first draft on p.131 of Anne Dixon's book and it would make a great jacket fabric.  The one thing in common with all the drafts that I understand is that like Overshot, there's always a shot of tabby after every pattern shot.  That's all I understood and given that there were about a half dozen books there written solely on the subject of Crackle Weave, I'm not going to beat myself up over it.  If you're interested in more information about Crackle Weave, there's a great blog post here. 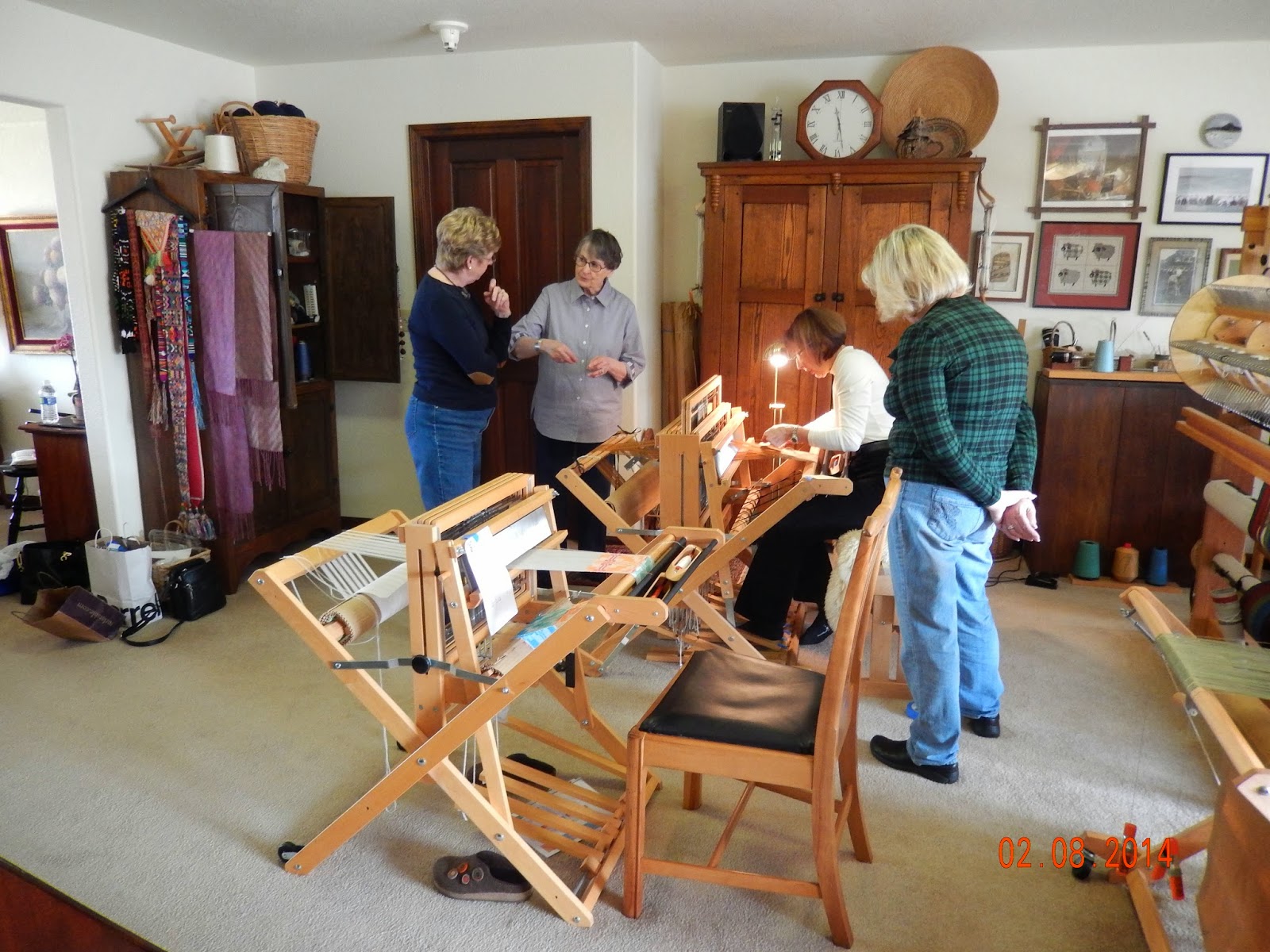 I learned so much and tried to weave as much of the five hours I was there as I could.  I had no idea that eight shafts are so much heavier to lift than four shafts, but I learned that yesterday and again this morning when I climbed out of bed with sore legs.  I'm so thankful to all the weavers in my guild who spent the time to put this together.

The only mar on the day was when I started to drive home in the pouring rain and a warning light came on my dash.  Even though we've had the car since September, I've only been driving it a month and this was a totally strange symbol.  I called the dealership and she said it indicates low tire pressure.  By the time I got there, my right rear tire was nearly flat.  I had picked up a nail.  They had it patched and ready to go in an hour and was I ever thankful for this new sensor that Subaru has implemented or I would have been alone on the side of the road with a flat time in the rain.  I'm also thankful for the rain and glad I got to enjoy it from inside the car.
Posted by Sharon at 1:50 PM

Our VW Jetta has that sensor, too; pretty cool. And that scarf you wove – SO PRETTY! No wonder it's been snatched up already!

Your scarf is beautiful !!!!