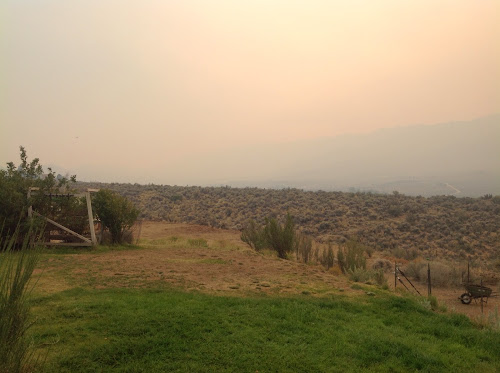 We were trapped in the house for about four days with the smoke from the King fire 100 miles to the southwest of us. During that period www.airnow.gov listed our area as the most toxic air in the US, thanks to atmospheric conditions. The arsonist has been arrested but meanwhile, the fire is only 10% contained and Desolation Wilderness, on the west side of Lake Tahoe, is threatened and closed to hikers. There are so many fires every year with the unrelenting drought that I wonder that anything is left to burn. Our air is better now but the fire is over 80,000 acres with nearly 5,000 firefighters. They've divided it into two zones, sharing air power, trying to establish a perimeter. 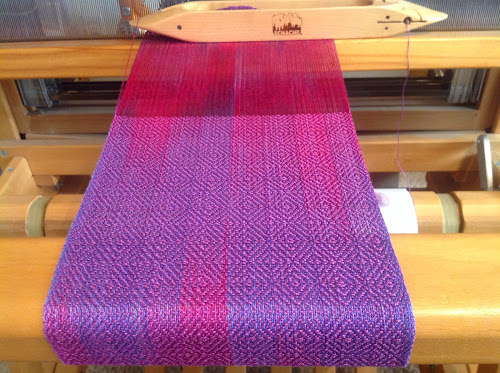 This is my second painted warp and instead of a high contrast weft, I chose to monochromatic one. I talked to Laura about it, worried that the pattern would disappear. She said I should try it, that it will be subtle but could be quite elegant. 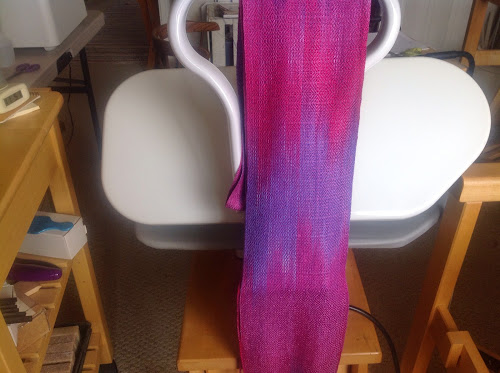 I was disappointed at first after I finished it. The weft did disappear but I realize that the warp that I worked so hard to paint is the star on this scarf. 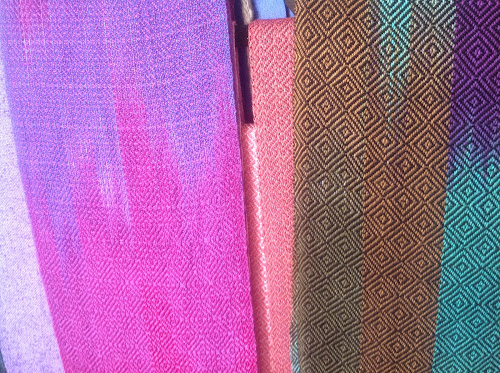 Here are both painted warp scarves from the same draft and they are very different. I got excited and went out into the garage to set up for more scarves, but it was just too smokey. I'll have to wait and boy do I hate to wait when I decide to do something. 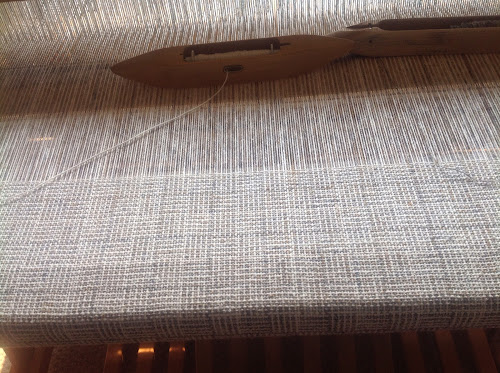 I'm weaving a couple more log cabin baby towels on my 40" loom and really not loving the two-shuttle shuffle. I realized once I got started that I didn't like it last time either but love how soft they are when they're finished. I need to buckle down and finish these to clear the loom. Why? 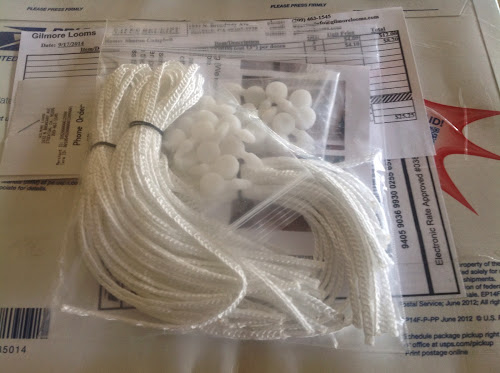 Because this just came in the mail. It's Texsolv tie-up so I can finally use the other four harnesses. I realized while weaving these last two scarves how much I limit myself on drafts with only four harnesses. It's time to push myself a little more and I'm ready for the challenge. 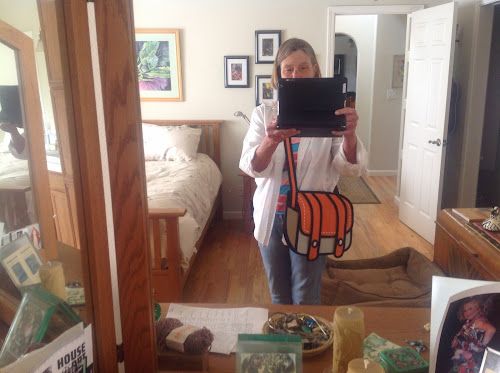 And what is this you might wonder. It's a very odd two-dimensional courier bag, just big enough for my iPad, phone, credit cards and cash. I plan to use it on the subway as it's pretty pickpocket proof. It's hard to believe but we'll be in Manhattan in just 2 1/2 weeks. We planned this trip to celebrate my recovery.
It will be a year since I broke my neck on Monday the 29th and I'm having lunch with my daughter that day. I'm not cleared by my neurosurgeon yet, have some unfinished business there. This Thursday I'm scheduled for a 45-minute MRI (groan) but we're going shopping at Macy's after for trip clothes. I see my doctor on the 30th and we'll talk about further treatment options. The bad news is that the movement in my neck hasn't improved in six months; the good news is he has plans to improve that.
Just another day in paradise? That's the motto of our property owners association: Rancho Haven - just another day in paradise :)

Posted with Blogsy
Posted by Sharon at 9:57 AM

Your second scarf is lovely!

My dad built me a spinning wheel last year, and once I get that mastered, I'm moving on to weaving. What beautiful scarves!

You do such beautiful work!

Agree with the comment above... I think it's wise to let the painted warp take center stage.

I have a sign in my living room on the wall....that says Just another day in paradise!!
Is your doctor in NY?

I will never have the movement in my neck.....I just want to get rid of the headache!