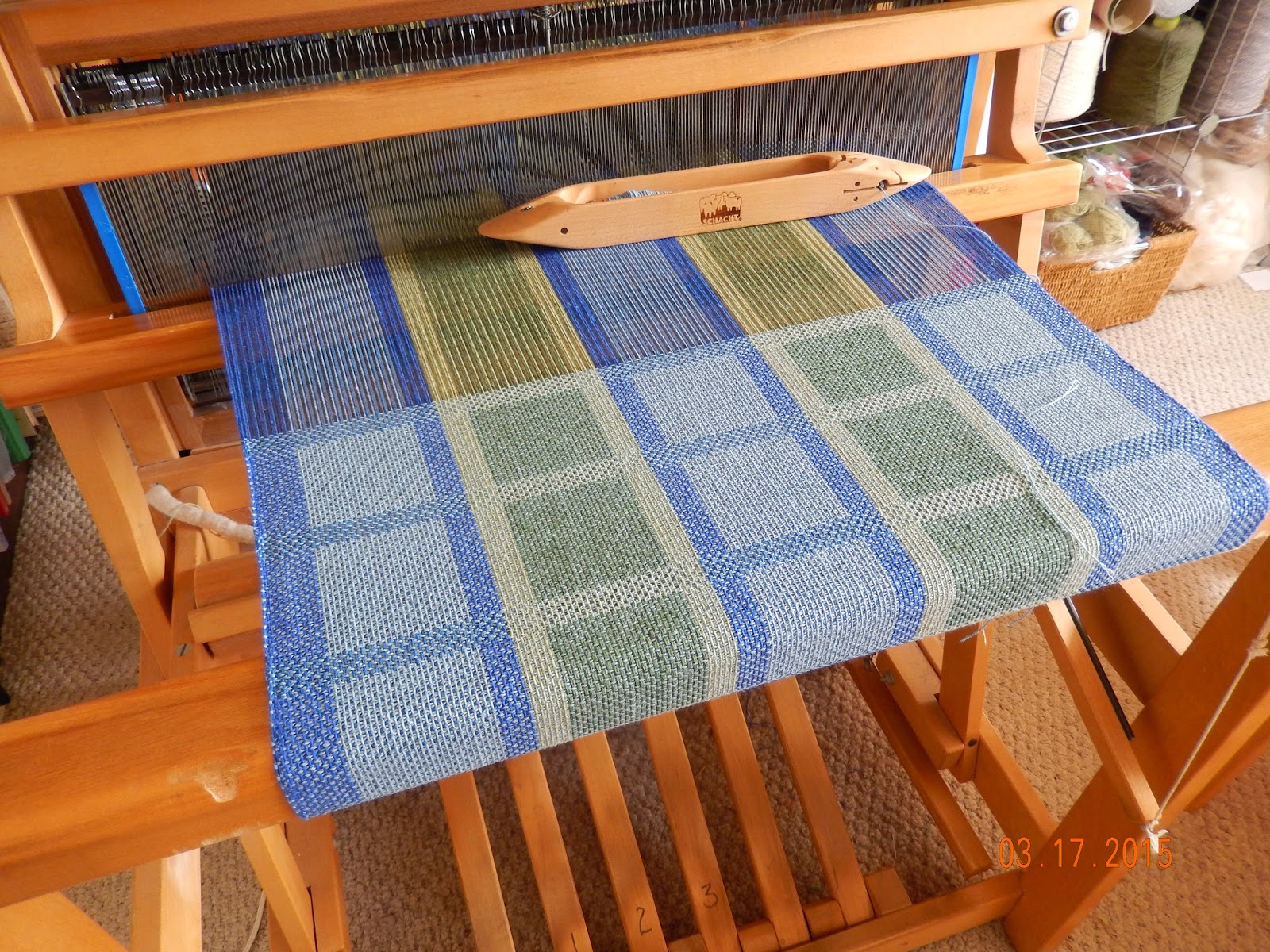 I am following the instructions from the Iowa Weaver's blog.  She gives directions for both a single shuttle and for two shuttles.  I'm pleased with the window pane effect I'm getting from a single shuttle but this is a 4-yard sampler and I'm planning to try four things. 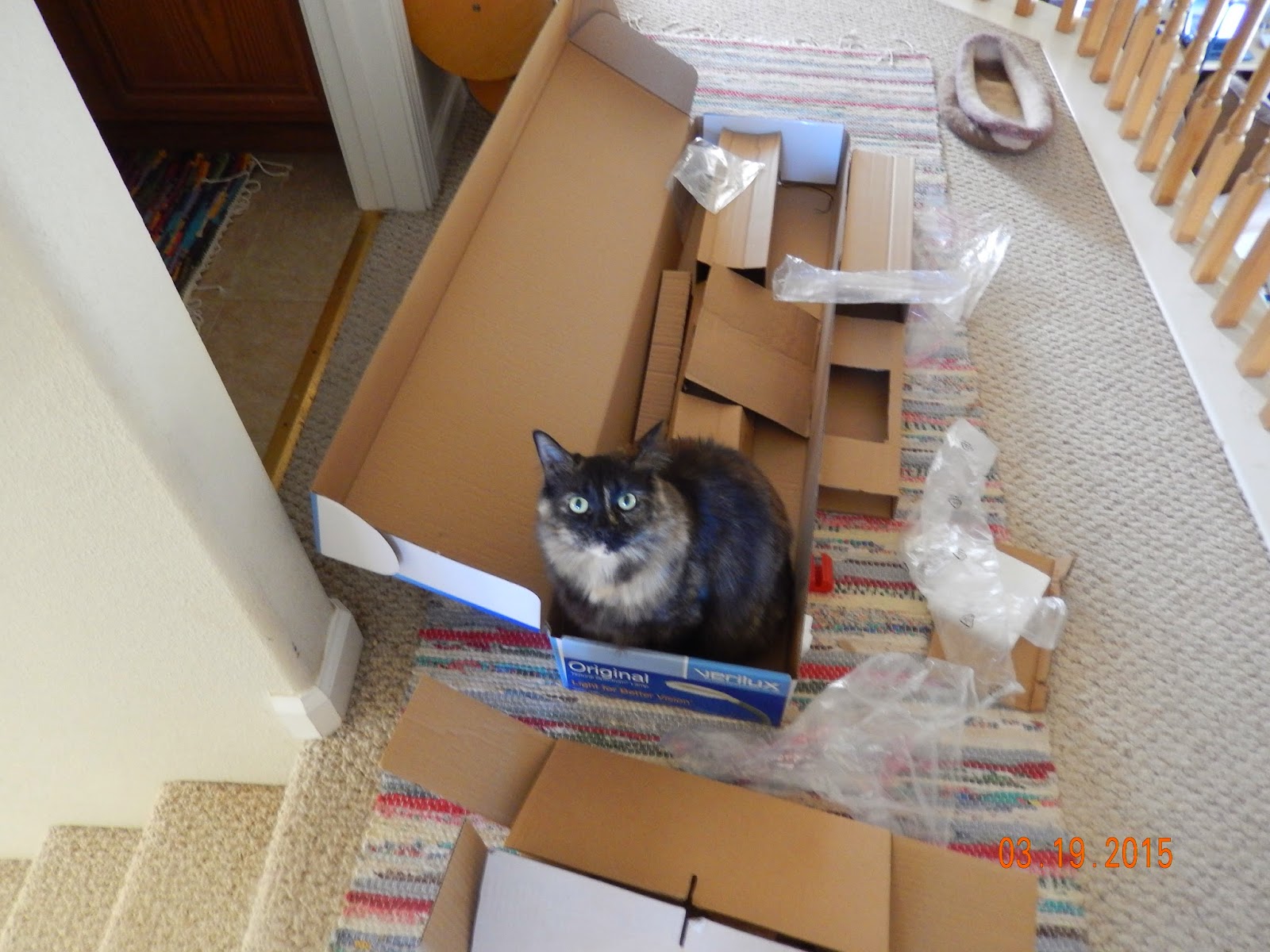 I told Melissa that I just can't see two weave on Maudie Mae when it's cloudy and she said - why don't you order an Ott light?  So I ordered one from Amazon that came two days later, free shipping.  Maddie didn't care about the light but loved the box. 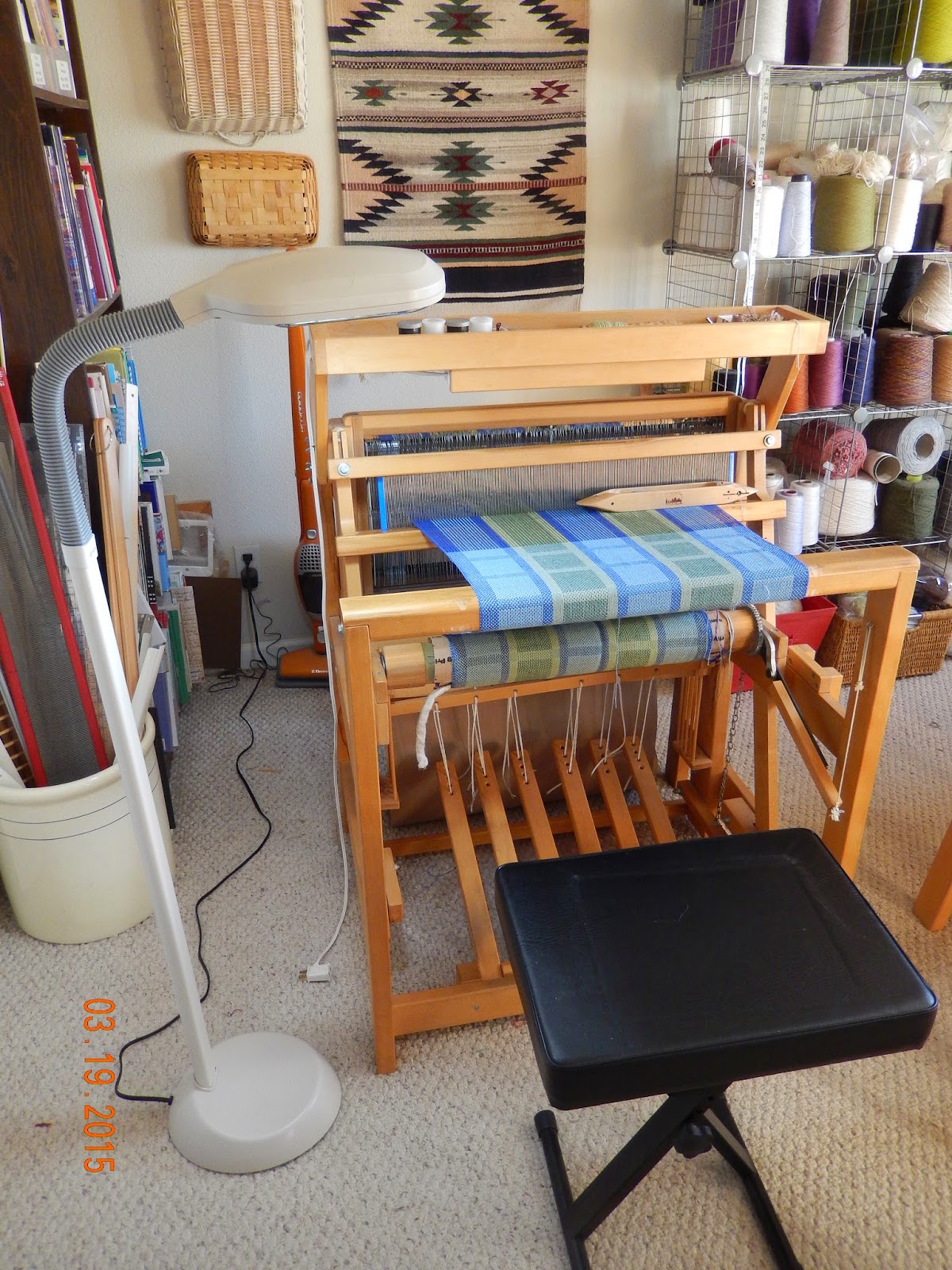 The light is made by Verilux and I chose the one with the most high ratings.  The gooseneck feature is fantastic.  I get light where I need it but the base sets the stand aside so I don't run into it with my shuttle.  I've needed this for years and I'm glad to have it now. 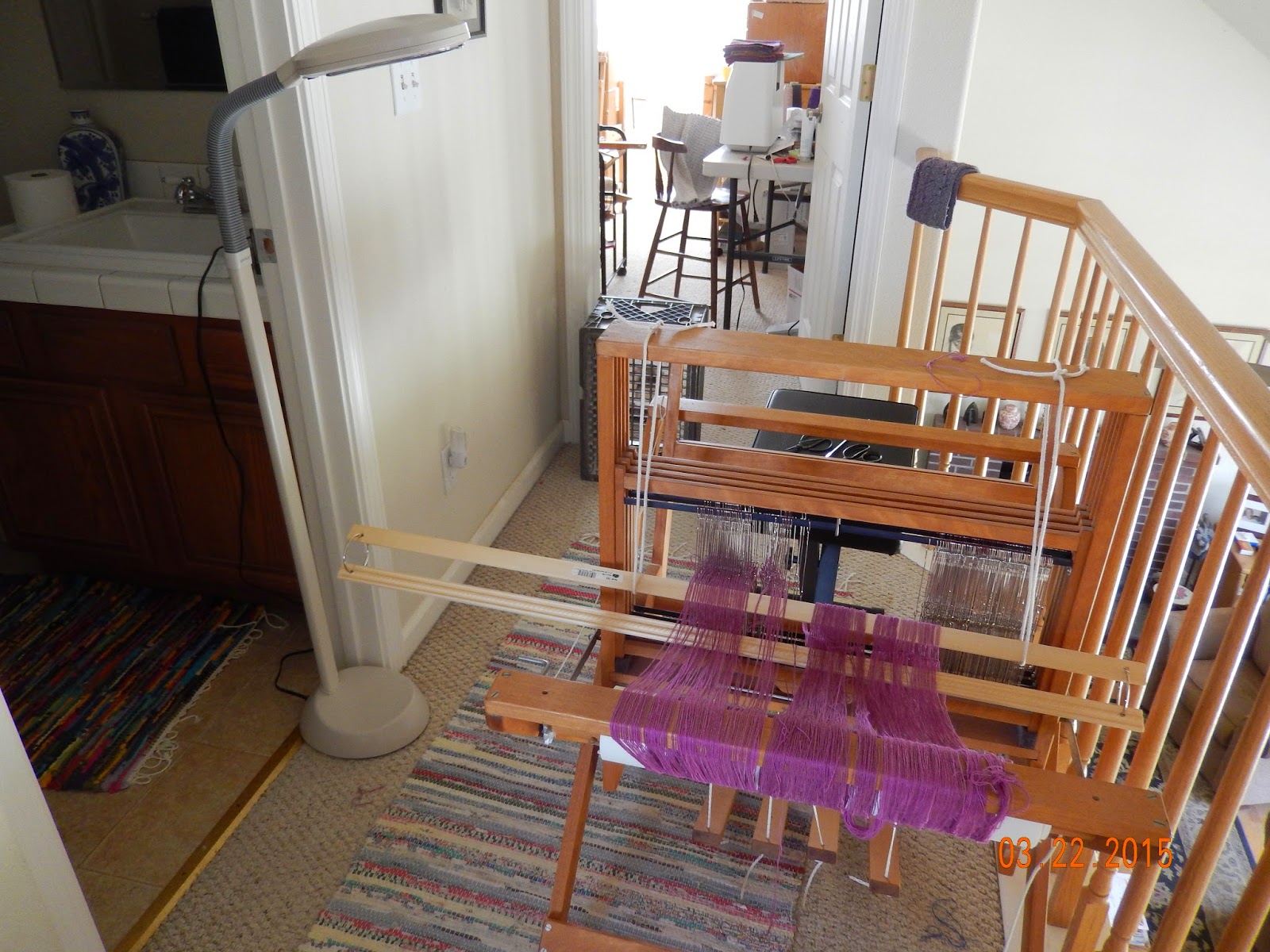 And it's allowing me to warp my studio loom on the poorly lighted balcony for our weaving outreach this Saturday.  I reread Chandler's instructions on warping from the back and was very careful to follow every step.  I learned from last year that it's an uncomfortable reach to thread the heddles from the back.  This is going pretty well and having great light is a deal maker. 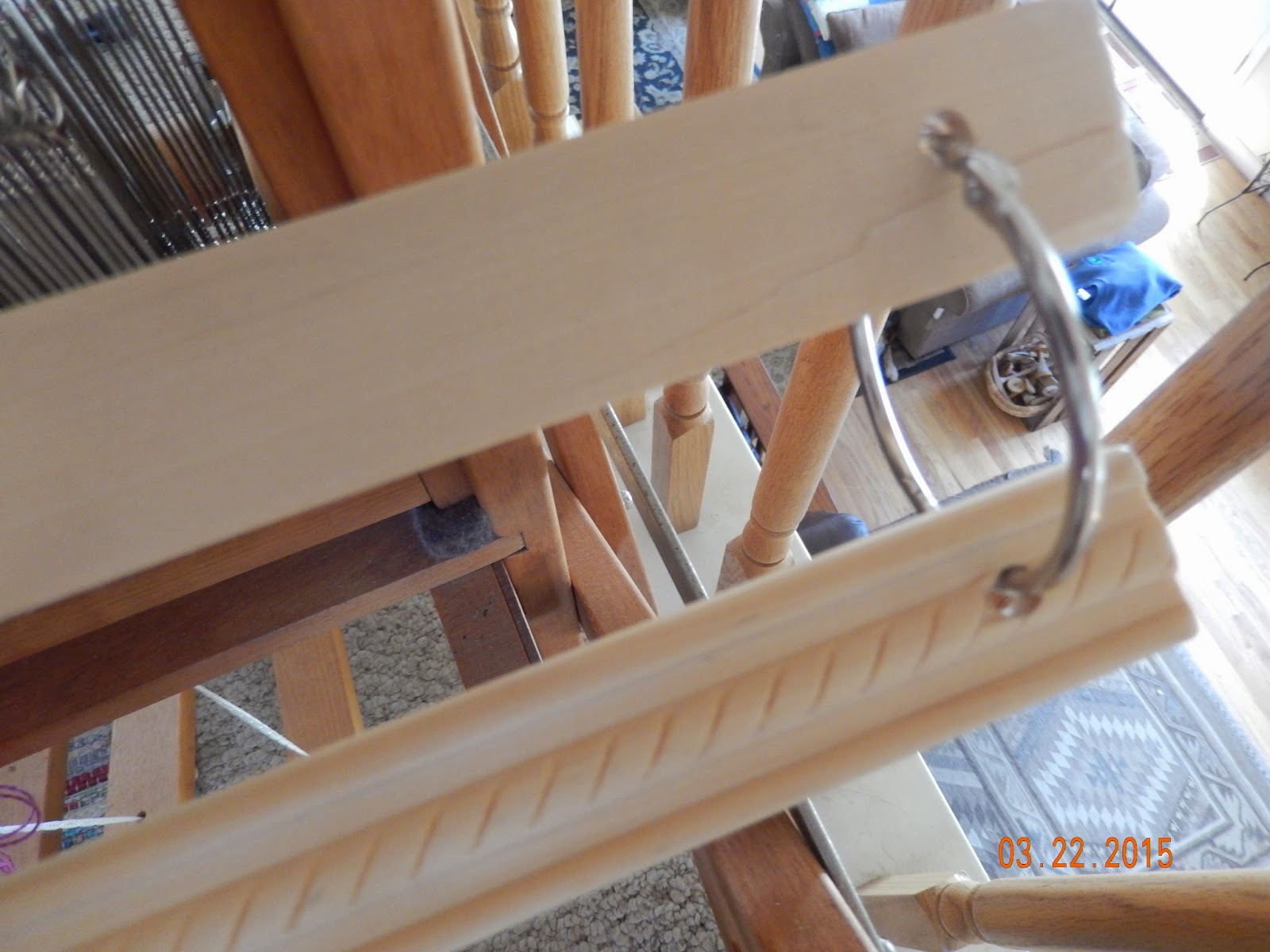 Because I ordinarily warp from the front holding the cross in my hand, I don't use lease sticks.  But after watching Tom Kniseley's DVD I know I'm going to and so I bought two of these rings that he recommended to hold them together.  What a great tip.  It's literally a snap. 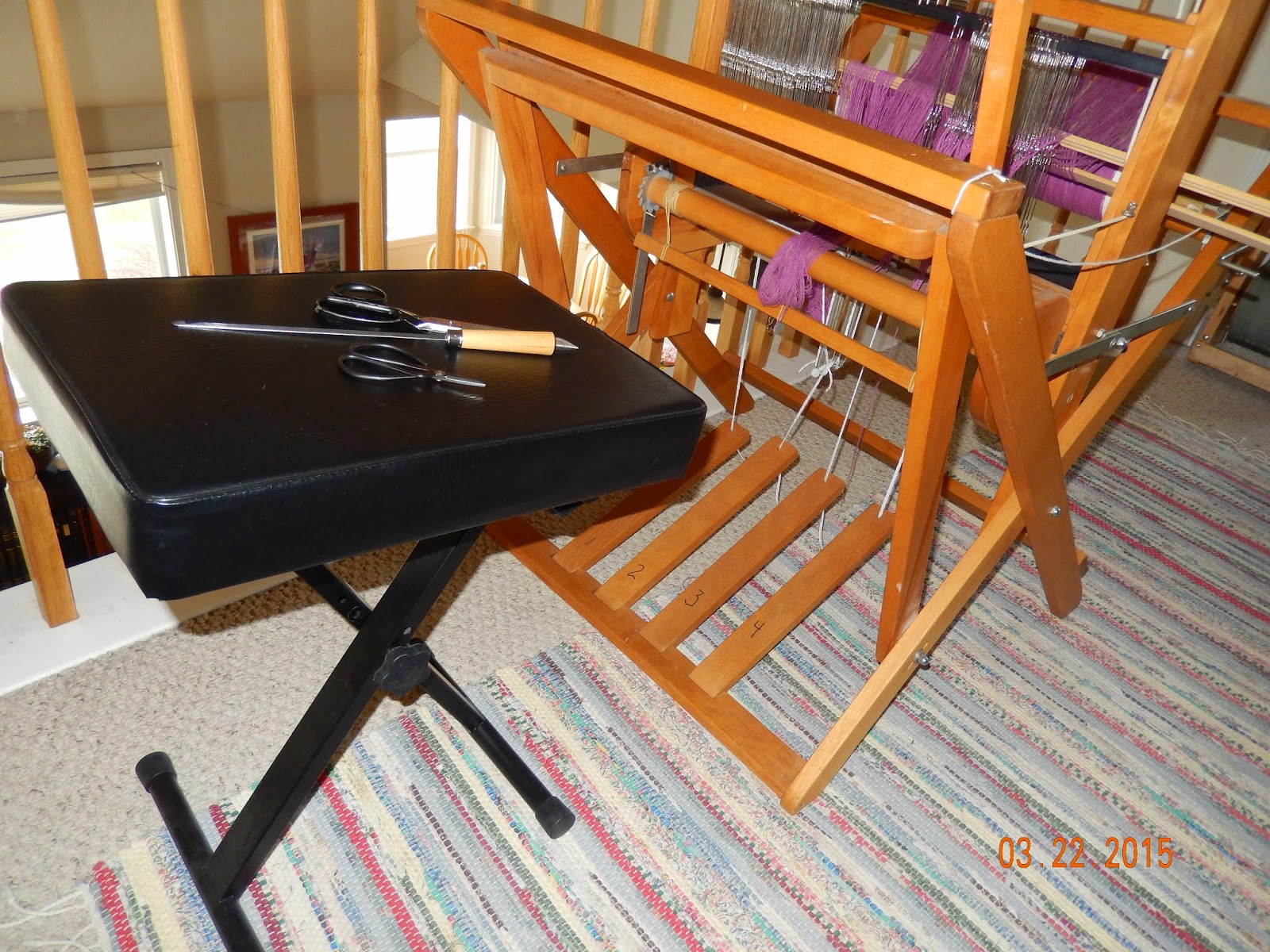 And because my Dorset is shorter, I started to lower my piano stool.  After lowering one side I realized that I had inadvertently turned it into a weaving stool, higher in the back and lower in the front.  I removed the reed and am pleased with how much easier it to is thread the heddles from the front.  I'd heard that some looms decide for themselves if they will be warped from the front or back, and this is one that decided it must be warped from the back. 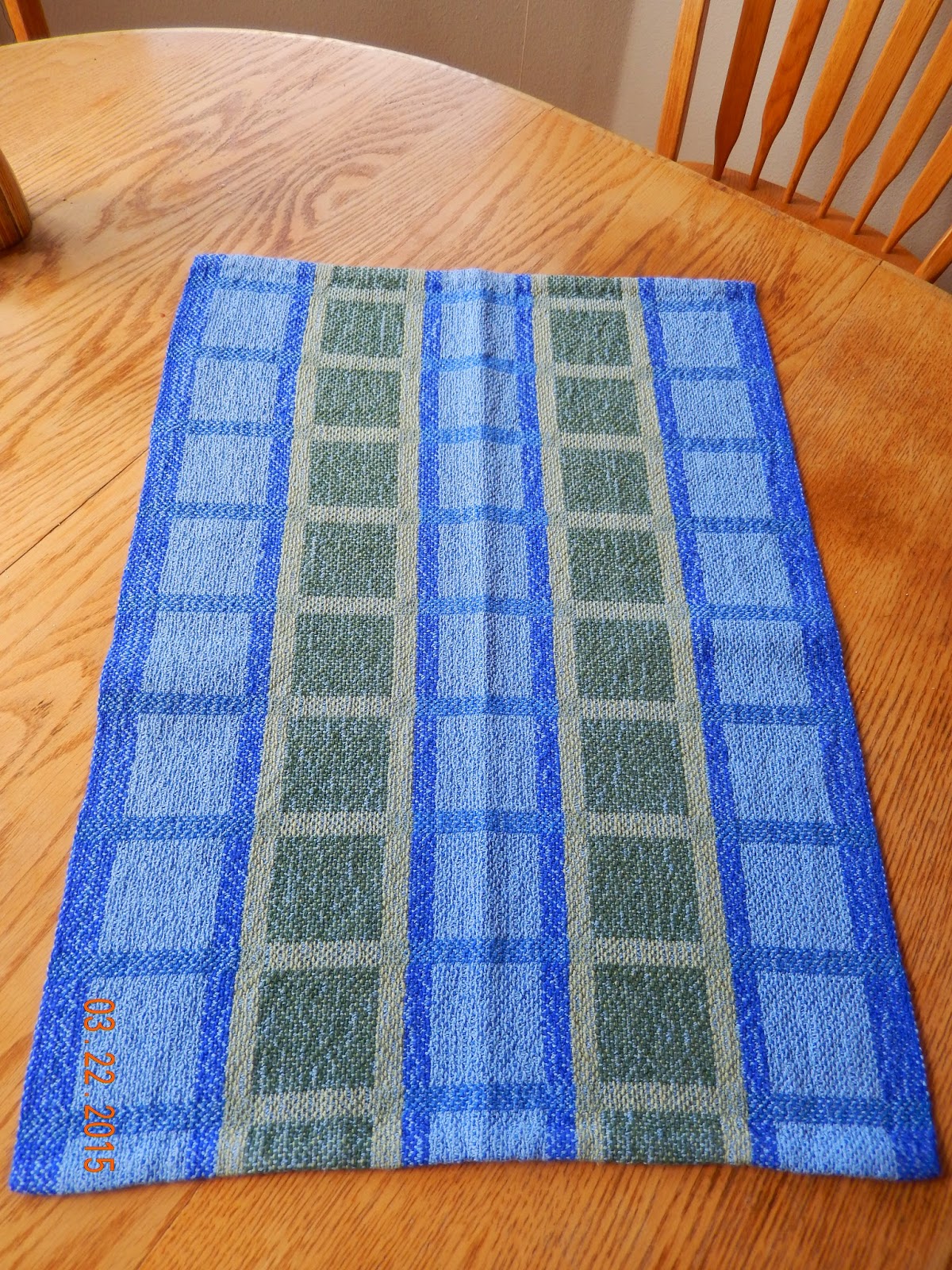 When they're flat and open, I think they look fantastic. 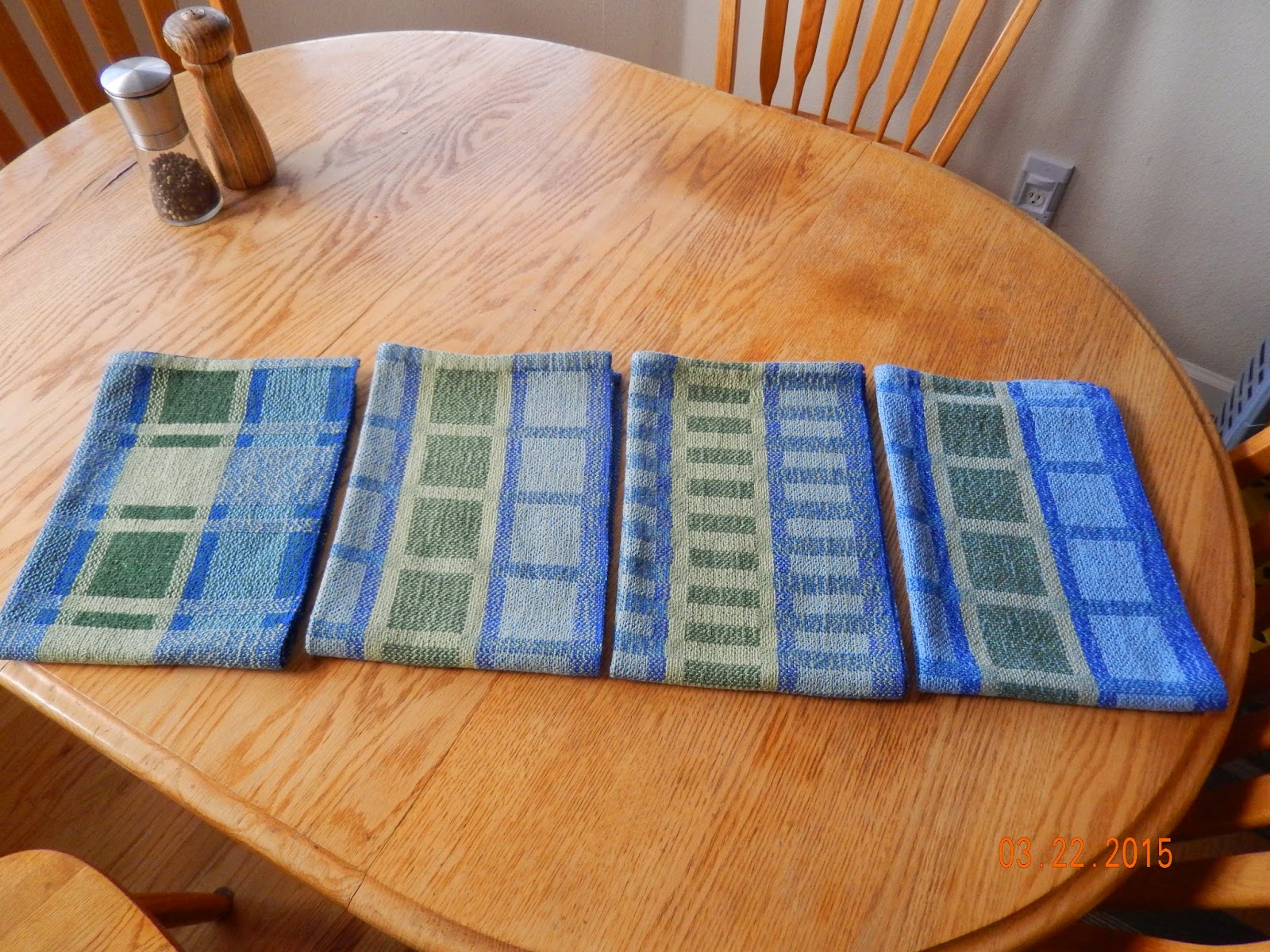 But I fold my towels in half in the kitchen, and when I do that, the pattern gets lost.  I'll go back to six blocks instead of five.  The towel on the left is the one two shuttles and my least favorite, which is good news to me since it was tedious and fiddly.

I have a 7" two-yard warp on Maudie Mae right now set at 30 ends per inch.  I want to settle for myself whether that's the preferable sett as Marg Coe steadfastly maintains.  I hope not since it would take a lot more yarn and require me to raise the price of my towels.  I'm anxious to have this resolved but can't until I get the studio loom warped and ready to go.  It's getting a four-yard warp because after the outreach, it will be used by a student in our guild's learn-to-weave workshop.  We warp looms for the students so their first experience is weaving.  The following workshop session is teaching them to warp a loom for themselves.  That way we set the hook before they have to roll up their sleeves and go to work.
Posted by Sharon at 2:45 PM

The towels look great, I love the pattern! I also have extra light on my looms, it helps a lot.

I've been debating purchasing an Ott light for years. You may just have pushed me closer to the tipping point!
And your towels are great! I'd love to make some myself. Unfortunately for now, my to do list is a little too long for them to be done anytime soon. I'll have to live vicariously through you!