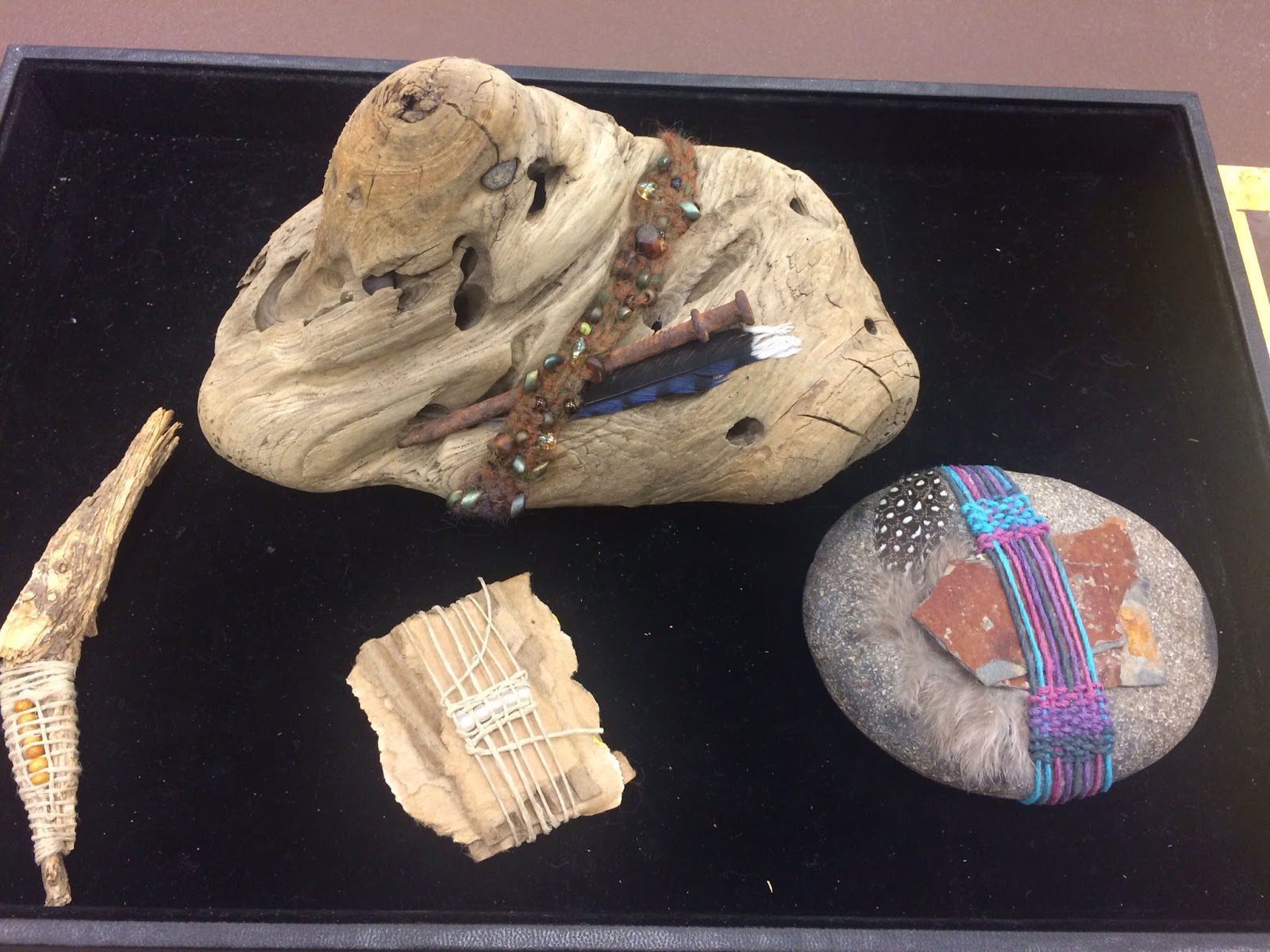 Excuse me while I blather on about how amazing our guild is becoming.  At the February meeting it was reported that we had 13 new members from last year.  The attendance at Wednesday's meeting was double any we've ever had and it was only a business meeting followed by study group reports.  Between the outreach last March and the launch of our blog last September, we are generating interest and excitement.  We have always been a weaving guild but Victoria said she doesn't want to weave but doesn't want to leave the guild either, would we consider a non-loom study group?  So in September that group launched as off-loom bead weaving and what they showed at the study group reports was jaw dropping.  Keep in mind that Karen Huntoon is a member of that group so the bar is set very high.  Victoria is a collector of found objects and this is how she incorporated them with beads.  She calls the collection Artifacts.  The bottom center artifact is simply torn cardboard, only not so simple. And that's where I see the distinction - Victoria is an artist, I am an artisan. 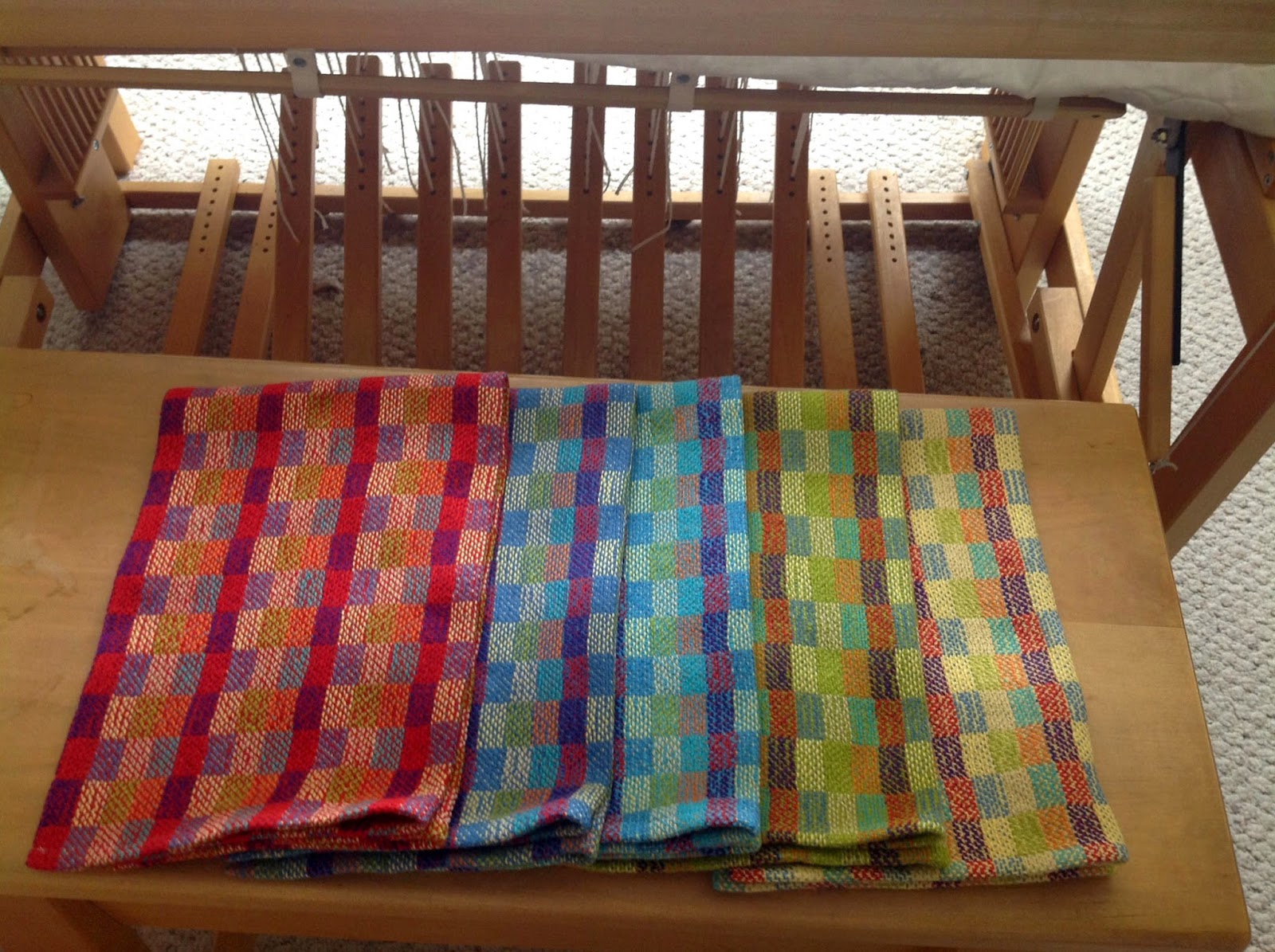 And about me - I finished my recent towels, again using colors I find in Fiesta Ware pottery, though after my wrist slap for naming them that and then listing them on Etsy, I'm going to come up with a new name.  I am thinking about closing my Etsy shop anyway.  Something about them offering an IPO and going public turns it into a business, and I'm not a business - I am a hobbyist. 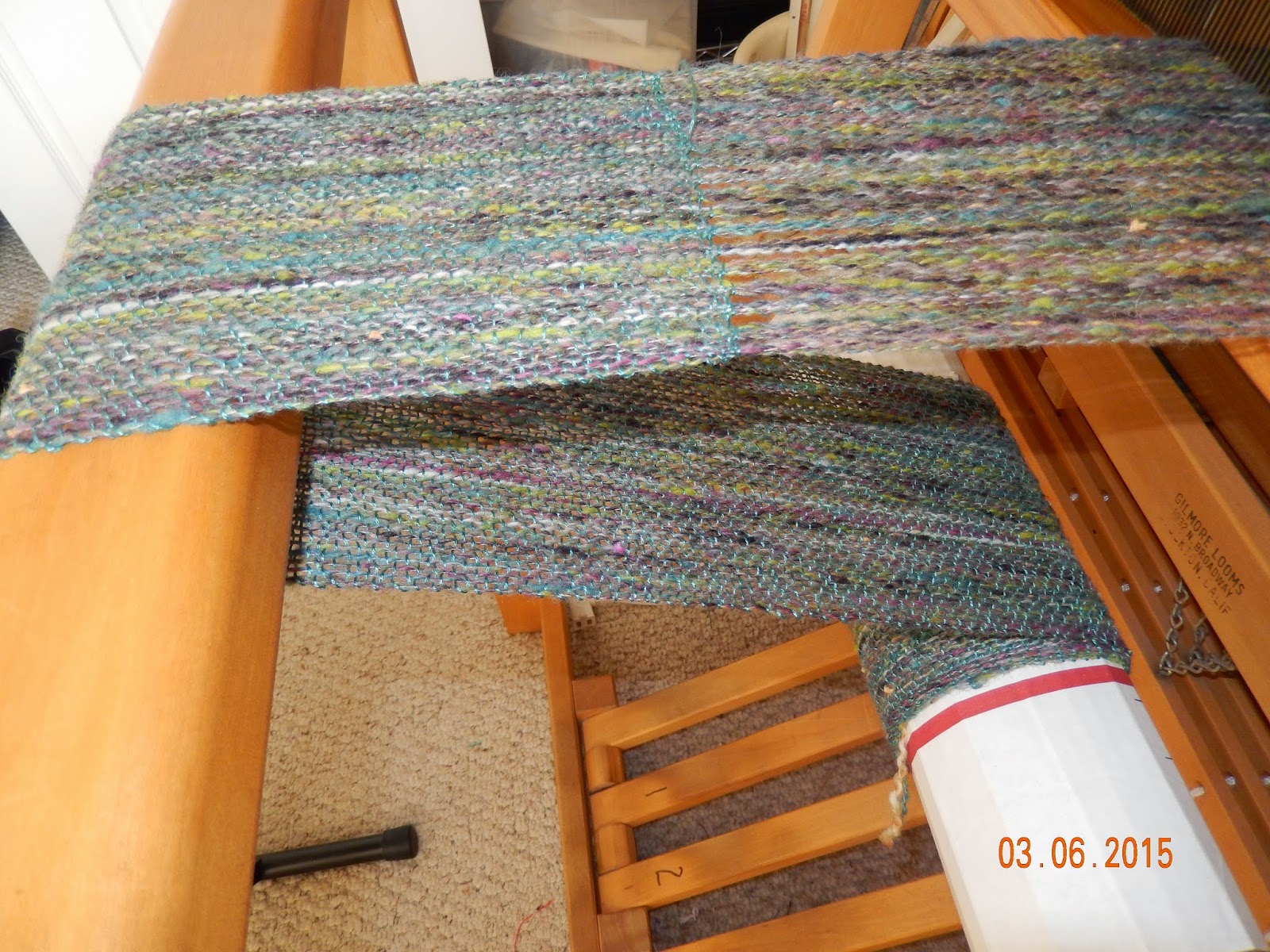 Our guild is a member of the Conference of Northern California Handweavers, CNCH, or cinch as some pronounce it.  CNCH came up with a new idea to incorporate handspinners last year called "Return to Sender" and I signed up.  I bought the packet of four hand-dyed rovings, I think it was 2 ounces of wool.  We could buy more than one packet or add 50% of our own material to supplement, which is the avenue I chose.  I started on the scarf, which weaves quickly at 8 ends per inch, after I finished the towels.  I'm waiting on a yarn order for more towels but this time I'm going to weave the blocks I have seen on Iowa Weaver's blog. 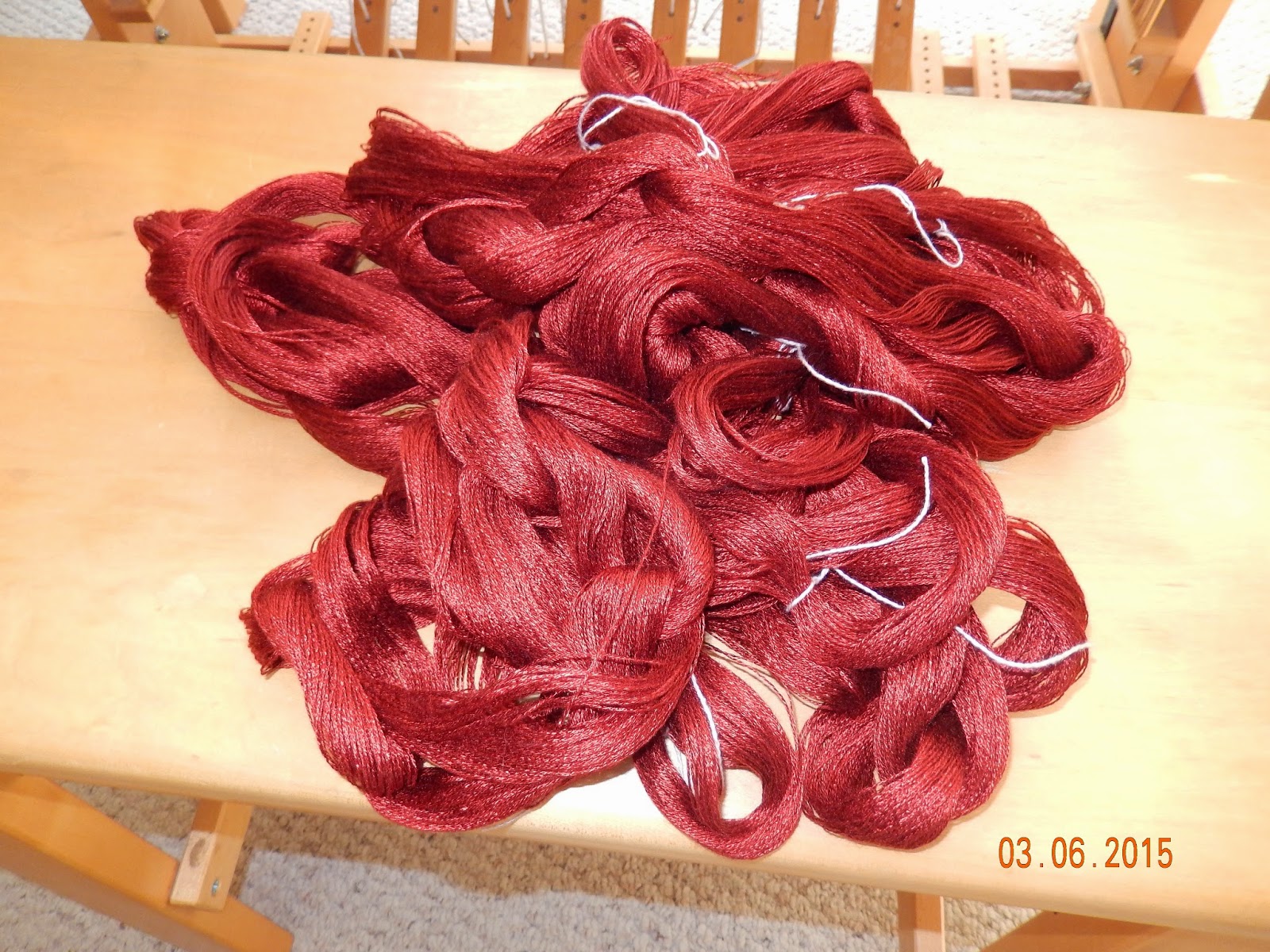 Meanwhile I've wound another warp for the 8-shaft huck lace, this time in 8/2 tencel, set at 20 epi.  Huck is an unbelievably easy pattern to thread.  I was ambitious with the last scarf at 30 epi and have decided to take a step back.  Maybe I'll try that again later, we'll see. 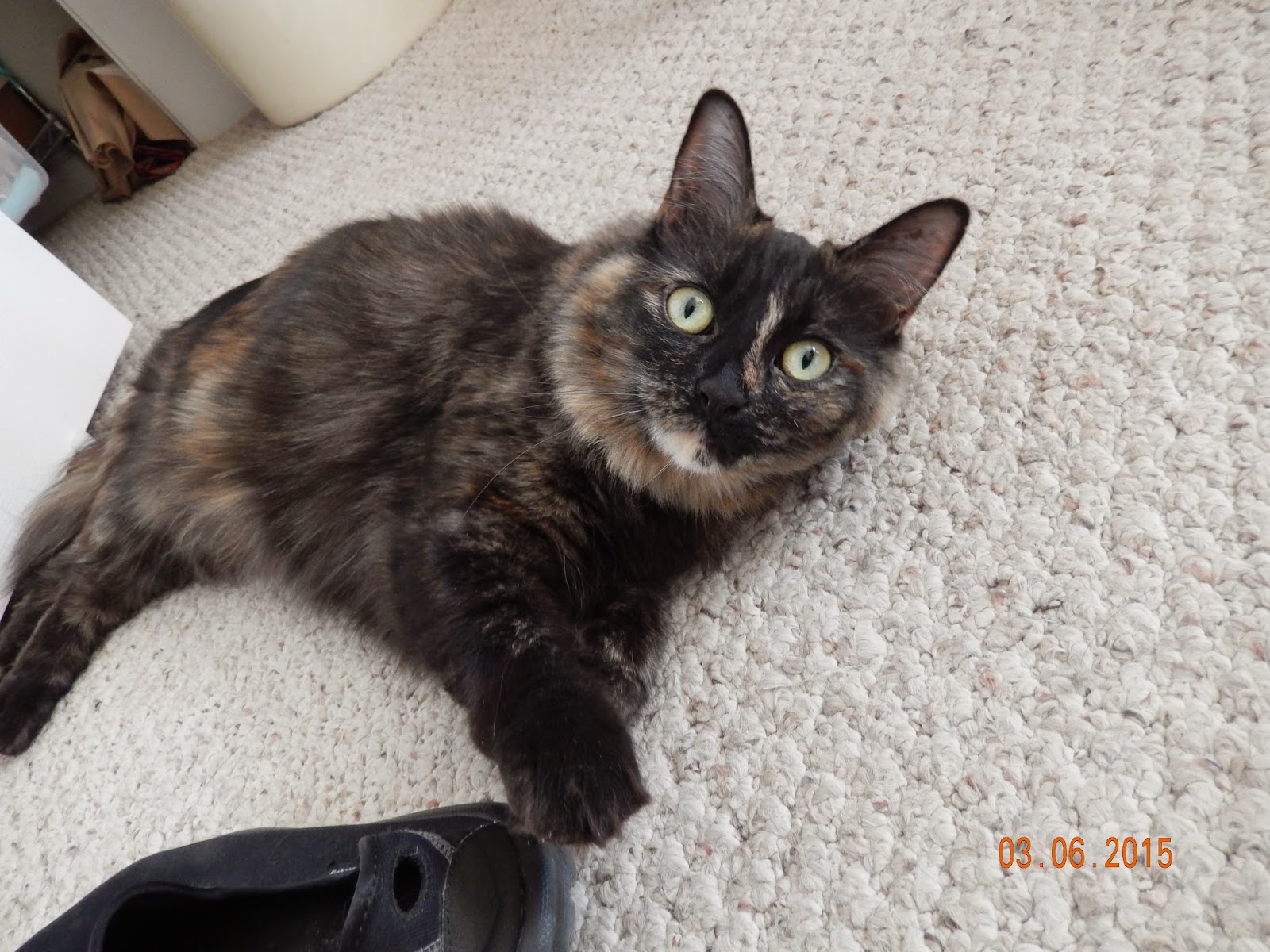 What, me naughty??  Maddie was laying on my feet while I threaded the crimson warp, but when she wouldn't stop chewing on my ankle, she got banished to the other side of the room. 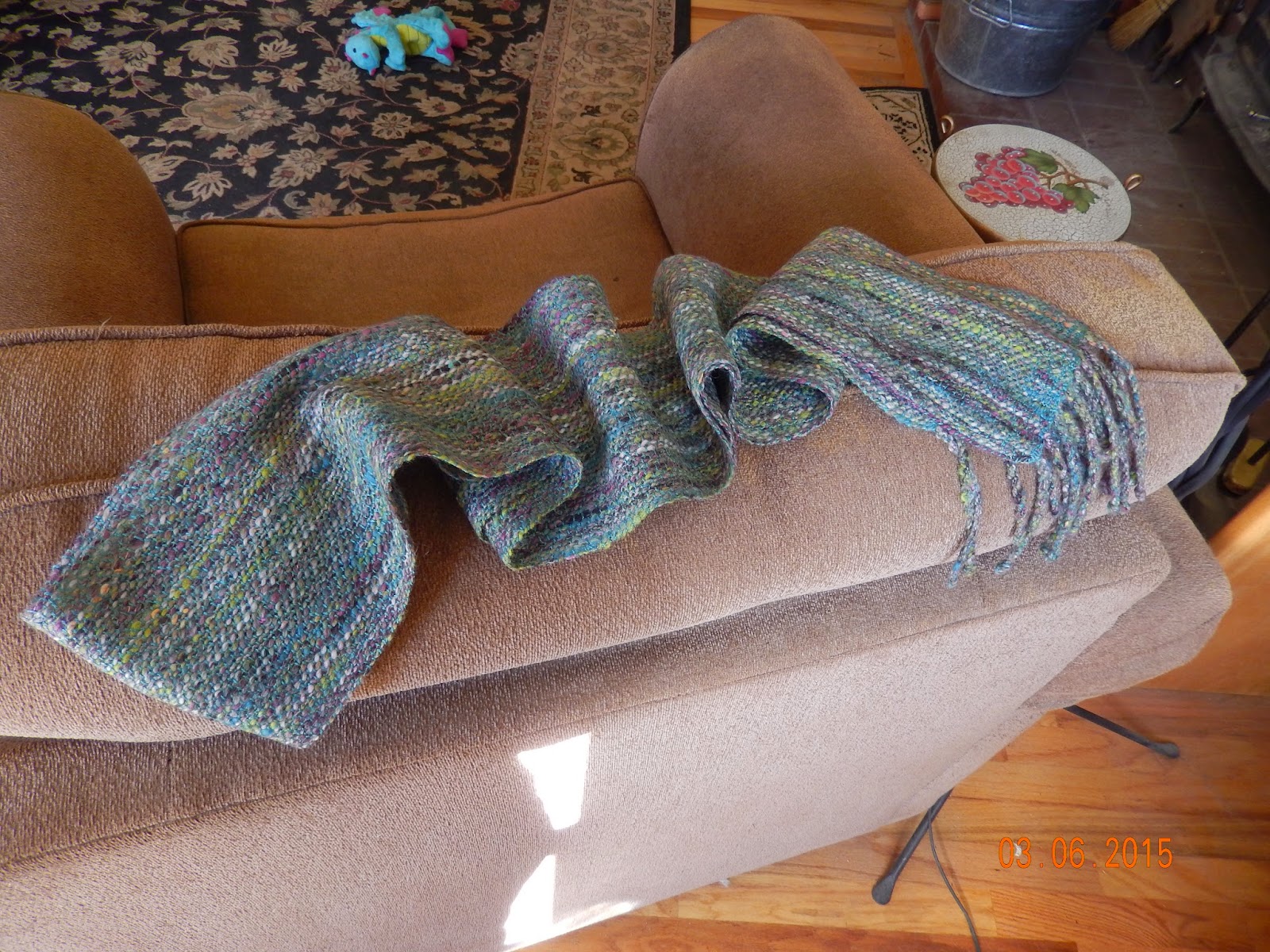 And I finished the Return to Sender scarf after lunch, ready to return to sender, i.e., CNCH. 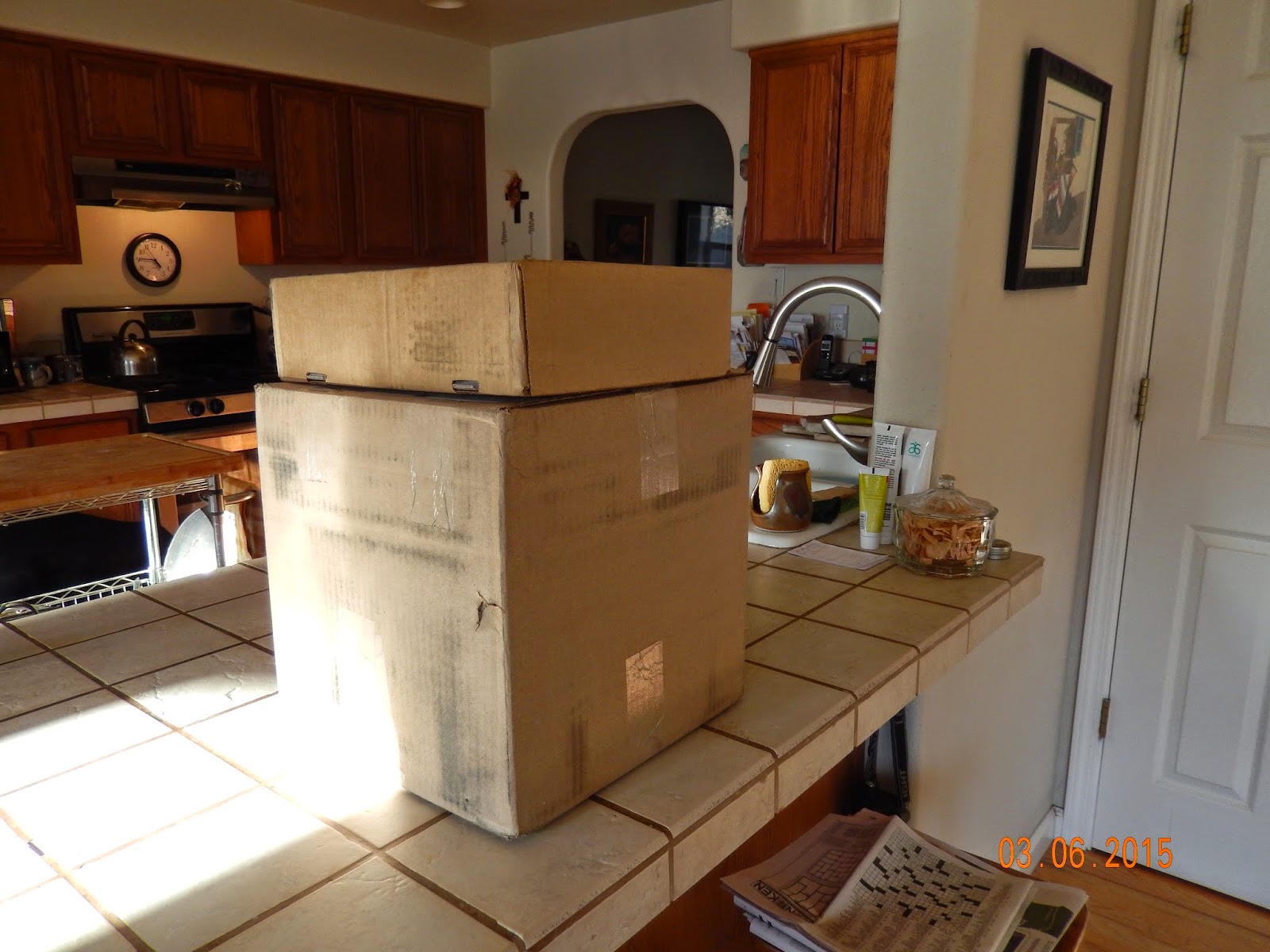 I've been waiting for the Brown truck all day and while I was typing away here, Ian saw that he had come and gone - Christmas!!!!! 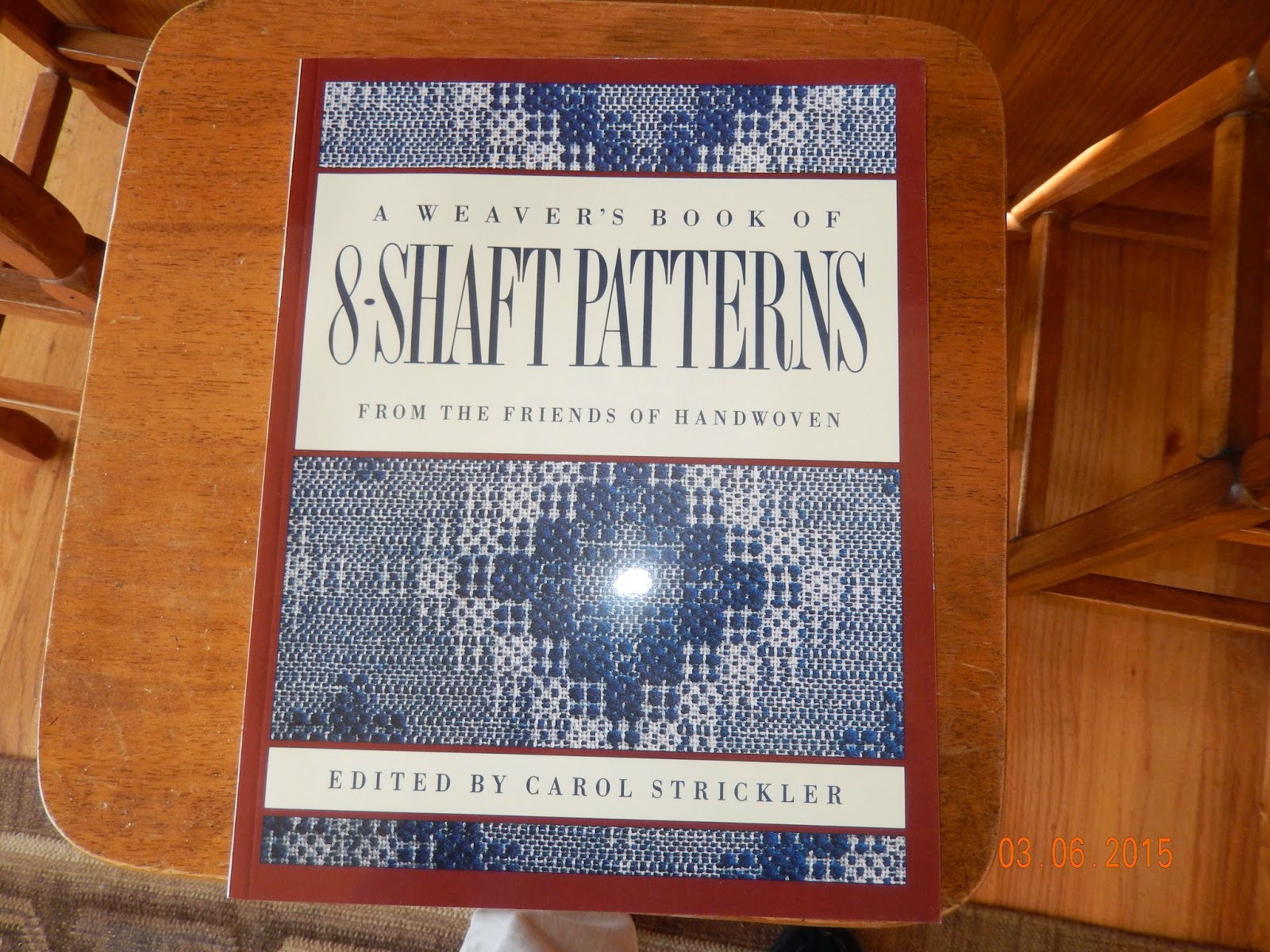 I bought this on the recommendation of Cindie Kitchens who has been a wonderful help to me as I struggle to learn this craft.  I'm excited about eight shafts but didn't want to copy patterns from Handwoven magazine.  Right now, my 8-shaft loom is all tied up.  HeHe - weaving joke :) 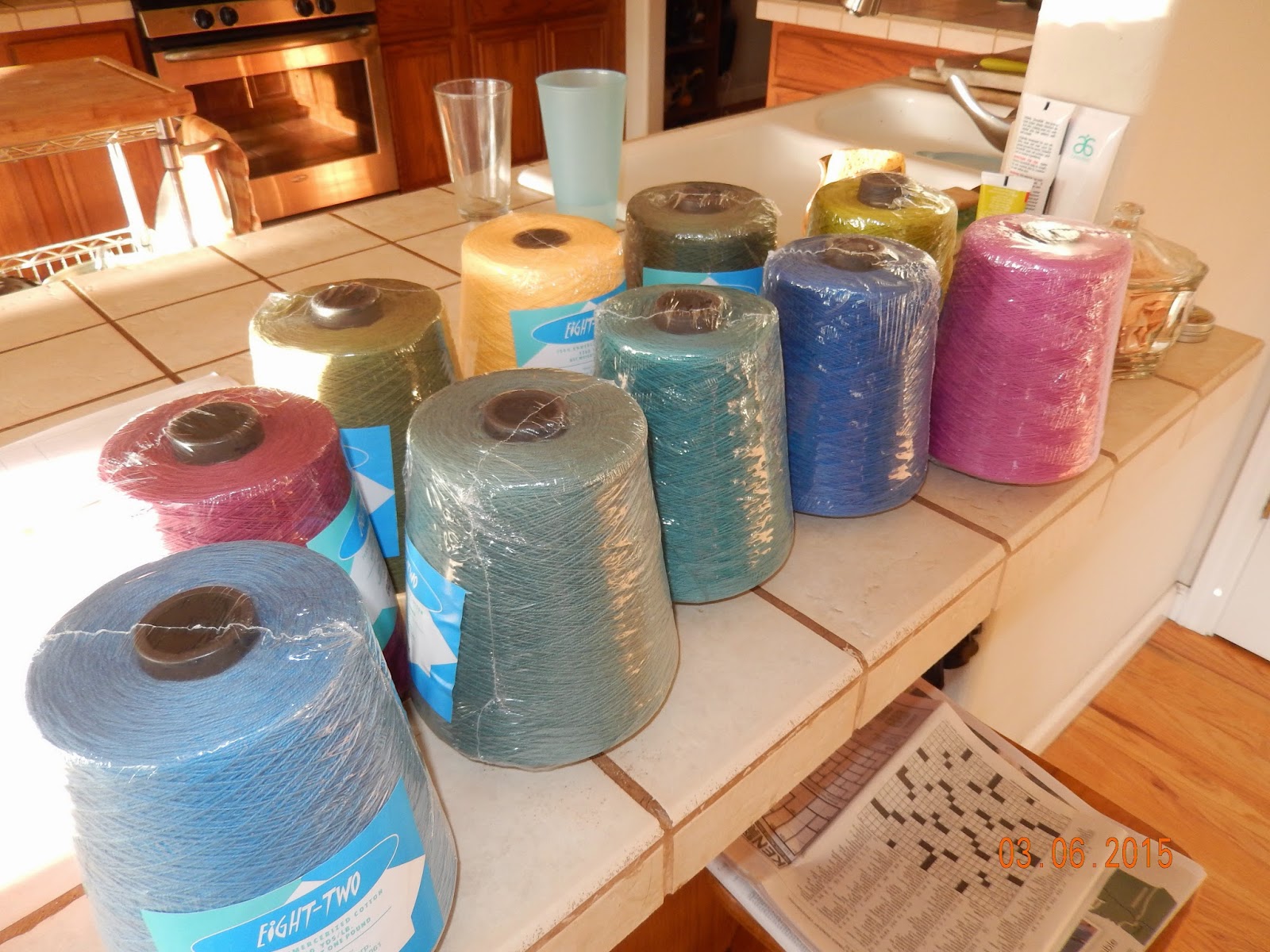 The large box held ten cones of 8/2 cotton from Webs.  I love Web's bright crisp colors though I'm questioning what I must have been thinking the day I ordered these - all the greens and blues.  I find that UKI has a warmer palette but I ordered quite a lot of it last year which might be why these cones by themselves and not in my "8/2 cotton library" seem so bright.  I wrote out a color chart for my next towels but that will have to wait until tomorrow.

What fun and imaginative things coming out of that weaving study group.

Oh my! I love those colours. They are the colours of summer. I think they will make lovely tea towels.

I keep going back to your towels. The color blends are amazing!

I love those "fiesta" towels! The colors are so cheerful. Strickler's 8-Shaft book is so much fun to daydream with. You're going to love it.