What a Nice Surprise 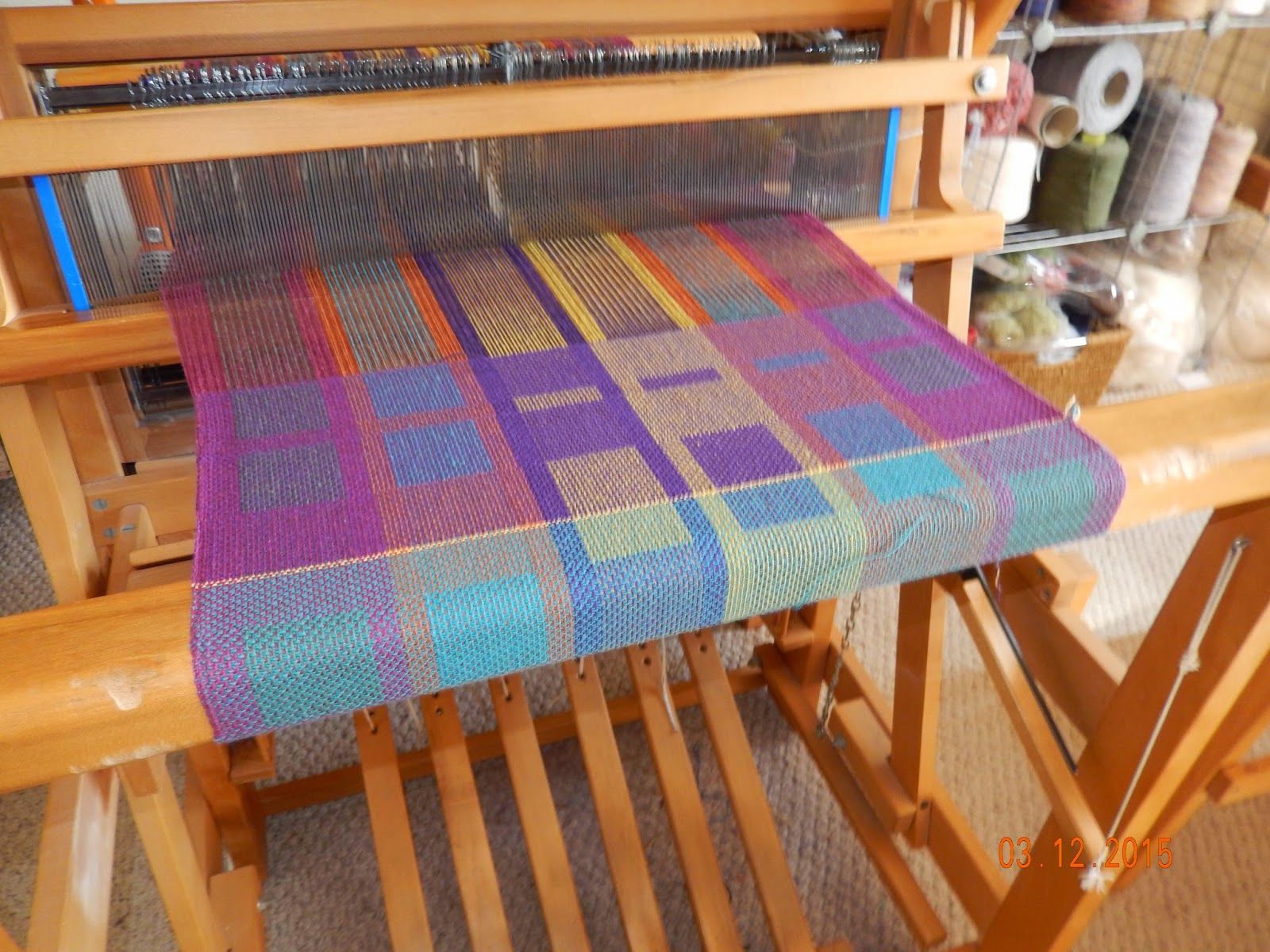 I just could not stop weaving on these and you can see why.  I was even planing the next sampler warp before I had even finished this one! 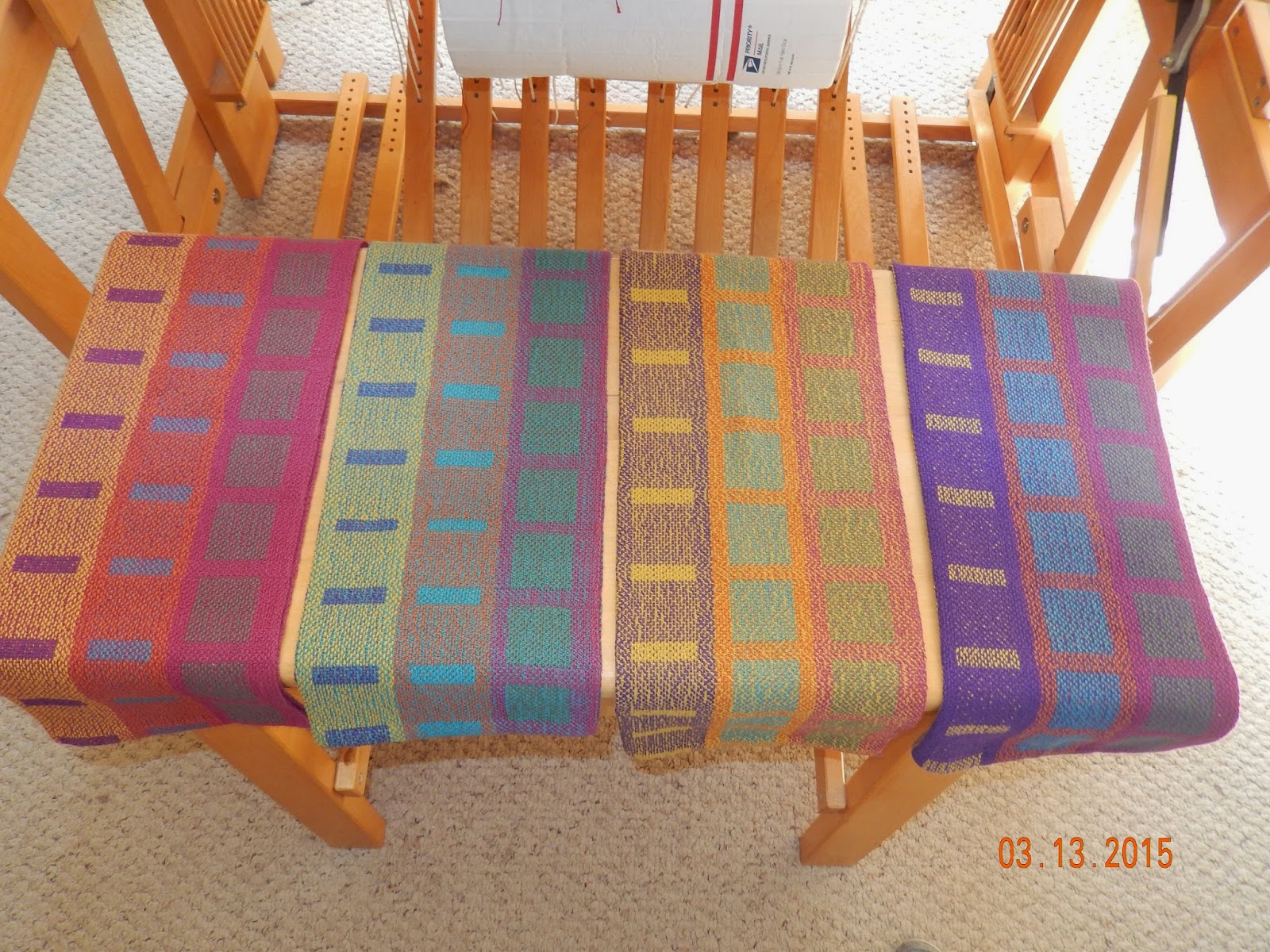 This was completely experimental, though most of the trial and error is in the warp so once it's on, the only choices left to me are weft color changes.  I love these.  I even like that the stripes and boxes aren't the same which is surprising for this Libra weaver. 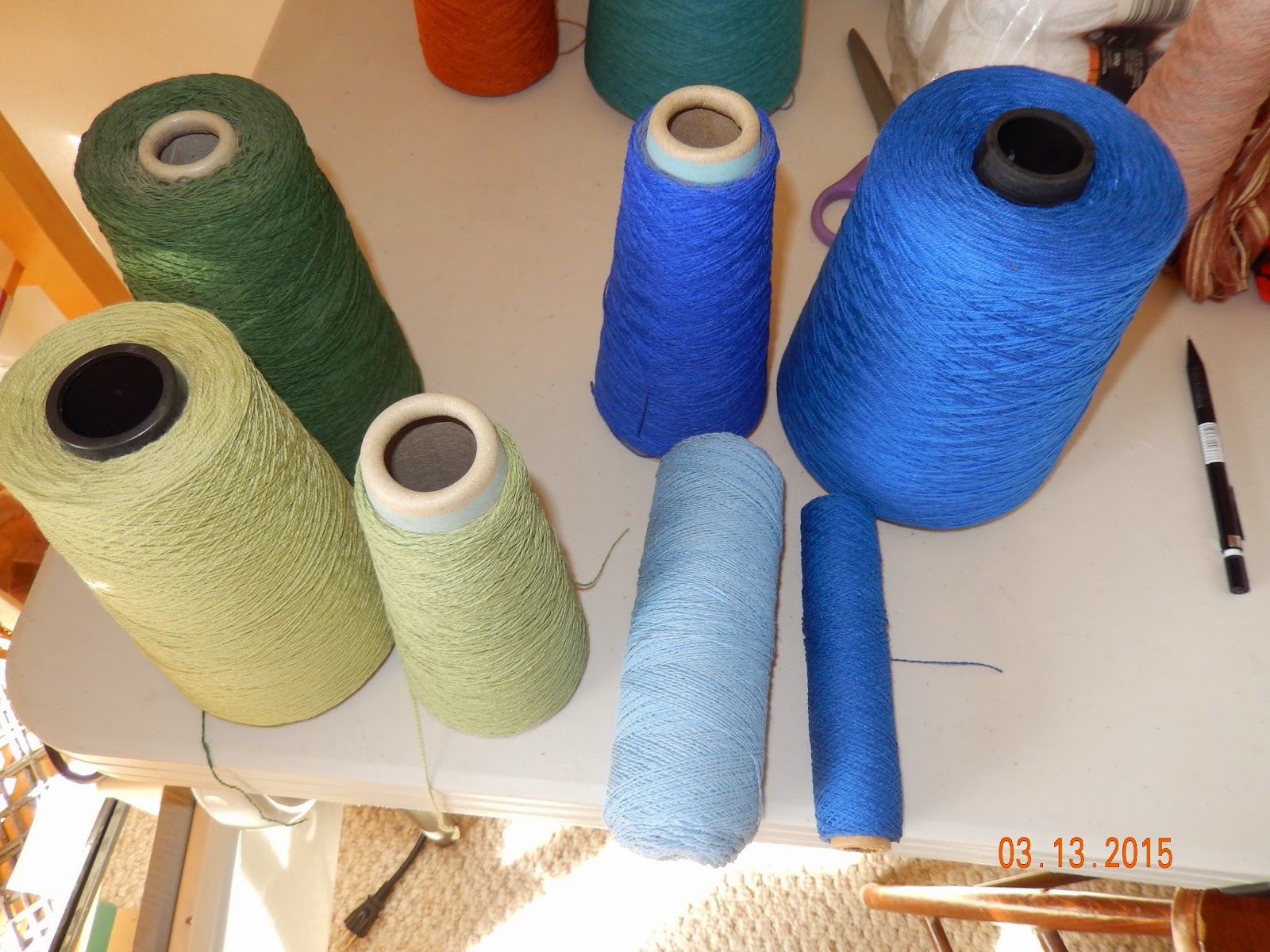 These are the next colors I've chosen.  I'm going to pair the two partial cones of greens and blues together and see if I can use them up.  More space on the shelf for me! 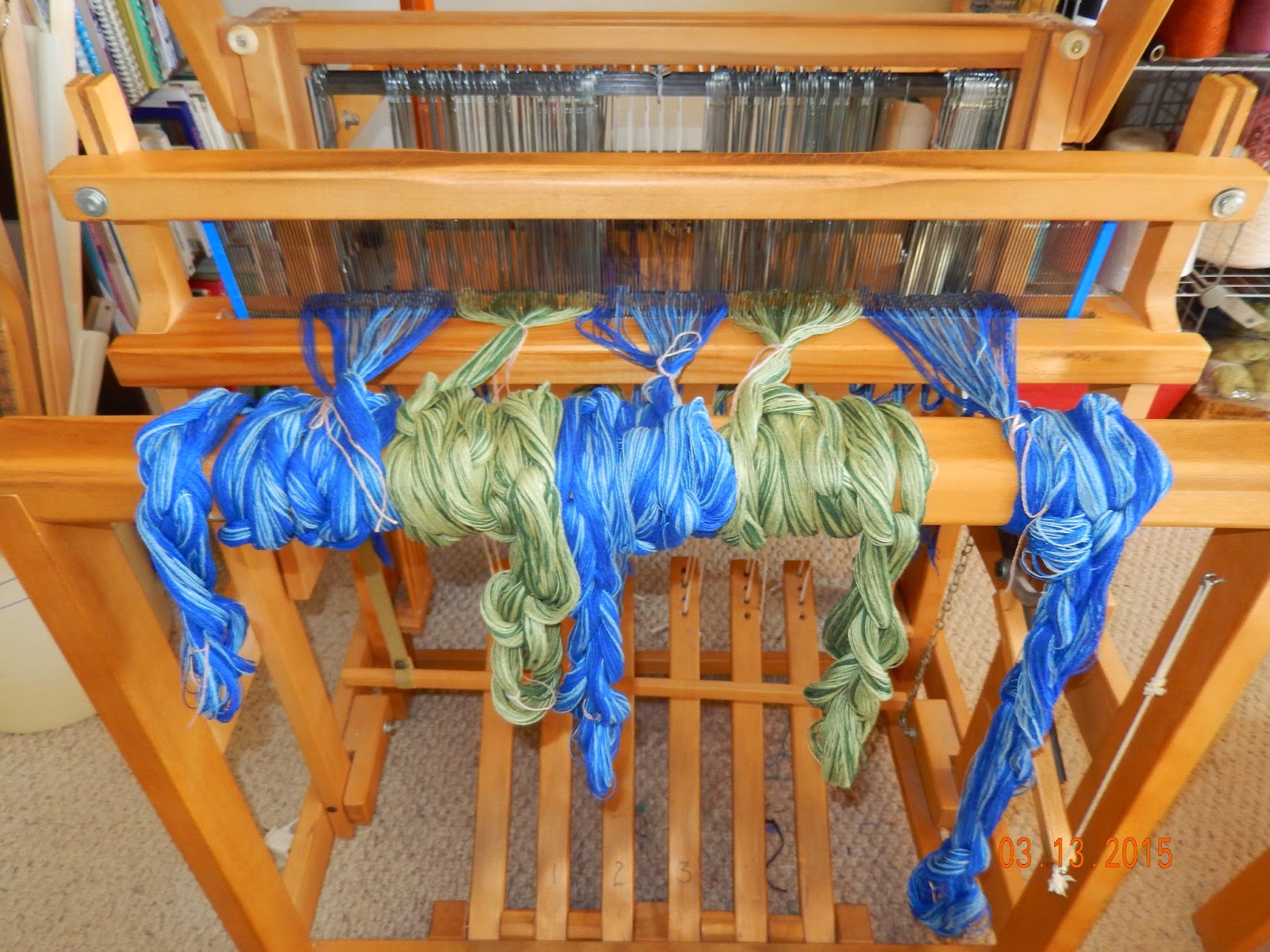 This is what it looks like so far.  I've had to stop and get my head around which harness and which treadles raise which threads.  I hope I understood it correctly and I hope it looks like what I have planned.  The colors remind me of the shag rug in my bedroom growing up.  I thought it was beautiful - then. 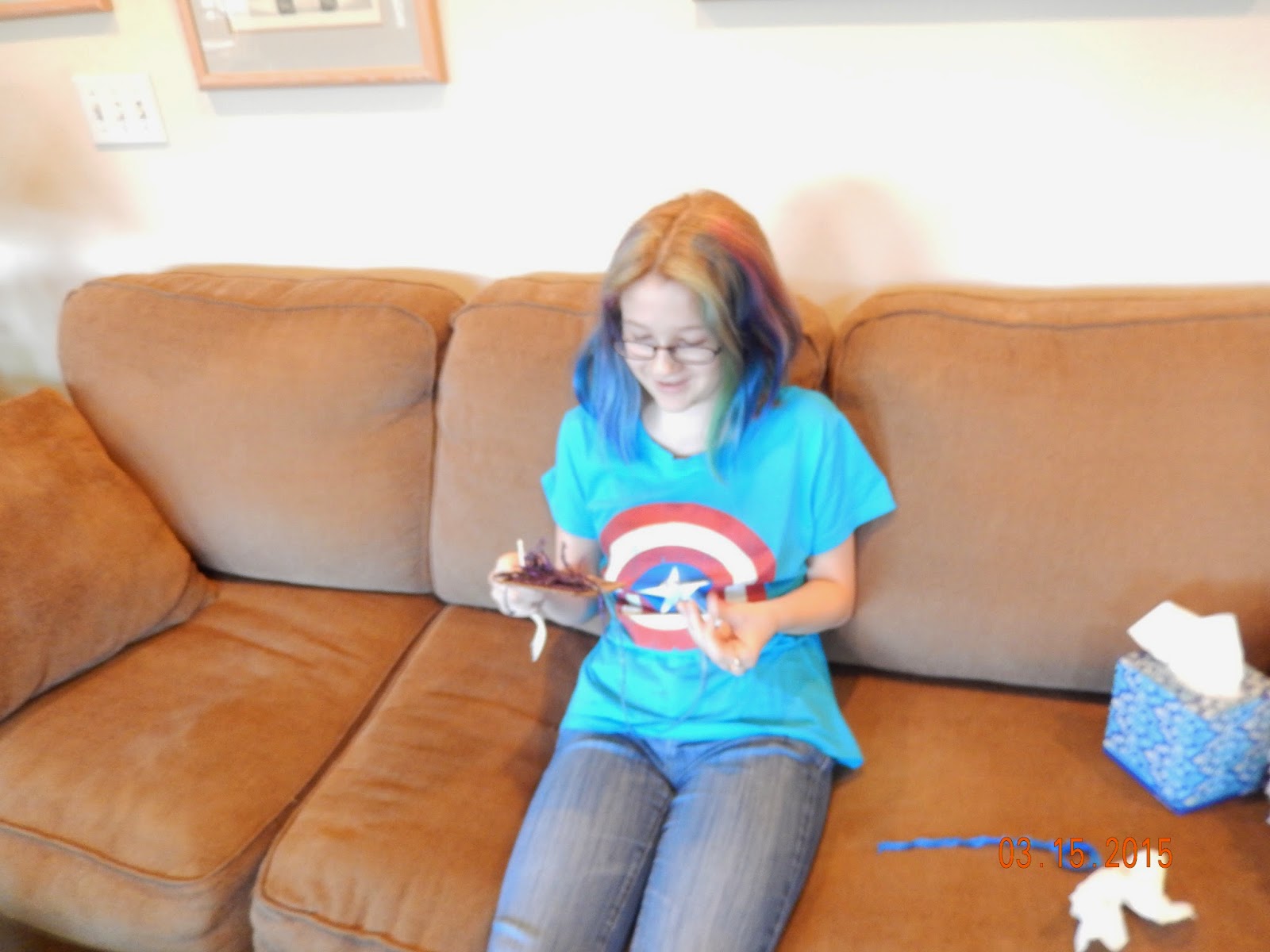 Alexia spent the night Saturday while her parents spent the night at the Lake.  She wants to be a volunteer again at the guild weaving outreach in two weeks but neither of us knew how to weave on a cardboard loom, which is what she will be helping with. 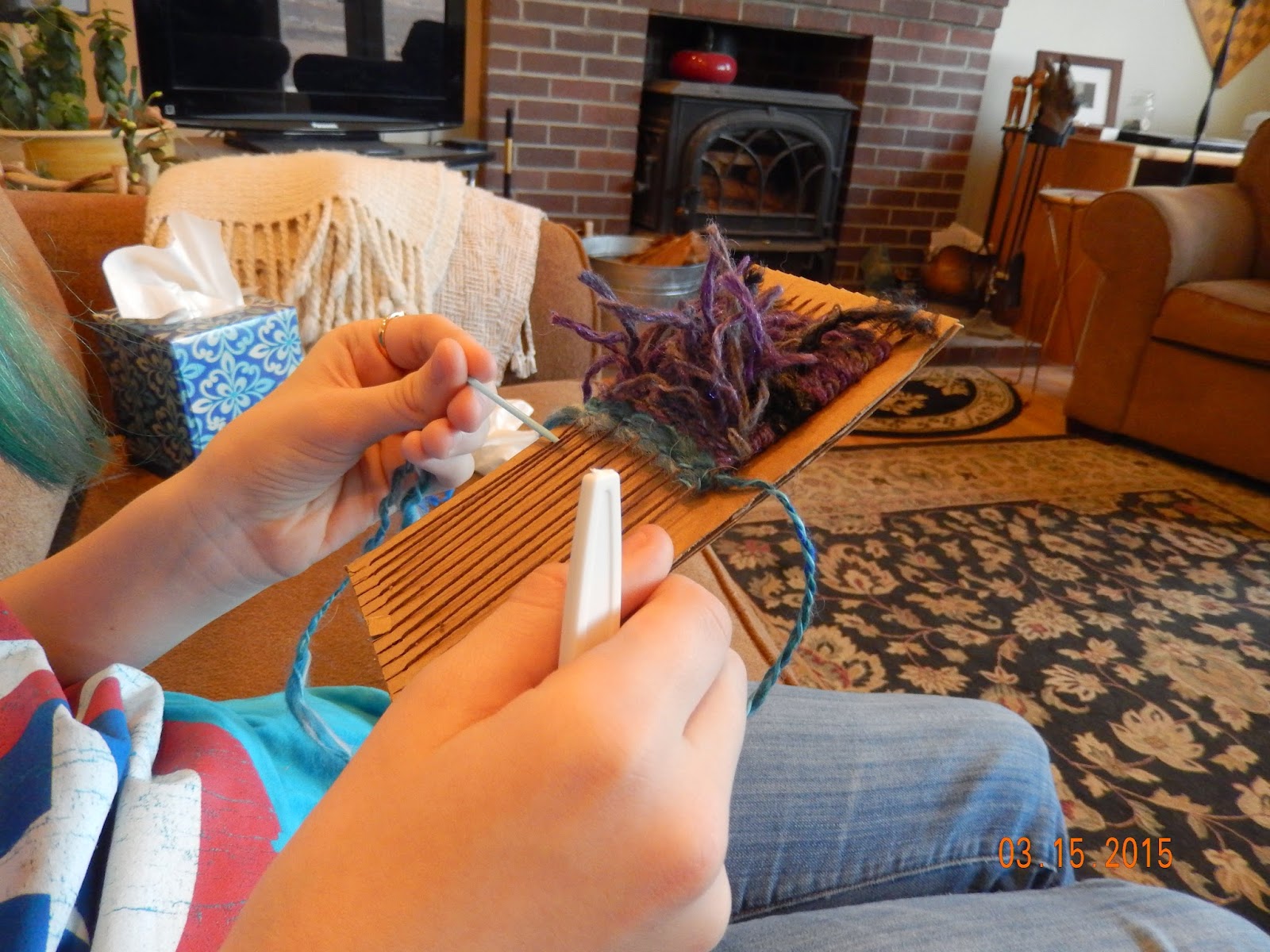 We watched several YouTube videos and with Alexia's basic understanding of weaving from using my floor loom, she was well on her way. 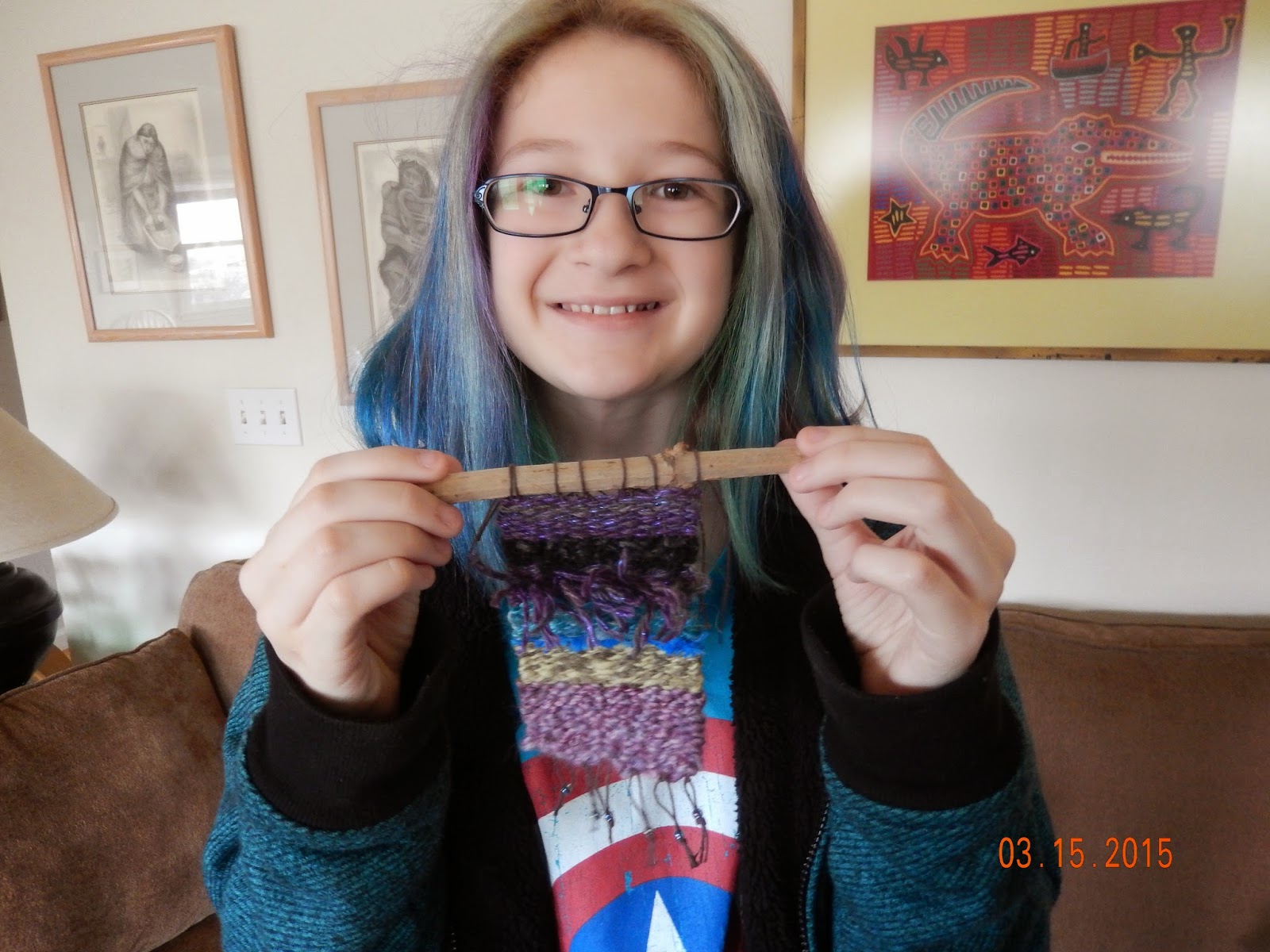 We finished her's up as a wall hanging and it's adorable. 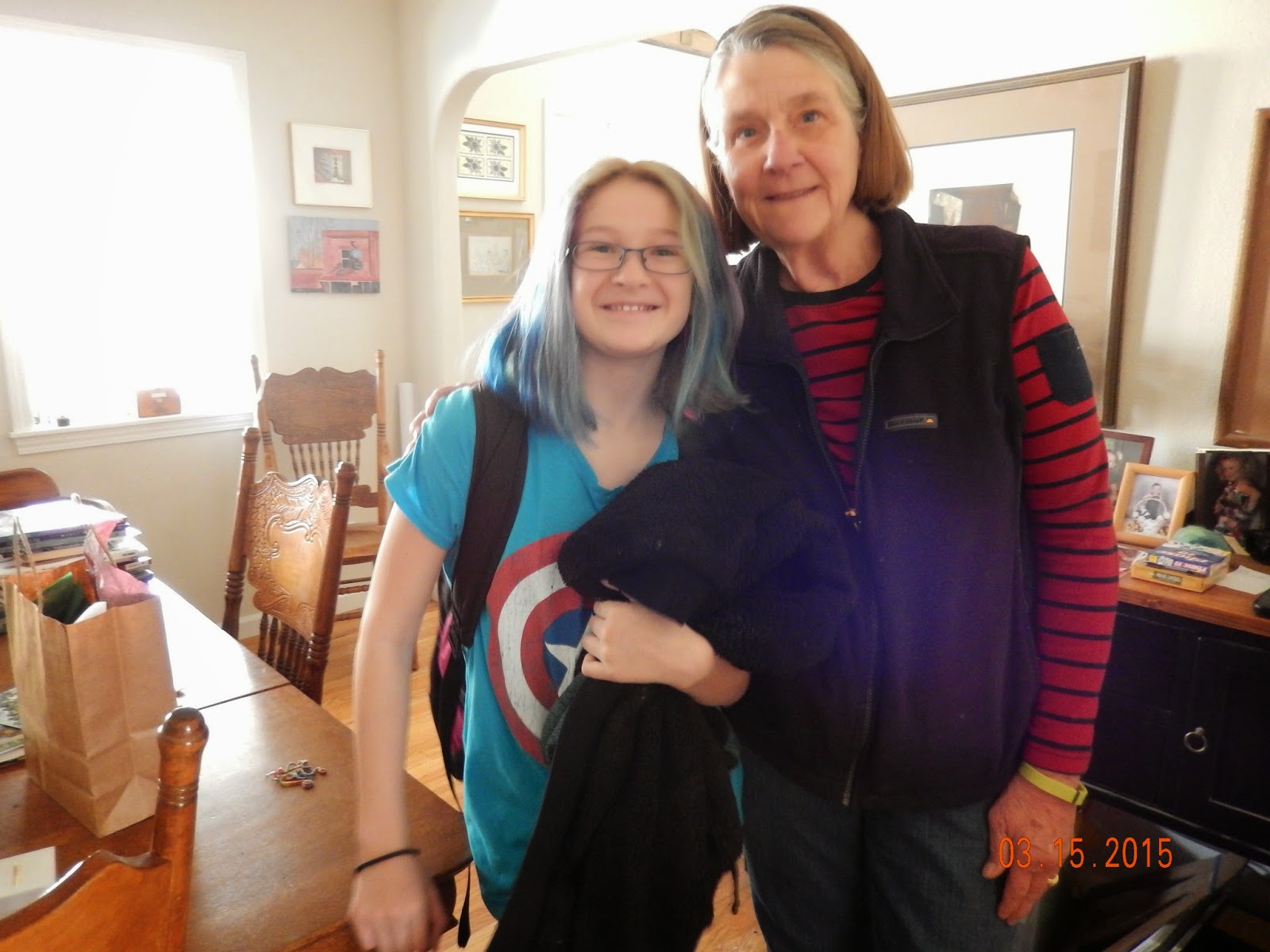 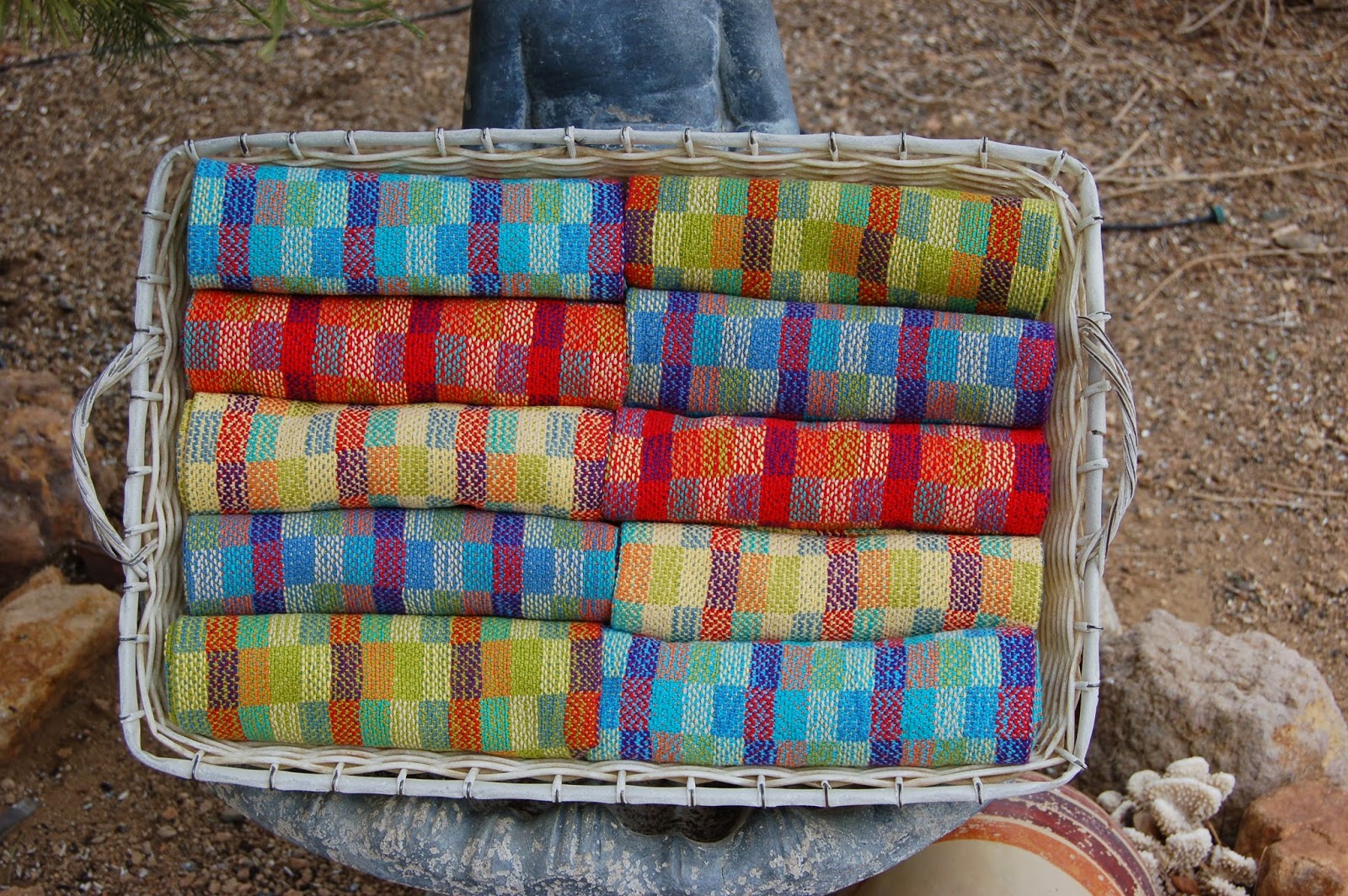 I posted a picture of these towels to the 4-Shaft Weaving Facebook page sometime last week.  It's a group developed for learning weavers and I think turned taquete is the perfect draft to make a new weaver feel competent and happy.  I've posted towels from this draft several times so was very surprised when I got a message Friday night from an editor at Handwoven Magazine, asking me if I'd be interested in submitting these to their home textile contest.  She provided me her email and asked me to send her some photors, then emailed me the contest link. 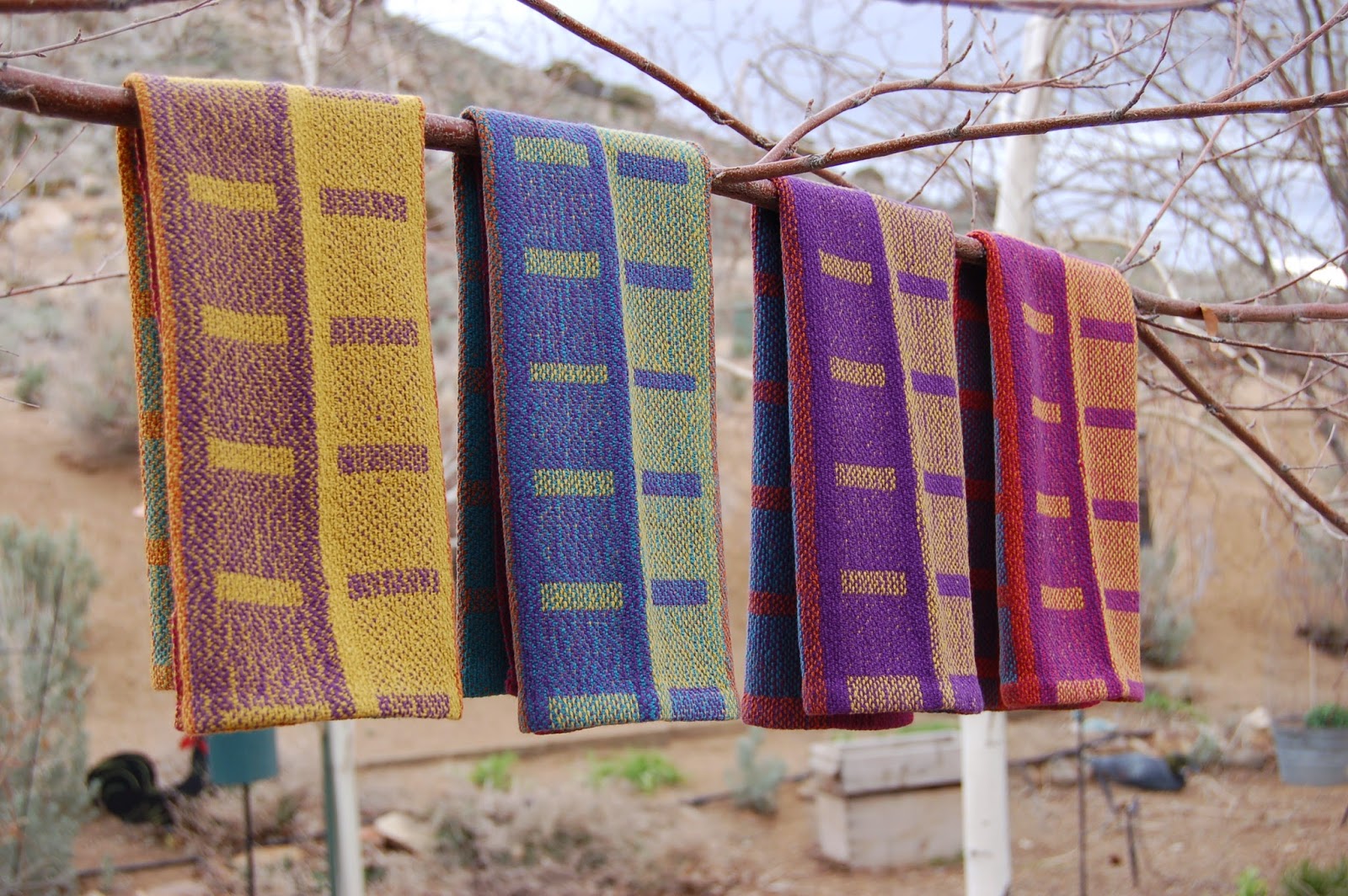 Saturday morning before I went to book club, I spent about an hour taking photos outside.  It's overcast and the indoor available light isn't available.  This is one of the pictures I took, though it's not one I sent.  I ended up making two entries to the contest after Alexia went to bed.  The deadline is this Friday and I wanted to make sure I didn't miss it.  I subscribed to the magazine last month but haven't received my first issue.  I doubt I would have entered the contest anyway, even if I had the magazine.  I just don't do stuff like that.  I'm flattered to death however.  The editor and I have since exchanged a couple more emails.  It turns out that we have a mutual friend and read a lot of the same books - my other favorite thing besides weaving.  What a nice surprise.

Congratulations! I'll be sending lots of positive energy for your contest entry. They are beautiful!

The colors of the towels are lovely, very fresh and happy! Good luck with the contest!

I love those towels! Awesome both in pattern and in colour.

Dear Sharon - I came across this post via Pinterest. I also belong to the 4-Shaft Weavers, but haven't been on FB much lately. Congratulations on your invite for the contest at Handwoven. It's certainly a well-earned honor for them to reach out to you. I love these towels, and love your color sense. Very happy for you. Laurie

The very last photo of the four pieces outside - wow, these are stunning. I'd really like to make some based on your design. Would you mind if I did that? I always like to ask first because I don't want people to think I'm stealing someone else's ideas. I was thinking of scarves instead of towels.

Beautiful job Sharon. You have inspired me. I am just beginning to explored Turned Taquete. What color do you use in your weft? Always the same in this set of towels?