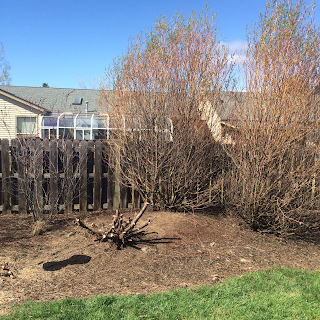 Things are beginning the grow so we can see what's alive and what's not.  Ian held out hope for the shrub that was here but finally conceded that it was very dead, probably had been for a while.  He talked to a neighbor the other day who said the previous owners hadn't done much the past couple of years and then their dogs destroyed what was left.  The bushes on the right are going to get aggressive haircuts this fall. 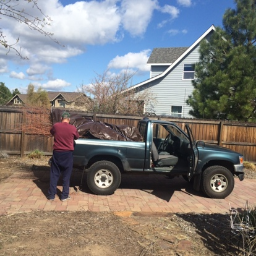 And this is what the shrub looked like after Ian got done - another $4 trip to the nearby dump, the same place our compost came from. 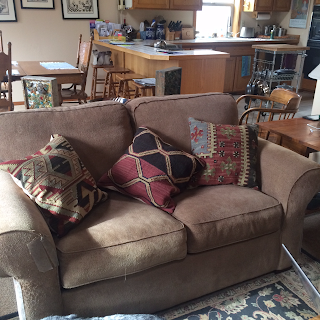 I received a surprise package in the mail a couple days ago.  Malinda, a friend from Reno, moved to AZ with her husband the same time we moved to OR.  These pillow covers are handwoven wool tapestries which she said were too warm for them now.  They're gorgeous and even prettier in person. 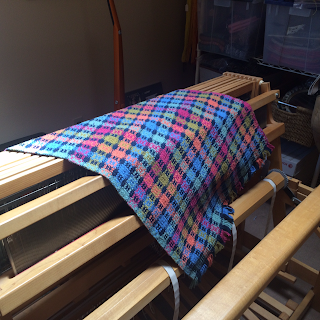 Owen's blanket is finished and fabulous.  I want to report on the yarn I used, and I confess that I chose it because it was cheaper than Brown Sheep Cotton Fleece which I successfully used for the last two blankets I wove in this pattern.  This is Knit Pick's CotLin which was questionable in the washing process.  It left lots of lint in the washer and then filled the dryer trap, twice.  I suspect it will shed again on the first and maybe second washes.  The other downside is that the blanket is heavier than I had anticipated which should be fine for Owen since he lives in Massachusetts.  I think that it's undesirable in a warmer place and I don't recommend it for weaving. 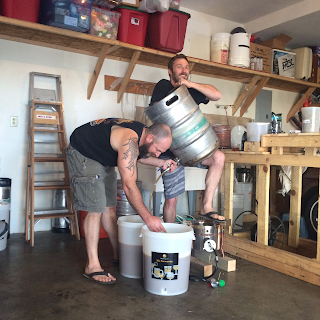 Ian and I went over to Josh and Missy's Saturday afternoon.  The boys wanted to brew that day and then turned it into a barbecue.  We only all get together once a month and seem to have so much to say that we all talk at one - except for when we were eating and what we were eating were stuffed hamburgers.  Josh tied out his new hamburger stuffer press - most delicous.  Making beer gets pretty athletic at times.  They think it's less expensive but it would take years of brewing to break even on equipment and I know all about equipment :) 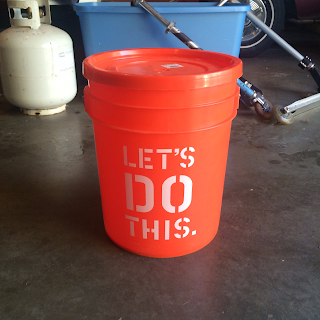 This empty utility bucket was sitting in the work area and it caught my attention.  Let's Do This indeed.  I requested last week that the surgery be moved up and got a call yesterday morning that we're set to go on Friday the 22nd, 10 days from now.  Yikes!

I met with Dr Chang my radiation oncologist at the St Charles Cancer Treatment Center yesterday afternoon where I learned a ton of good stuff.  My cancer is noninvasive so I won't need any of the lymph node business or chemotherapy - happy about that.   A side effect of radiation therapy is fatigue - not happy about that.  I can see that taking care of all this is going to be a part-time job for the next eight months.  I think this means my weaving is going to slow way down and I'm finally going to get a leg up on my backlog of reading.

Dr Chang went over the results of all my tests and in careful detail.  She thinks the source of my cancer is the hormone replacement therapy I was on for 18 years as a hedge against osteoporosis that had plagued both my mother and grandmother.  I've been off of it for probably five years but not soon enough. The good news is that the Center offers free massage therapy, reiki and acupuncture during the course of treatment and one month after.  Let's do this!!
Posted by Sharon at 5:31 PM

Yep. Get it done! It'll be in the past before you know it.

I agree...there isn't any reason to wait, and it's better to go ahead and get it done. The yard is looking good!

The tree that you have in your yard is called a Parrotia or Parrotia persica - Persian Ironwood - http://treesandshrubs.about.com/od/commontrees/p/Growing-Parrotia-persica-Persian-Ironwood.htm It is from the same family as witch hazel and the little flowers that come on in February are very similar to the witch hazel. We have one in our yard, and I thought that's what your tree was. Sounds like they are pretty hardy. T.