Shannon, my granddaughter-in-law, sent me this picture of Owen posing with his blanket.  Babies don't get any cuter than this!

My procedure was last Friday and the hardest part was waiting without water or food.  The directive was nothing by mouth after midnight but I couldn't imagine going over 12 hours without water so called the office for clarification.  They told me that I could drink clear liquids up to four hours before the procedure so at 7:59 I had my last glass of water before my noon appointment which ended up being 2:00 and boy was I thirsty in the recovery room. 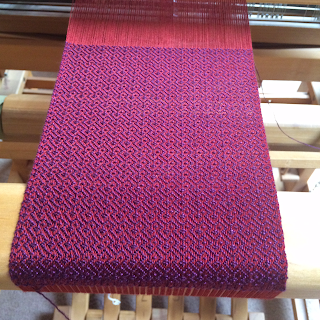 I dressed my loom and started weaving this Friday morning to kill time and keep my mind occupied.  Tomorrow I can return to full activity as my energy allows, so it's nice to have an easy project that I can sit down to.  This is Walls of Troy in 8/2 Tencel. 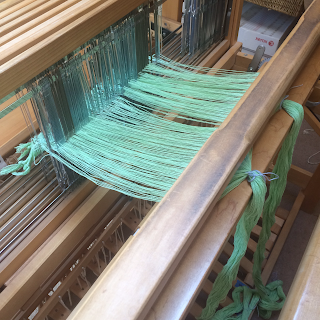 I threaded this sampler directly from a two-block profile draft and I knew what I was doing.  I didn't push my luck though and wrote the threadings for both blocks on a sticky note and stuck it to my loom.  Block A:  1,3,1,3,1,2 and Block B: 1,4,1,4,1,2. The structure is Atwater Bronson which is also new to me.  Note to self:  Next time check heddles before starting to thread a block weave.  Atwater Bronson uses three heddles on the first harness for every single block.  That's a lot of heddles!!!!!

I had to steal some from the 8th harness and move them to the 1st harness and now I need to remember to put them back.  My plan is to finish the sample, cut the warp and rethread on eight harnesses for Turned Twill.  At least that's the plan - I'm feeling mighty big for my britches right now. And of course, I'll do that as energy allows.  I see my surgeon for follow-up May 10th. 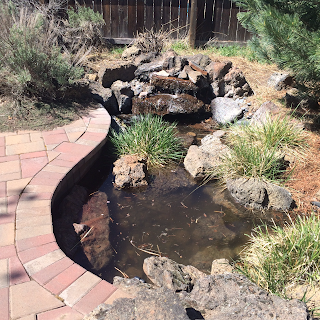 The landscaper who installed this waterfall and the entire sprinkling system came last week, got everything turned back on and repaired one broken sprinkler head.  He knew the Triplets quite well and knew that over the past several years they had lost the ability to keep up with the yard so had let it go.  What wasn't damaged by neglect was damaged by their dogs.  We have a lot of work on our hands but since we both enjoy yard work, there's plenty of it for both of us.  He also showed us where the septic tank is - good to know. 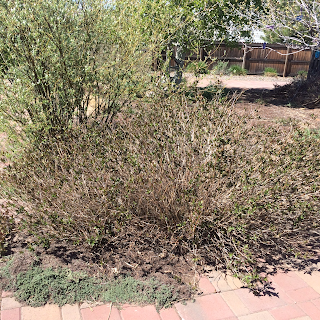 This shrub is proving to be my nemesis.  It spreads through a system of invasive roots that are nearly impossible to pull up.  I took pictures of it and have sent them to the Cooperative Extension hoping that they can identify it and tell me how to eradicate it.  Even Laura was flummoxed and said that as much as she hated to think it, there are times when Round-Up is the answer.  I hope not. 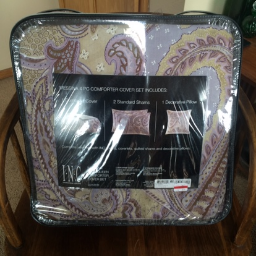 I had to make an emergency trip to Macy's Thursday afternoon.  I wanted to do all the laundry before my procedure just in case I was left with some limitations, which I'm not.  I had just put fresh sheets on the bed when I noticed the yellow spot on the duvet cover that I thought I laundered out a couple weeks ago.  A sniff test revealed it was skunk stink - still.  As always, I seem to find what I need at Macy's.  The clerk helped me find this set marked down to $35 from $300 and the funny thing is we like it better than the set it replaces.

I have a large sack of wildflower seed so my yard task today is to rake, broadcast the seed and rake again.  It's rained the past two days but today is a break in the weather and then it's supposed to rain for the next two days.  April showers bring May flowers - fingers crossed.
Posted by Sharon at 11:06 AM

Counting heddles is not fun....but very necessary!!! ***Ask me how I know!!!! I think you'll enjoy the block study...you'll be making your own designs before long!

At one of our abodes in So. CA we had a bougainvilla that was a huge shrub with tons of dead wood. I went to a nursery to get advice on trimming it and they said to hope for an explosion to eradicate it! We moved not long after. It may have overrun the entire neighborhood by now.

You're doing great, my friend!!!

Nice find with the duvet cover! That water feature is lovely. I love the Walls of Troy you are doing. I've never seen a project with that weave structure, which didn't look fantastic.