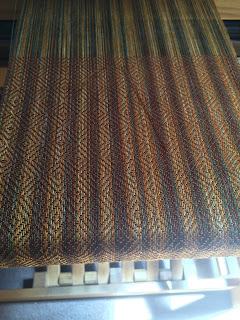 The second scarf from hand-painted bamboo that I bought from Yarntopia Treasures is on Maudie Mae and almost done. Again it's quite striped.  I'm going to take a break from hand-painted warps.  I know I said it before but this time I mean it.  Laura was here last week and disagreed with me.  She likes it. 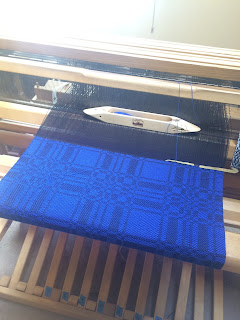 And I have another block weave sample on Arthur so I can take advantage of his 8 shafts.  I just found a threading error so can't sell these but Ian's happy about it.  He thinks they belong in our kitchen where all our various plates have cobalt blue in common.

I gave Laura three of the "towels" from my last sample warp as they were too narrow to be of use for me and I know she can use them in her cheese making.  She called the other day and challenged me to weave these in turned taquete since it's a two-block weave.  I'm mulling over the possibilities. 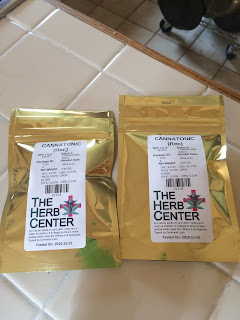 I finally ran out of the marijuana/coconut oil that I made last summer and was forced to finally buy weed.  I didn't know what to expect and was more nervous driving to the dispensary than I was driving to radiation the first time.  And by the way, after today I will have seven sessions under my belt.  I go every day at 3:15 Monday through Friday until I've achieved my total of 33 sessions which should be July 18th.

I went to Cannacopia first, mostly because I've driven by it and knew it's location.  You enter a front waiting area and get checked in by the receptionist.  The room was packed with people who looked for the most part like everyday people, not scary at all.  At some point the door opens and out comes the customer and a "bud tender" calls the name of the next on the checked-in list.  The actual transactions take place in an inner sanctum.

I need high CBD/low THC buds and after the tender realized that I was going to make my own medicine, he told me wasn't going to sell me weed but was referring me to another dispensary that is less costly.  Wow! The second dispensary was The Herb Center and they grow their own, thus passing on the savings to their customers.  My two bags weighed a total of 14 grams (1/2 ounce) and cost me $130.  Clearly I needed to be careful with my preparation. 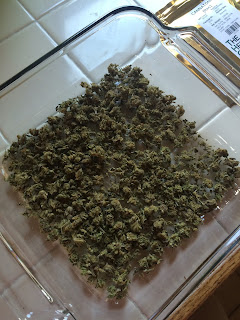 After phishing around on the Internet I chose this recipe and set about to decarb my buds.  Everything I read about making canna oil insisted that you not skip this step.  I don't understand the chemistry but I did understand that this step makes the buds more potent and I reason that means I can use a smaller dose and make it last longer.  Currently my dose is 1/2 teaspoon and I have two cups of oil.  The next step is to learn how to grow my own so I can skip the dispensaries. 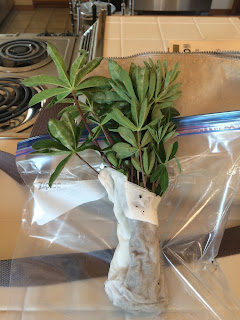 St Charles Medical Center has a nicely landscaped campus and every day I walk by the bed in front of the Cancer Center I'd see that the beautiful lupine had dozens of volunteers.  I asked around for the name of the groundskeeper but no one had any idea.  So Wednesday I took a baggie with wet paper towels and helped myself to these three. 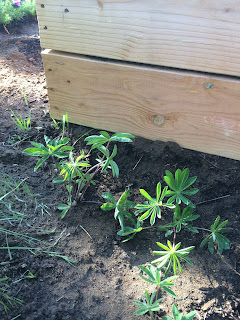 By yesterday morning they looked like they'd been in yard for weeks.  Free plants!  I called it purloined lupine.  One of my friends had a lot of fun with it calling it "lupine larceny" and "felonious flower filching." 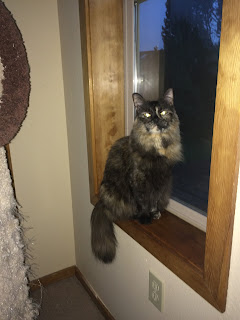 I haven't mentioned Maddie lately but she's doing fine.  She has blossomed since we moved, probably because she has all the windows she could possibly enjoy.  Her fear level has abated greatly.  She still won't let anyone else near her but she gives into curiosity and checks people out when they come over. 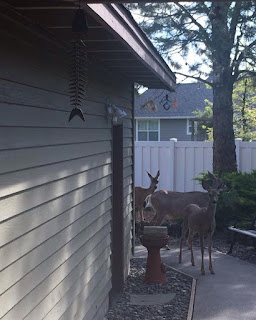 These are the only visitors that she doesn't see.  They're on the outside of our fenced yard and her windows are on the inside.  They like the wild grasses in our front area and we like it that they like them.

How are you feeling from the treatments? Okay? I didn't realize you are going every weekday. We need to talk again!

Yikes, daily. Ugh. Well, I know at least you have a fantastic selection of books to read for some quiet time. Lovely weaving. I never realized you were a plant thief though..... LOL!

My sister-in-law has the habit of plucking seed pods of plants that she wants to grow (and maybe some other procedures as well.) But, I'm sure those plants would have been discarded if they had been left in a manicured bed. Good for you! It's interesting to hear about buying weed legally...I had a flashback to my college days!!!