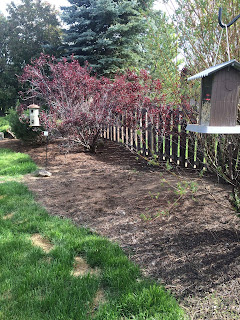 One more plum bush needed to come out before I would have room to plant this area on the side of the lawn. I did it when Ian wasn't home to make it less painful for him.  I think he's finally starting to see the value to cutting back and trimming but he's struggled.  The bush didn't go without a fight though and left three large bruises on my left forearm. 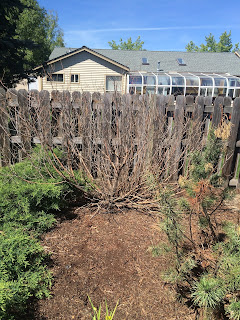 We both agree that this poor bush was dead.  It and the Mugo pine in the right foreground were smothered by the plum that I removed last week.  The pine is making a comeback. 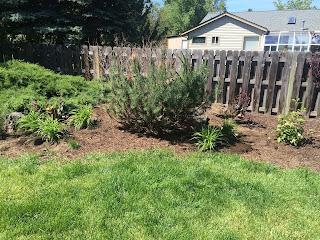 It is looking more robust every day.  I've added day lilies on both sides and you can see that the stubs of the plum bushes are already growing shoots.  I think they'll shape up nicely as they grow - not over 4' tall this time.  The bush on the right is a hydrangea with the growth potential of 12 and it's white so I'll be able to influence the color by the soil amendments that I provide.  I'm leaning toward blue right now. 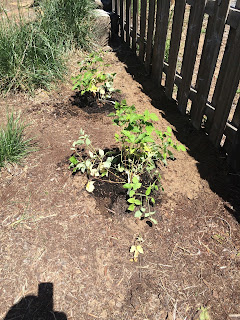 Josh called me Sunday to say that Coastal, a store in Redmond, was having a half-off sale on all their plants through Memorial Day.  Ian and I drove up after tai chi and came home with ten new plants including these raspberries.  I'm hearing from several sources that they grow very well here and we should have oodles of berries next year.  I also put in two blueberry plants and am looking forward to picking my own instead of picking them up at Costco. 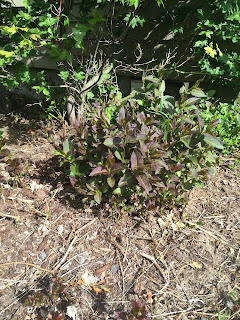 This is the snake in the garden of eden, the creepy creeper that we cut to the ground that is steadily coming back.  It grows like an alien from a science fiction movie. 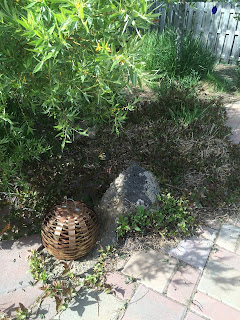 We figure it is occupying at least twelve square feet of our flower beds.  We sprayed it with Round-Up a couple of days ago and aren't seeing much response though the instructions say that perennials with invasive roots can take up to a month.  I'd just love to stop it from advancing for a moment.  Earlier this week I was tearing it out of a forsythia that it had started to climb.

I would have blogged earlier but ran into yet another stumbling block in transferring my photos from my iPhone to my Microsoft hard drive.  It took me an hour to discover that the "share photos" option in the iCloud had gotten turned off.  I got it back up and running to discover that Adobe was demanding that I buy Photoshop Elements 12 which I bought just a year ago for $99.  I had no idea they meant $99 for one year and as I dug though their information I learned that it's actually a subscription service now for $9.99 a month.

The problem is that the photo "viewer" that comes with Windows 10 is a viewer only.  It wasn't until today when I started mucking through it all again that I was seriously tempted to throw in the blogging towel.  But then I discovered that Microsoft Pictures is a very fine photo editor and it's already installed and paid for.  I realize that most of you don't find this interesting but I thought I'd mention it in the event that one day you do need a photo editor and don't want to get muscled by Adobe.  Okay, I'm done with that - dusting off hands.

I'm sure that the deer who visit your yard will enjoy those blueberries.... ;-)

There's a reason all our berries are in our garden area with the 8' fence!

I've wanted to plant berries for ages, but the cost of fencing just not worth it with such a nice and plentiful growers market available 4 times a week. I'm wondering if berries besides strawberries can be grown in containers......

The joys of redoing neglected gardens. It looks like you have it well in hand though. I look forward to seeing the results later in the summer.

my suggestion for berries - bird netting :) They can strip the fruit from a berry bush in no time flat!