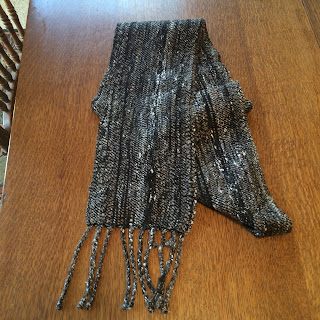 I hadn't planned to enter anything in the Oregon State Fair since I've missed the three local county fairs this year, but after I got a phone call requesting I bring entries to the meeting last Wednesday, I dug around and came up with three things.  This is the only scarf from handspun yarn that I could submit.  You're required to include a sample of your yarn and I only had yarn for this, and actually, it's not from this scarf but for the next one I want to weave like this. 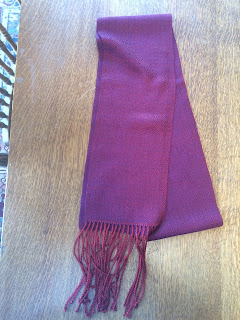 I called my DIL Julia and asked if I could borrow back the scarf I just wove and gave her for her birthday last month.  She said, of course!  The iridescence is really cool. 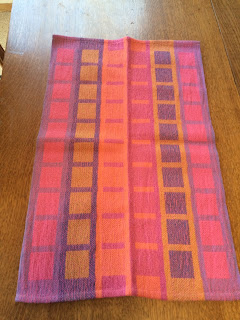 And I'm entering a towel.  Matt and Julia helped me pick this one out when they were here last week. Salem is too far for me to drive but next year I'll be ready to take part in the local fairs.  That's what is fun for me.  We had four "guests" at our meeting, all who had visited the guild booth at the Deschutes County Fair and came to learn more. 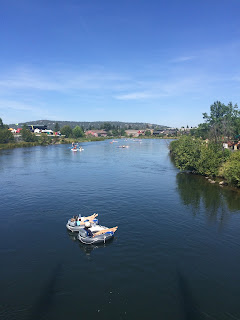 Ian and I went down the Les Schwab Amphitheater for the second day of Brewfest.  Our friend Petey had planned to be here and go with us but was forced to stay home because of a threatening wildfire in SoCal.  We parked in the Old Mill and walked across the footbridge and spent a few minutes enjoying the floaters.  Floating the river is a huge tourist draw.  It's the first thing we saw when we stopped here for lunch on our way back to Reno from Washington about 15 years ago.

You know it's a serious beer festival when you can't see the end of the line of porta-potties.  Friday is a work day and it's mostly us old retired guys so they play old-guy music.  We walked through the gate to Eric Clapton's "I shot the sheriff" - stuff like that. 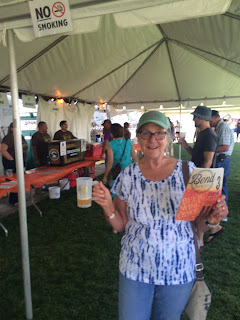 This is a huge annual event and another large tourist attraction.  Admission is $20 which provides the mug and five tokens. Each token buys a 4 ounce taste and I bought an extra five tokens.  The program came in the newspaper earlier in the week and I marked the ten tastes that I wanted to sample.  I missed Petey because I had no one to share beer tastes with.  What you might ask can Ian do at a beer festival since he can't and doesn't drink?  He hunted Pokies and was thrilled to get some very special ones.

The weather was perfect, we ate lunch from one of the vendors and enjoyed the music.  The cool thing is that it's a fundraiser.  Brewfest buys the beer outright and the sample stations are manned by volunteers who queue up to be accepted, coming from all over the state.  All proceeds benefit charaties.  Our kids went the next day which is geared for the younger crowd with costumes and contests.  They went later, stayed longer and drank more.  They're young and now that Logan is 16 and can drive, they have a DD - they call him L'Uber :) 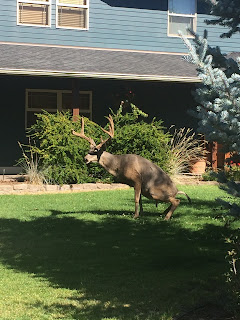 Yesterday we went to breakfast with friends visiting from Reno and came across this guy three houses down from us.  The house is vacant and for sale and this dude was in no big hurry. 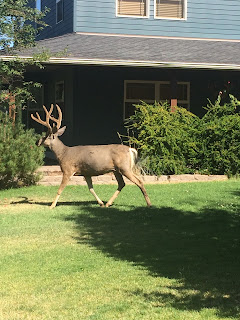 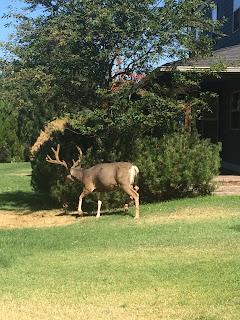 He finished his business and moseyed on.

That was a BIG BUCK!!! I'm so glad you are entering items in the fair...folks need to see beautiful woven articles. And, the beer tasting looks like fun. I would need more than 4 tokens, too!!!!

Nice election of handwovens for fair! The briefest looks like fun. e have a few beer-centric events here too and they are always well attended. Nice buck! Won't any new owners be surprised they have a deer john on their front lawn..... ;-)

I must commend your ability to get Porta-Potties and Moose Poop into a weaving post with the utmost of taste. Thanks for today's chuckle !~!