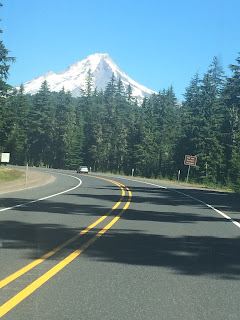 It's been three years since I've seen my sister-in-law in Washington and I realized that we just needed to grab some days and go because there always seems to be a conflict.  We left just as our county fair was opening, and while I'm disappointed to miss it, I wanted to see Georg more.  We put Sammie in a local kennel and son Matt was going to look in on Maddie so we headed toward Mt Hood and Portland on Wednesday. 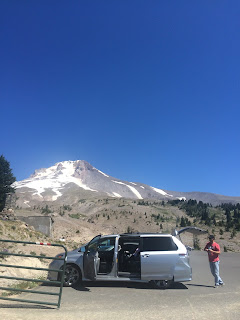 We decided to make Timberline Lodge our lunch stop and once we got there, the source of the name was immediately obvious.  It's constructed at the timberline on Mt Hood.  The ski lifts were running and college students were skiing on what snow is still available. 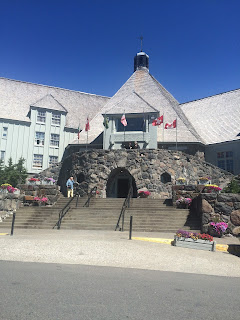 This WPA lodge is a marvel and a source of local pride as well as the Overlook Hotel in The Shining.  The movie was filmed elsewhere.  We were really impressed with the food as well as by the multinational diners around us - very fun.  It's astonishing to think that before the workers could begin construction they first had to build six miles of windy road from State Route 26.  The  construction workers were local as well as the artisans who created the woodwork and handwovens. 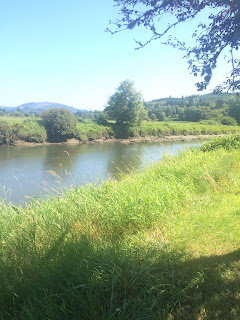 The Grays River is a tidal river off the Columbia.  Low tide. 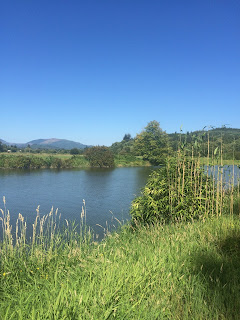 High tide.  Birds and bird songs are part of the scenery.  My brother passed away nine years ago this month but everything here reminds me of him.  When Georg says she could never not live here, I get that.  Once upon a time they had a B&B here called The Farm on Grays River and to understand what a unique and rich place this is, read Sky Time in Grays River.  The author Robert Pyle, a well known butterfly biologist, is a local resident.  There is magic here. 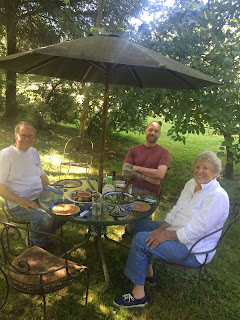 Bob and Georg raised their grandson Jared through his troubled teen years.  Bob taught him a cornucopia of skills including shearing sheep but he learned cooking from Georg which led ultimately to culinary school.   He drives the hour out from Vancouver to check in on his grandma and do the things that she can't do for herself - like wash and set up this table for lunch.  Lunch?  Oysters on the half shell that Ian drove to Goosepoint to pick up.  Georg is an astonishing 90 years old. I plan more visits soon. 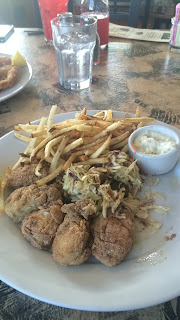 We thought about driving in to Astoria for a day trip but Georg had a bad night and declined.  We started driving but changed our plans and instead we drove out to the end of State Route 4, to Seaview and the bottom point of Washington State at the mouth of the Columbia River.  My pan fried oysters were the absolute freshest and mouth watering that I have ever had in my life.  The rest of the food was unremarkable. 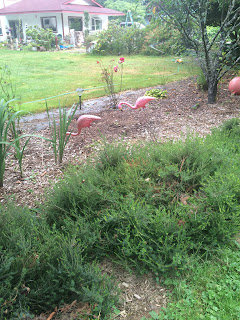 So I went for walks the three mornings we were there, a dicey endeavor since the narrow windy roads have no shoulders, but it's a nice way to see gardens and yards.  And then there were these flamingos.  Georg lives in a little bit of heaven.  Robert Pyle thinks so.  My brother thought so.  I think so too.

How wonderful that you could spend some time with Georg. It sounds like a lovely place to visit.