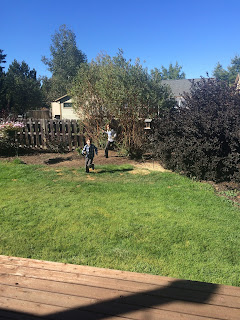 Ian's niece Allison and her husband Jason are finally settled into Tacoma after living in North Carolina for the past six years while Jason completed his PhD.  He'll be teaching at Pierce College and Alli is working at Fort Nasquale and we're excited to have them so close to us.  They came to visit on the Labor Day weekend but Alli had to work Saturday so they didn't arrive until 9:00.  With beautiful weather on Sunday McKay and Gus found all kinds of fun hidie places in our yard. 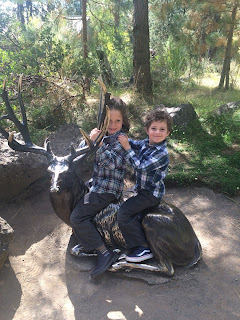 Allison has worked in a number of museums over the years including Ellis Island and has heard nothing but good things about the High Desert Museum so that was our Sunday plan.  You should see the patina on this antlered beast from all the loving attention it gets from kids - and adults. 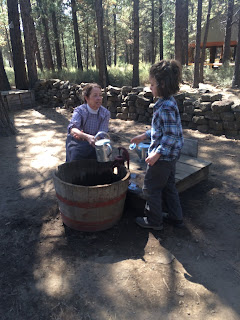 We watched the otters cavort in their newly remodeled enclosure and followed that with a visit to the simulated village which is manned by volunteers.  That was McKay's favorite part of the whole experience.  The volunteer helped her pump her own water. 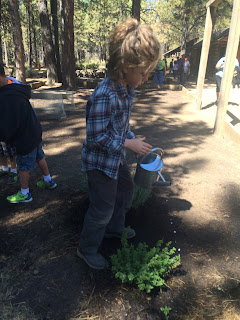 She carefully carried the very full watering can to the garden and gave each of the plants a little drink.  Gus was more enamored with the snakes and turtles. 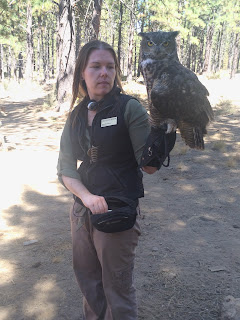 For $3 each we gained admission to the raptor show, an overwhelming display of trained raptors. Allison and I had read H is for Hawk by Helen McDonald earlier this year which brought an extra dimension to the show.  We all sat on the ground and were warned to keep our hands down and not to put children on our shoulders.  As advertised the birds skimmed from point to point just above our heads.  Several birds were on display after the show including this massive owl.  Spectacular!  We ate lunch at Wild Rose, our favorite Thai place, and then walked around downtown and along the river which pretty much used up Sunday. 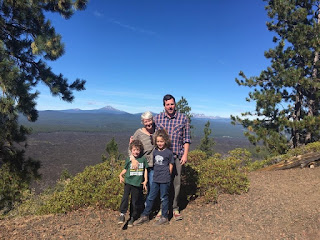 Early Monday morning we drove to Newberry Caldera National Monument and took the bus to the top of Lava Butte for a panorama of the massive lava flows that dominate this area.  Behind Jason, Alli and the kids you can see the peaks of former volcanoes but Newberry is the only one now active, though you can certainly smell sulphur on the half-mile walk around the butte.  Gus said it smelled like rotten eggs. 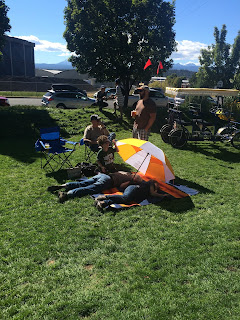 The plan was to have lunch with Josh and Missy but instead of meeting them somewhere, the kids wanted to get a tour of their house and see their beautiful yard where Matt and Julia were married.  We took two cars to lunch and afterwards ended up at Crux Fermentation Project which has a huge lawn.  We had chairs in the car and Alli brought out the umbrella and blanket from their car so we commenced visiting and the kids instantly made new friends.  Live music was starting and the crowd was getting crowded - time to go! 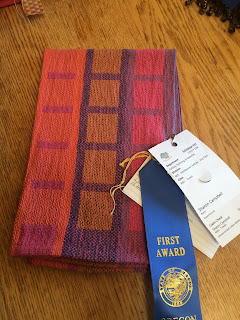 I drove up to Redmond yesterday and picked up my fair entries.  Think of it!  This blue ribbon represents the result of a state-wide contest in a state with lots of other weavers.  I am overwhelmed because I know there were a lot of beautiful things entered.  She took away a point for my ugly hems but gave me two points for my original design.  Wow! 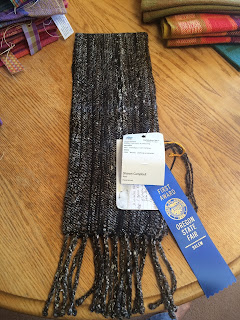 I entered three things and got two ribbons.  The yarn in this scarf is from fiber I blended on my drum carder and then spun.  The judge said that my edges were fluted but it was very pebbly and soft.  I made one like this for me and it's my favorite to wear in the winter which made this ribbon very special to me.  It more than made up for my disappointment at cutting off that dog warp.  I took the one blanket that I completed to our weave/study group on Wednesday as a show-don't-do and one of the ladies took it saying she'd make a pillow out of it, so not all of it ended up in the garbage.
Posted by Sharon at 4:46 PM

Congratulations on your blue ribbons!!! It's really nice to get a little "atta-boy" for your hard work!

Way to go on the Blues! It's nice to get noticed for exemplary work :)

Nice to hear you all enjoyed the Museum!