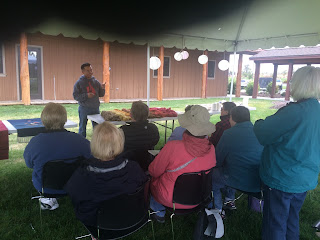 I was back at the Retreat Center on Tuesday for the first day of a natural dye workshop.  The same workshop was offered on back-to-back days because the instructor, Francisco Bautista of the Portland Handweavers Guild, wanted to keep the class size down to ten a session. 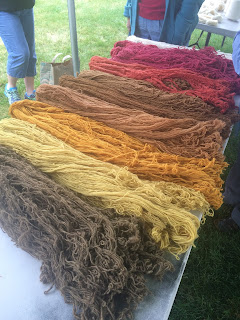 These are skeins he brought for demonstration. 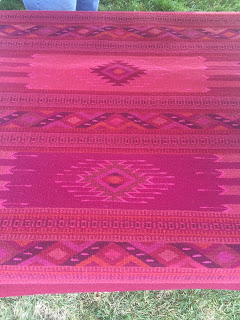 He is a third generation weaver/dyer from Oaxaca Mexico, dating back to when only men were weavers and women worked in the kitchens, though he says that has changed now.  He has woven since he was eight and his wife began weaving when she was 14. This cochineal rug is one of the sample rugs he brought. 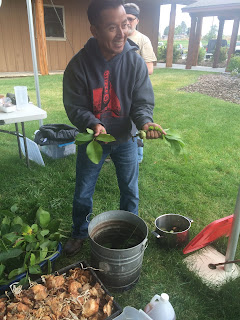 He brought bins of dye stuff but we only had time for yellow onion skins, marigolds, cochineal and black walnut which he is pulling apart here. 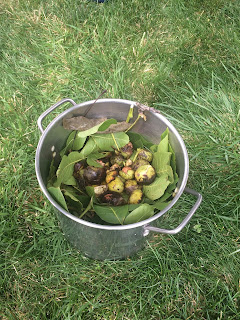 Everything went into the pot, walnuts, stems and leaves.  He used a gallon of water to cover these plants for four ounces of wool.  He didn't premordant for this or cochineal and sometimes he said he will put premordanted and unmordanted yarns into the same dye pot to get different shades for his tapestries. 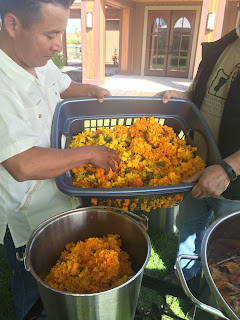 We did the same with marigolds.  He soaked the yarn for 30 minutes while preparing the next dye bath and he counted cooking time as the dye bath time.  He didn't count the cooking time of the yarn, just the soaking time.  When the dye bath had boiled for 90 minutes he removed it from the heat.  The time the yarn had been in the pot wasn't relevant since they're going to sit together for the next three days.  He calls this method fermentation and says it's the way he learned it from his grandfather. Again, no mordant. 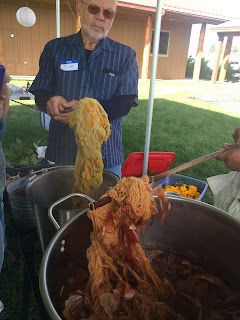 We compared the two yarns at the end of their cooking period.  The marigold yarn is yellow and onion skins made gold.  He doesn't often use mordant, even alum, over concerns of their toxicity.  Nevertheless, he gave us a recipe for mordanting wool: use 15% alum and 5% cream of tarter, and that is percentage is calculated per weight of wool. 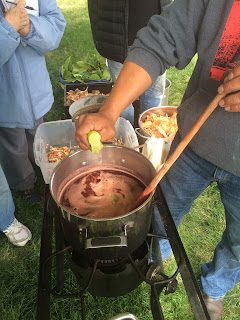 For cochineal his mordant is the juice of one lime and 1 ounce of apple cider vinegar for four ounces wool. 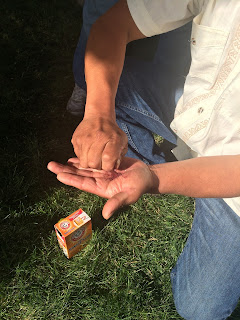 To show us how to get purple, he crushed some of the cochineal beads in his palm. 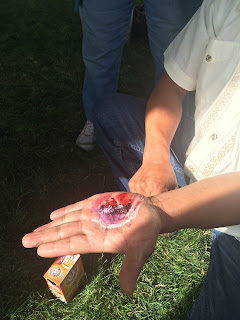 Then he added baking soda and squeezed lime juice into his palm.  That's his recipe, just keep mixing until you like the color. 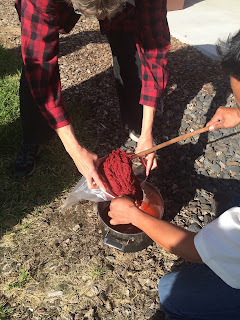 Our workshop went from 9:30-4:30 and it was crammed full, every minute of it.  We poured the yarn and due liquor with plant material into large baggies for the three-day fermentation process.  To get even color he recommends stirring and turning the yarn three times a day.  Volunteers took these home to babysit.

It was a cold blustery day but we were enthralled by the easy way he approaches natural dyes.  I have always enjoyed the colors but I have never been able to think of a practical way to use the wools. And in spite of owning five books on natural dyes, I have never gotten much of any color besides yellow. Francisco also teaches a class on weaving tapestries on floor looms.  I hope our guild will bring him back for that.  I can see me doing that.
Posted by Sharon at 2:26 PM

What a great workshop!!! Are you going to do some natural dyeing???

Your review has succeeded in making me want to take this man's class, even though heretofore I have never been interested much in dyeing, or in natural dyeing AT ALL!

You can go down as far as 7% alum to mordant with. I use 10% just because the math is simple. Cream of tarter can affect some colours, especially like madder. It isn't actually a mordant but I think it is used to make the mordant bath less alkaline and less likely to make the wool brittle. I rarely bother to use it and have had no problems. Alum is usually used between 7% and 25% wof. However any more than that and sometimes even at 25%, it can make the yarn or fibre sticky.

Ooh, this sounds very fun! You keep busy and do the most interesting things.