Falling in Love with Knitting Again 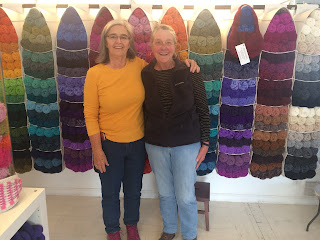 I got an email from Diane Soucy a couple of weeks ago saying that she and Fred were going to be coming through Bend on their way to the Columbia Gorge Fiber Festival.  She didn't know yet what day they'd be here but she'd call when they arrived.  We had to play phone tag and work around my physical therapy appointments but we hooked up at the LYS - how appropriate since Diane is a knitwear designer!  They had never been to Bend before so next we drove over to the downtown area and I gave them the cook's tour.  Diane hit every shoe store :-)

They came back over to our house and we visited some more. They were leaving the next morning but when I sent her a picture of the Kelbourne Wool that I won last year from the Handwoven home textile contest, she said it could be a fantastic sweater.  They were shopping but would come by on their way out of town. 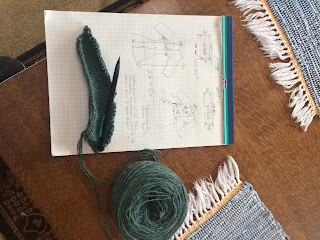 I knitted like a mad woman to get this swatch and Diane showed me how to design the sweater to go with it.  It's going to be fantastic just like she said.  I'm knitting from both ends of the ball with this yarn and will start knitting the raglan from the top with just one color, then the next skein I'll hold two different colors together and on down until I've used all five colors.  I can't wait to start except I need to finish my other raglan first.  It's a good thing the World Series is going on so I will have plenty of knitting time. 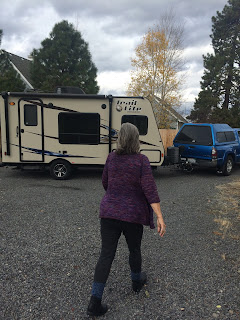 We trotted out to their trailer so she could show me samples, and also let their dogs out.  For those of you who know Diane, yes she still has Boston Terriers and yes, she still have three of them :) 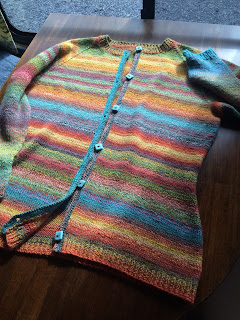 I went from not being interested in knitting to falling in love with it all over again.  Twenty years ago Diane turned me into a "maniac knitter" - her term, and it's so good to be back.  This sweater is from variegated yarn. 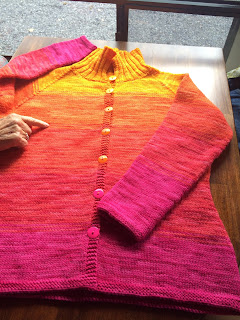 This is the sweater she wanted me to see because it's what she has in mind for my Kelbourne Wool. She bought the yarn at a show and it's from Happy Fuzzy Yarns.  Scroll down to Gradient Packs. There are five colors in a pack and the yarn is as nice as Malabrigo.  I see something like this in my future, only with different colors. 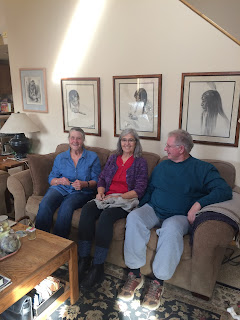 Yeah, the picture is staged.  We thought it would be funny to sit with our knitting on the sofa.  They're bird watchers too so while we visited we watched the scrub jays fight over the corncob feeder that Ian hung outside our living room window.  They cleaned out one cob so he hung another.  I think we're easily amused.  And a good visit was had by all.
Posted by Sharon at 3:04 PM

How wonderful to rediscover an old love!!!! I remember your knit hats! And, you got to visit with an old friend, too!!!