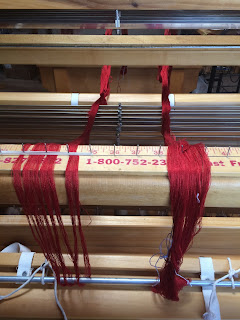 I know I said the last time that I tried to warp from the back that I would never do it again but with 30 threads per inch, I was motivated to make it work.  I read Chandler's chapter on warping from the back and thought I was following along step by step.  The other end of the warp chain was wrapped around the front beam which I thought was well secured, but when I started to wind it on to the back bean, the slick bamboo unwound itself and the metal apron rod hit the floor.  The problem is that the rubber bands on the raddle released the threads at different lengths and produced a tangled mess. 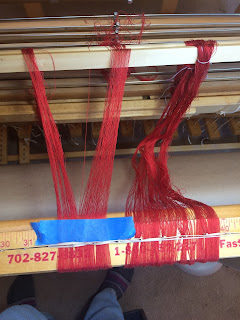 I was lucky that Laura was coming to town the next day so had her take a look at it to see if the warp could possibly be salvaged. I totally lost the cross on the 3" bout but the threads were in pretty good order in the raddle so she put the tape on it to secure it.  I rebuilt the cross one tedious thread at a time.  It's not that I stubbornly refused to learn to warp from the back, I just don't get it. 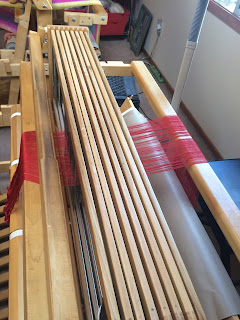 Once the cross was repaired I found that the rest of dressing the loom was pretty easy.  I was especially concerned about how it would feel to thread all eight harnesses from the front but I think it's actually easier on my neck than from the back (which is done when warping from the front.) 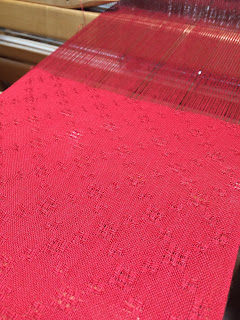 I'm using the same huck lace pattern that I used on the baby blankets but with 16/2 bamboo it's a much different cloth.  I got it in my head that it would be fun to have a red scarf to wear during the holidays.

Once I got the warp secured I was pleased with warping from the back.  I'm still missing a step and will have the same experience if I do this again on my own, but Linda Gettman came to my rescue.  I'm going over to her house tomorrow afternoon because she has offered to show me how you're really supposed to do it.  I can see the importance of warping from the back, especially when weaving with small threads because I had absolutely no threading or sleying errors.  If you recognize Linda's name, that's because she just had her Crackle Weave runner published in the most recent issue of Handwoven. 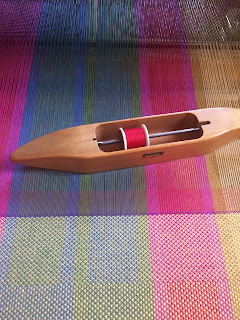 She also told me that you can use sewing thread as weft for dish towels hems.  She showed me one of her finished towels and boy does it make a nice flat hem.  I forgot completely about that on these towels until nearly the last one.  She said she just slides the spool onto a boat shuttle.  An empty spool on either side should make it even more effective.  I'll empty a couple of sewing thread spools with ugly colors before I get to the other end and see if it tracks better. 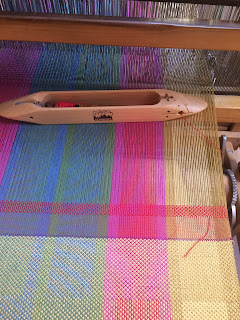 One inch of thread and now I'm back to weaving with 8/2 cotton.  I wish I had known about this a long time ago.  I've never been happy with my hems because they're just too thick.  It's one of the things I love about weaving - there is always something else to learn.

Ian had happy news today.  Yesterday he went in for an x-ray and today his urologist told him that the stone is gone.  The next step is an appointment to talk about a lifelong diet and strategies to keep kidney stones from being a recurring problem.  The doctor's parting words were "stay hydrated."
Posted by Sharon at 4:51 PM

I hope you get some good pointers on warping from back to front. I wish I were closer to walk you through it.

Do you need to put rubber bands on the raddle? I have only needed to do it one of my looms and I put them at the top of the nails just to keep threads from jumping out of their section. I don't want them to create drag on the warp as it winds on the back beam.

If you have the lease sticks tied at the ends you shouldn't ever lose the cross so be sure to do that.

I've never wound the warp around the front beam. I just let the chain hang over the front, no need to secure it.

I'm sure after you get more pointers on it you'll do great with no issues.

I learned to dress a loom back to front, so it just makes sense to me...but I would probably panic if someone told me I had to do it front to back!!!! I'm glad you have found someone to walk it through with you.


Warping a loom (whether back to front or front to back) isn't the easiest thing to learn and, if I may say so, Deborah Chandler's book can be rather confusing (my own view is that she has too many photographs and not enough diagrams). If it makes you feel any better, when I was learning (pretty much self-taught), I lost the cross three times!

I would advise getting a publication that's clearer - I think Interweave Press have some very good offerings, although many of them are sold on the front to back method. This is fine for short, non-fine warps, but not the way to go with fine threads. (I think there's a YouTube video available on warping back to front.)

Cindie wishes she were nearer to you; well, I'm in South Africa (one of the reasons why I'm self-taught)!

Are there any guilds near you?

Let me end by saying that Deborah Chandler's book is very good on the whole - certainly encouraged me to keep going.