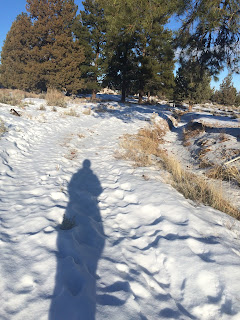 We rang in the new year with last years snow and because of abnormally cold temperatures, it's also this years snow.  I learned the hard way that the slip-on strapless YakTrax don't stay on my snow boots.  I've lost two pair on my walks so my Keen snow boots will have to suffice on their own and I'll just have to stay away from the icy bits. 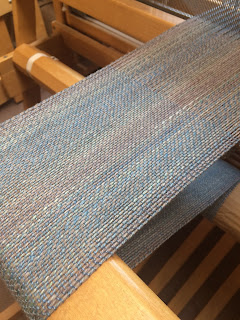 I've decided after trying to weave with fine yarns and learn to warp them from the back that it simply isn't my cup of tea.  I had warped Arthur with white 16/2 bamboo in huck lace, one for me and one to sell.  I fought with warping from the back even though I was careful and went slow.  After a dozen warp threads popped on the second scarf, no doubt threading errors, I just cut it off and called it quits.  Instead I'm returning to my comfort zone of warping from the front and weaving scarves from my handspun yarns.  I put a three-yard warp on yesterday and loved every second of weaving on it.  It will be done today. 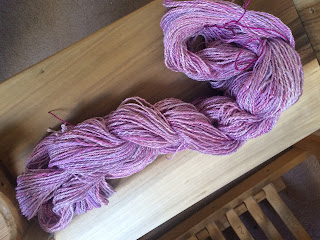 I already have a second warp ready to go.  This is much more fun and it gives me a reason to return to spinning though I have enough yarn in the bin that I won't need to spin anytime soon.  Plus I sell far more scarves from my yarn than from commercial yarn. 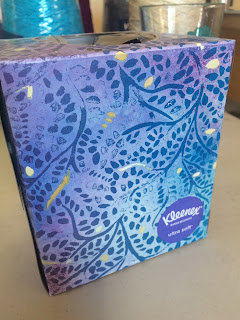 I was taking this empty Kleenex box out to recycling when I was arrested by the pretty colors and thought they might be the inspiration for a new dishtowel colorway. 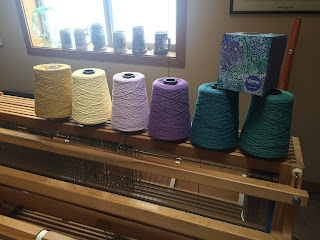 I started with these cones but Old Gold on the left was too dull. 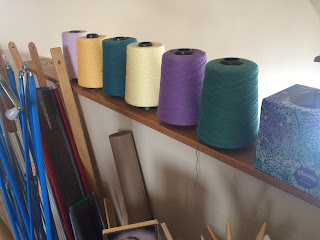 I twisted threads together from the pairs and realized that the ice lilac on the left would get completely lost. 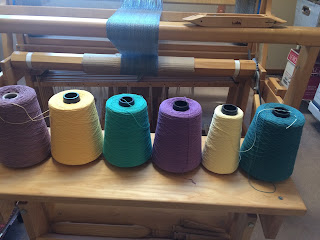 So I substituted the mauve (on the left) and at this point, I think this is my final answer.  Now I'm trying to decide how many towels I want to weave.  My standard is ten.  I guess I'm not completely sold yet. 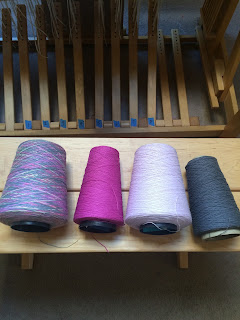 So in the interim I'll weave towels from these cones.  I've had this cone of variegated yarn for almost as long as I've been weaving but haven't known what to do with it, which is why I'm just weaving four.  I think it's promising, at least in theory.  I'll put the variegated yarn on harnesses 2 and 4 so all the square blocks will be that, plus the solid it's paired with.  It'll either be a hit or a miss. 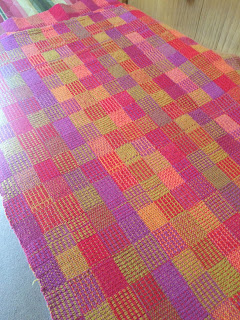 And then there's Crackle.  It's so pretty that I've decided to try it again this year, but with just two shuttles next time.  I couldn't manage three shuttles and made an error an inch.  This was the first towel and yarn from all three shuttles kept getting caught on the apron rod and breaking at the selvage.  It took a week just to weave this one and I was overwhelmed. 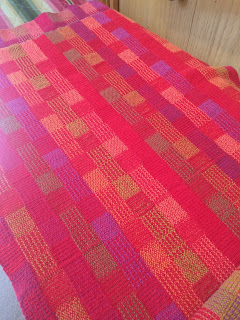 So for the next three towels I just used one shuttle and tried to accustom myself to the changing treadling each inch and keep track of where I was.  It went better but I still made tons of errors.  The fourth towel was error free until the last inch and when I saw it, I knew I wasn't going to unweave and go back.  None of these are suitable for dishtowels so I'm not going to hem them.  I think I'll sew something out of them, cutting between the bad spots - either a bag or a stuffed toy or...?

I've always warped from front to back, but the new loom needs to be dressed from back to front. However the front beam, reed and treadles can all be removed, and the shafts locked up at shoulder height, making it easy to thread. I lucked out that way, for sure.
Your crackle towels are pretty, despite any errors. I tend to shy away from hard to correct patterns or ones so complicated it becomes work to weave.
Stay warm!

Sharon I'm so glad I found you again! I was following you on in stitches and somehow you got deleted (cat walker?) your weavings are incredible. Stay warm. It's cold and icy down here too. ROsie B.