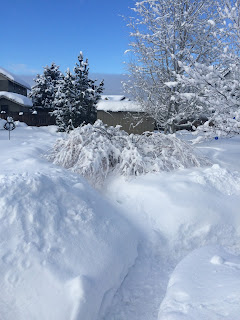 It snowed for the past week but this snow fell on top of the past two storms and quickly became unmanageable.  Ian has kept at the paths in our yard so Sammie has a place to pee.  It's so traumatic for her.  She holds it until she can't and then she desperately sniffs, trying to locate one of her spots.  But for all that, it was an utter joy to have some sunlight today.  The birds were singing and so was I! 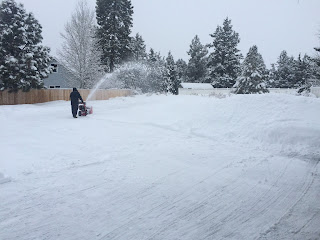 Thank goodness we had the good sense to buy a TroyBilt snowblower when we did because they come at dear price now.  Son Josh bought the same model last weekend.  It was the last one in the store and he paid top dollar for it, but was glad to get it.  He said it was from the money he had saved to put power in his shop but then he realized he wouldn't be able to enjoy it if he were dead.  He says that we are now a Two TroyBilt family. 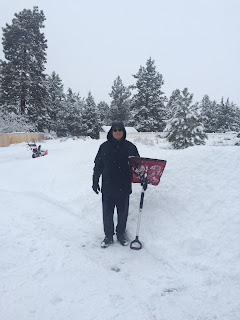 Ian gamely posed with his indispensable snow shovel. You reach a point where there's no where else to put the snow. Yesterday was declared a Snow Emergency - schools were closed, the public was encouraged to stay off the roads, the mayor released all non-emergency personnel and set up an EOC to deal with the large number of traffic collisions.  That is the 4th snow day this school year. 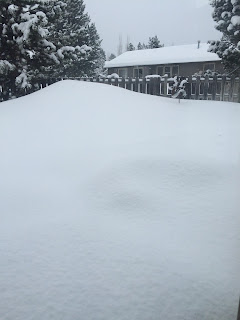 Our backyard isn't going to get shoveled and doesn't need to be. 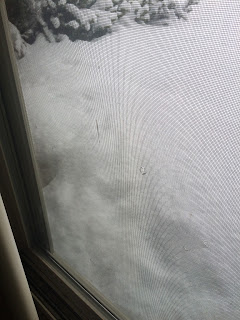 However the night before last we were abruptly awakened about midnight by Maddie yowling like I've never heard before, arching her back and storming around our room.  It was unearthly.  I looked out our door and right in the left corner there was a crouched raccoon staring into the house.  Ian was concerned that might have gotten trapped beneath the deck, and was struggling to get out at this end.  Just to be safe the next day he dug out an area in the event other animals might be trapped under.  We don't need to discover we have a ripening raccoon come spring. 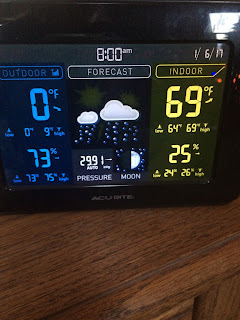 As long as I can remember I've heard the expression that "it's too cold to snow," but I'm here to tell you that is not true. 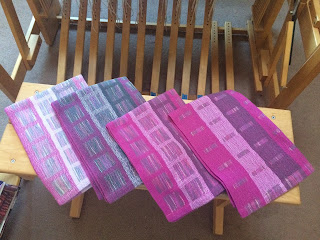 I made the best of my Snow Day Challenge and finished off the towels using variegated yarn.  I'll probably call them confetti for my record keeping. 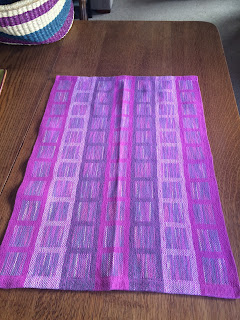 With the extra 3" panel in the center, these towels are larger than I'm accustomed to.  I think they might be better in a bathroom.  I'm sure they're more absorbent than terrycloth towels. 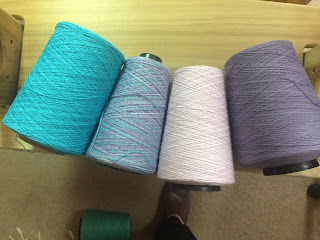 I've pulled these together so make another Four Towels from Four Cones challenge with the last cone of variegated.  After five days we are going to be able to get out tomorrow and run our errands so weaving will wait.  Our weather is predicted to warm up on Sunday with several days of rain in the forecast.  That should keep things interesting.

Lots of snow here too. It was nice fluffy stuff until the rain happened on it, then more snow. We never could survive up here without a plow vehicle and some times Gene spends almost all day grooming the 1/4 mile driveway, the barn area and up to the paddock. Right now we would have to take fence down to get the horses out, the gate is snowed in. But since this snow pack represents how good or bad our fire season is, we rarely disparage it. Plus it' been great to stay home so much!
Love the colors for the new towels, I've got another band measured in similar ones.
That turned ticket must be fun, because you sure do a lot of towels in it.

We've had weird winter weather. It can be frigid and cold, then 2 days later, it's above freezing and rains. We had tons of snow, but the last rain, just melted it all away. That isn't good for the farmers, though it does make driving easier.
When it gets really, really cold here, we don't often get snow. Those are usually our sunny days. I think it has something to do with lake effects.
Those pink and purple towels remind me of hyacinths and tulips! Those sure would be welcome right now.

I'm not usually a fan of variegated, but WOW! There's something so appealing about those! It's almost like I'm seeing a different texture through the "window". I think I'm going to have to give them a try myself.