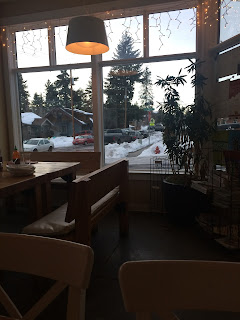 I must say that February looks an awful lot like January which looked an awful lot like December.  Mind you, I'm not complaining.  We're getting used to parking on the snow and ice and wearing snow boots for daily footwear..It's just that I've never lived anywhere so cold that snow doesn't melt in between storms.  It's good weaving weather, that's for sure. 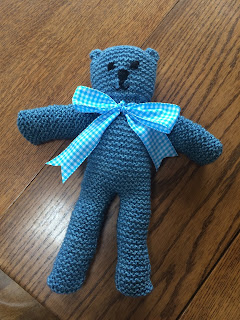 It's good for knitting too.  I finished Owen's birthday bear and got it out in the mail today.  This little blue bear is handspun blue-face Leicester that I put in an indigo pot a couple of years ago at Mim's house.  The dye came off on my hands while I was knitting so once I was done, he got a good dousing in a vinegar bath to fix the color.  Either that worked or else I was finally able to rinse out the residual dye. 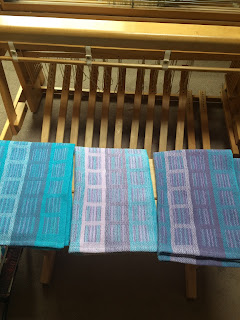 Laura was in Bend today and stopped by before going home to Prineville.  She wanted to see what I was working on so I showed her the second set of confetti towels.  She said they're the tide pool colors of her DIL's kitchen and she bought the one on the left. 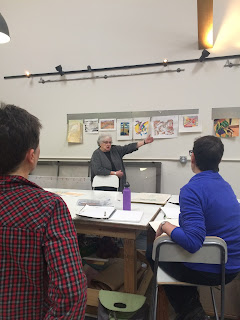 And speaking of dish towels, this is Pat Clark, our amazing instructor and mentor to many at the class critique last Saturday.  She gave us a new assignment and again two periods of open studio, so at the Monday night session Sue brought up my colorful dishtowels.  She bought several towels from me at the guild holiday sale last November.  Pat stopped by visit Mary Wonser with whom I was sharing a booth and ended up buying a couple towels too.  Helen announced she was tired of hearing about my wonderful towels.  She wanted to SEE them.  So they asked me to bring them to the final class session this Saturday. 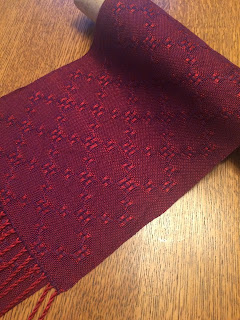 As I was leaving our open studio session today, Pat reminded me to bring my woven items and to not be embarrassed to attach price tags.  I told her that I've been setting examples aside and hoped it would be okay if I talk a little about color blending in weaving.  She loved it so I'm going to get to talk a little about optical color blending.  I think they're going to be blown away by iridescence.  I know I am. 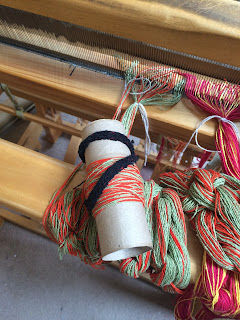 I started a dish towel warp in the bright happy colors of zinnias.  I've been a little frazzled this week and was squeezing out a few minutes here and there, and as you all know, haste makes waste.  I was short four warp threads.  The few times I've done this before have resulted in a tangled mess so in desperation I wound nine years of the missing threads onto a TP roll and secured it with a sock looper.  I posted this to 4-Shaft Weaving on Facebook and another weaver said that when this has happened to her, she winds the yardage onto a bobbin in a heavy shuttle and sets it on the floor for tension.  I will definitely keep that in mind. 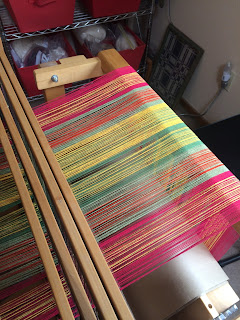 I had some time today to start dressing my loom.  I cannot wait to see how these colors build and develop when the optical color blending happens.  I was careful to make sure that there's a light value in each pair.  I have an example I'll show on Saturday of two analogous colors with the same value that lost their way.  I'm a little nervous about talking to art school artists about color but at the same time I'm really excited about it.

I can "see" the zinnias!!! I'm looking forward to seeing the towels in progress.

We don't have your amount of snow, but we've been swinging between white scenery and dark, dreary grey! I love your Zinnia colours. They remind me of spring.