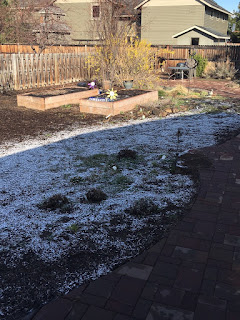 Yesterday morning we awoke to this.  This winter just doesn't want to let go! 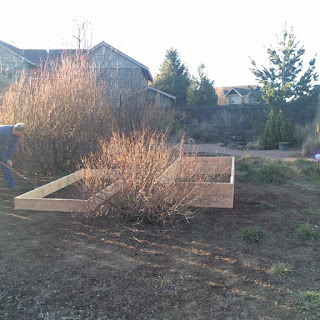 Just one year ago yesterday (according to Facebook memories), Josh stopped by after work and knocked together our planter boxes.  They tell us that every winter is different. Today, the last day of spring break, was blessedly sunny and people came out of the woodwork to enjoy it! 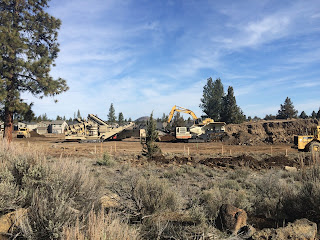 I moved a peony today which is no small feat when the ground is rife with lava rocks  I ultimately dug up a rock and used the cavity for the plant.  These guys are preparing the ground for the last section of the nearby Bridges subdivision.  First they have to do something with the rocks.  Click for big and you'll see a small pile of them on the right.  The big tan thing is a rock crusher and there are two. They've been keeping them both  busy for several weeks now.  The rocks are fed in from the right and crushed gravel spills from the left.  A front loader scoops it up and dumps it into a truck.  I have no idea what happens to it after that. 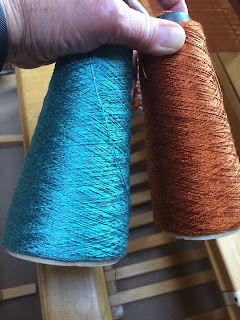 The Fiber Market Day event was disappointing this year in terms of sales, plus spring is not a good time to sell scarves.  People are looking forward to summer.  So what am I doing? 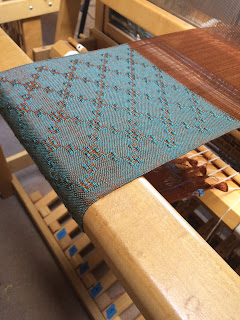 I'm weaving more scarves and still playing around with iridescence. 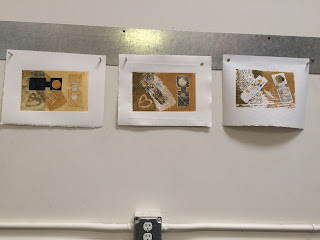 Things have changed at the A6 gallery as far as ambassadorship positions go - that's what volunteers are called.  It's pretty sweet.  The $80 monthly fee is waived in trade for four hours once a week.  Interest in the gallery and classes has increased membership and more people would like that opportunity.  We are all now half time but that frees up a block of four hours for me, so I went in the other day to work on my own.  I didn't know what I wanted to do and hoped inspiration would come. 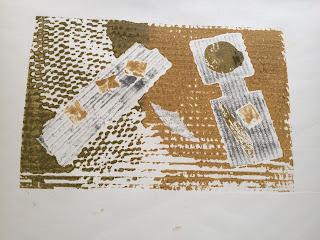 Last week I had painted a piece of cardboard with acrylic medium to seal it.  So I decided to start with a print of that.  I cut up some pieces and laid them around, including a strip of the netting vegetables come wrapped in.  I printed on newsprint as a proof and wish I had used Rives BFK, a mistake I won't repeat. 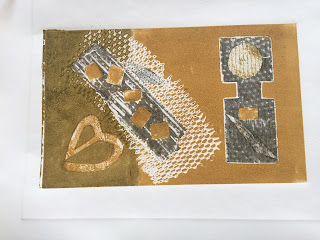 I cleaned up my cardboard plate and inked up a plexiglass plate instead.  I pretty much used the same elements and ran it through the press, this time using Rives.  Much better, but I used graphite black since someone already how it out on an inking plate and I am unfamiliar with how it works.  It's transparent and just not quite black. 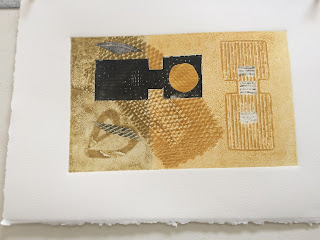 Beal was working next to me and asked me if I was going to print the ghost.  That's a print with the remaining ink and a few new elements.  I told her I didn't have any paper in the soaking tray.  That's okay, she said - use mine.  I'm leaving and you can just have it.  She saw that my previous print was very close in value and suggested I introduce some this time.  I inked my template with carbon black this time and holy cow, it's a punch in the face, but I like them both. 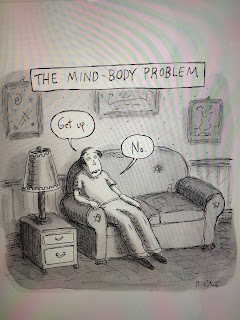 I'll leave you with this.

So sorry the sale wasn't as successful as last year. You just never know!!! Love the new art prints! I'm so glad you are enjoying your new art medium.