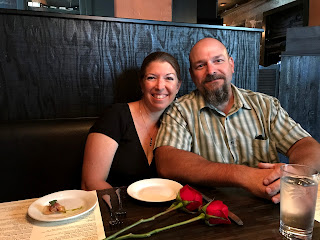 June 21st was Josh and Missy's 20th anniversary and we wanted to take them out to dinner to celebrate.  We've saved our bottle deposit refund money all year thinking we'd take ourselves out for our anniversary this year but it was much more fun to take the kids out instead.  We chose the Blacksmith, a rather swanky place, but they did it up right including the roses. 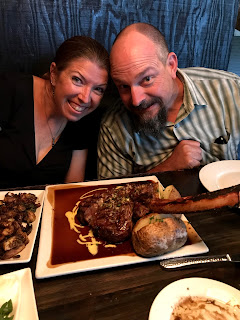 They ordered the Tomahawk steak for two which I thought was quite the romantic choice.  It was a work night and they said they raced into the house, threw off their work clothes and threw on their dinner clothes.  That's what their life has been like though Missy just finished her masters degree and will have that monkey off her back in the future.  And a good time was had by all. 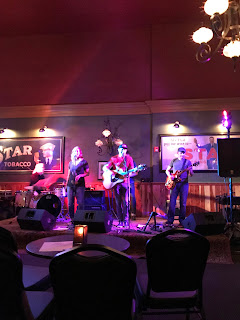 We have acquired quite the social agenda this year.  This was the Brian Copeland Band at McMenamins.  David and Joanie asked if we might like to come hear their niece Kat sing backup in this Portland group so we said sure but we only lasted to the break. We had gone with them to see Rent last Sunday, a firecracker day, and those poor actors, dressed up for winter on the hottest day of the year so far.  We had so much fun that we're thinking about getting season tickets for the theater next year. 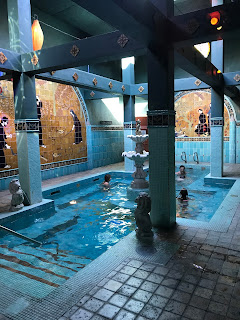 Meanwhile I'm thinking about this soaking pool.  McMennamins is in the old St Francis School, a whole complex of entertainment opportunities including a theater that runs classic movies.  The concert was in the Father Luke's room and the events there are free.  I'm not sure I have the energy to enjoy all that they offer! 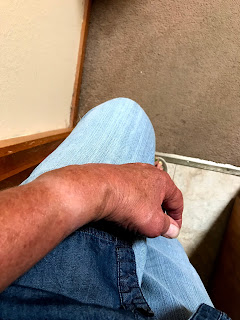 Meanwhile, I continue tackling yard work in the cool of the mornings. Yesterday I was doing laundry and yard work in shifts.  I checked my Fitbit for the time and came in at 10:06 to pull partially wet clothes from the dryer to hang.  I realized my Fitbit was no longer on my wrist and checked the time on my phone - 10:33.  Where had I been in those 25 minutes?  Everywhere!!  I had moved compost and raked mulch, pulled grass and clipped dead blossoms from the lilac tree.

I spent more time looking for the Fitbit than I did on yard work.  A friend suggested I open the bluetooth on my phone and see if I could get them to pair.  Still no luck.  I finally googled "how to find a lost Fitbit" and discovered there's an app for just that. 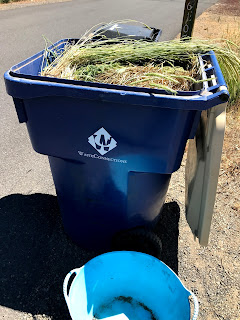 I walked around with it scanning and realized the only place that I hadn't checked was the yard waste dumpster which Ian had already taken out to the curb for pick-up in the morning. 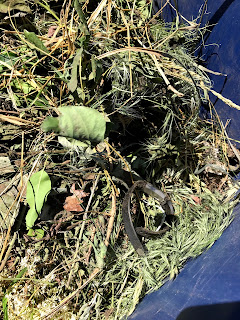 Bingo!  I had to walk all the way back up our long driveway for a yard basket and my gloves so I could unload the waste without just dumping it on the ground and make yet more work for myself.  My iPhone activity monitor gave  me 11,000 steps for the day.  It's fallen off my wrist before so now I've ordered two replacement bands with safety fasteners. 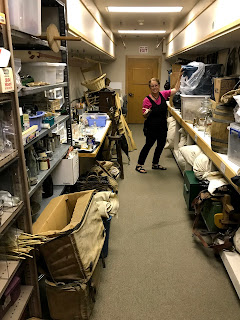 Niece Allison put me in touch with Linda Evans of the High Desert Museum who apparently is looking for spinners to participate in character and interact with the public.  I went down this morning to meet with her and to clarify what she was expecting.  Allison mentioned a week-long program called Frontier Days. She took me to the storage area where they had various articles she thought I might be able to employ. 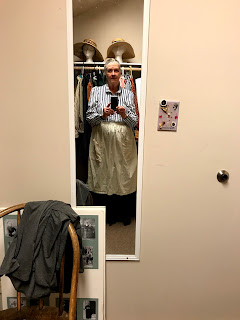 By the time we were done talking, I had committed to being a regular volunteer on Fridays from 11:00-4:00.  This is my costume, she is going to fit me for a corset later and I've ordered boots online from eBay.  I think the weekly gig is primarily for the summer tourist months so it shouldn't interfere with the SMART kindergarten reading program during the school year.  My spinning wheel and I start July 14th. 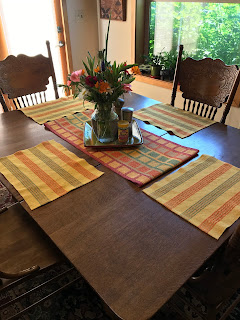 Meanwhile I finished my placemats from Suzie Liles' pattern in the latest Handwoven.  She used linen and I substituted 8/2 cotton.  I love the colors but they're just too thin in my opinion.  I'm going to try to create the pattern in Fiberworks substituting 3/2 cotton instead or else just use Turned Taquete which is double thick.  I'll have to substitute different colors as I used up the last of these cones.  Actually, in looking at the picture I think I would actually like the squares instead of stripes.  For another day.

Fireworks are going off as I type.  The 4th of July is just four days away and its legal to sell fireworks in this state.  Temporary tents are set up everywhere and even Costco has some for sale.  It's going to be a noisy night.

and you thought that spinning wheel would be put away for a while! It sounds like a fun time. I agree with the thought that 2/8 cotton is too light for placemats. I do like the colours though. They are very cheerful.

Wow; so glad you found your FitBit! Mine wouldn't charge; I think it's the charging cord. When I go in to work next week, I'll see if I can cob one from another box (my boss bought enough FitBits for all of us but several weren't interested). I feel naked without mine now!

They are very cheerful.