Getting in the Summer Groove 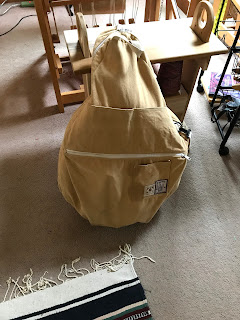 I made a momentous decision this week.  I've put my spinning wheel into it's carrying bag, not to go somewhere but to be stored in the closet.  I've spun almost every day for the past 20 years, that is, until we moved here and there's just not enough time in the day.  Maybe later. 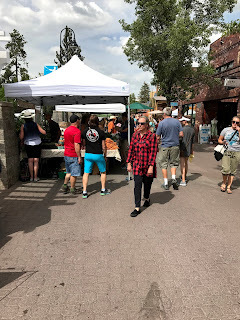 This Wednesday was the first day of the downtown farmers market and we were eager to shop. 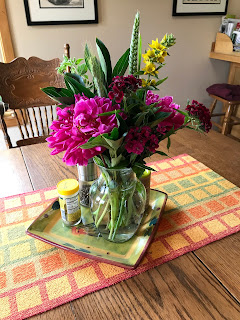 The only thing we got this time was salad greens and this $5 bouquet of flowers.  Later in the summer we will need two bags to carry all our haul, especially when the melons are in season. 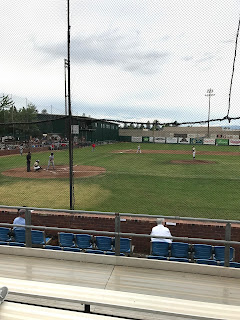 And this week is also kickoff for the Bend Elks, a college summer league.  Wednesday night is Seniors night so we got in for a buck each.  The kids met up with us after work and it was great - lots of laughter, stadium food and beer, and the game was good too.  This year one of the players is from Bend, a hometown boy which makes it extra special.  Cal played in Little League with grandson Logan and his dad was the team coach.  We happened to sit next to his parents so it was fun for Missy and Josh, visiting with their friends.  It's fun for me to "know" someone on the team. 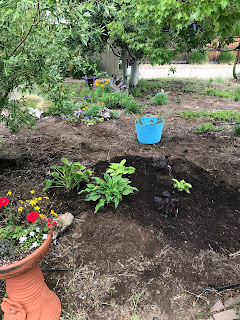 The planting of the hostas was the easiest part.  Last year Ian pulled up two huge root systems from the Frankenplant that is still vexing us with residual runners.  Think twice before planting Honeysuckle Bush Copper!  The last unwanted plant to come out of this shady bed was a spindly forsythia.  Ian finished that on Monday so Tuesday I bought two bags of compost to replace the missing roots and finished pulling out the weeds and native yarrow.  It's been rainy for the past two days and these guys are loving it.  The timing is perfect to help them get established before the heat hits.  The work was worth it! 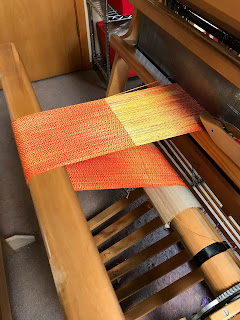 I'm still weaving, just not as often as I was during the winter months.  This is from the third of the workshop painted warps and looks like a sunset to me. 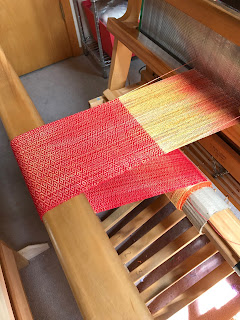 I used red weft on the second scarf.  I really like it, but I'm concerned that the curious color combination will be a tough sell.  I'd like to weave the last warp soon, as my granddaughter Alexia is coming in July to stay for a month.  She says she wants to come weave and knit with me and I'd like this loom to be for her use while she's here. 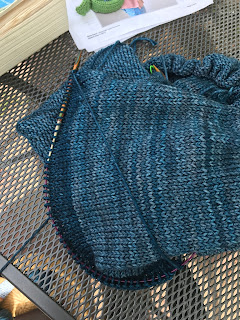 I'm knitting Heidi Kirrmaier's Quick Sand pattern again, but this time in Malabrigos Rios, colorway Bobby Blue.  I had one skein left after Owen's cardigan and when Diane Soucy visited last summer, she offered to send me the two extras she had so I ordered two more from Yarn Barn, for a total of five skeins.  The problem is that one of the skeins from Diane is substantially darker than the rest.  I've spent months trying to figure out how to make this work and finally decided to knit the sleeves first and knit the last 3" in the dark yarn.  I'll do the same with the body and also knit the bands with it.  The gauge isn't right for the pattern so I've done a little fudging but my math-challenged brain believes that it will fit in the end.  So that's what I do in the mornings instead of spinning.  I knit on the patio and have my coffee.