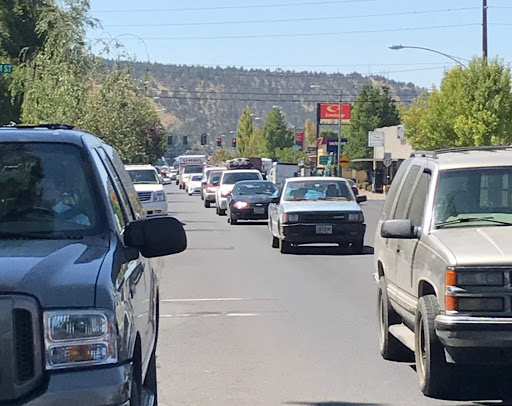 It's been an interesting month.  For weeks we've been preparing for the total solar eclipse tomorrow morning.  Officials anticipate an additional 200,000 people will converge on Central Oregon and have repeatedly warned us that there might be food and gas shortages, to stock up in advance, and indeed, the pumps and grocery stores have been very busy this past week.  Prineville was sorely tested until Thursday as cars traveled through bringing 30,000 world music fans to the Symbiosis eclipse concert to the Ochoco National Forest east of there.  It's hoped that egress won't be as bad since many plan to continue south to Burning Man in the Black Rock Desert of Nevada.  People have come in from all over the world for this concert. 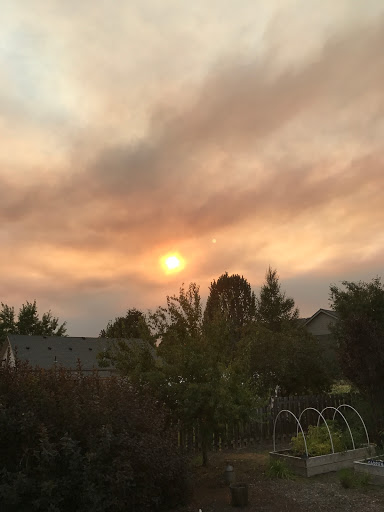 Compounding matters are the wildfires and smoke from them.  The Milli fire burning southwest of Sisters exploded on Thursday and caused the evacuation of 600 residents near McKenzie pass, and at this point is approximately 8,500 acres with 0% containment.  This shot is taken from our backyard, and the smoke is worse to the southwest of us in the Sun River area.  I went to the museum on Friday but the smoke was hanging on, seeming to cling to the trees, so Linda had us go in after a couple of hours leaving only two to staff the Miller Ranch area.  Visitors were down anyway though almost everyone told us they were visiting for the eclipse. 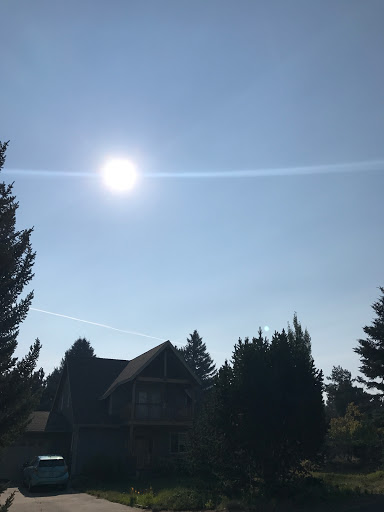 I've been concerned that we might not be able to see the eclipse after all this build up, so I took this picture from our driveway at 10:20.  We'll be fine - phew! 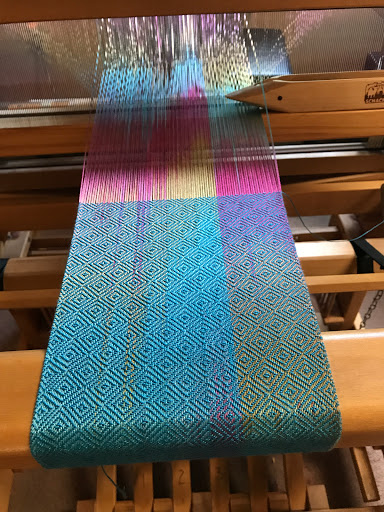 I started weaving my hand painted warp with the lavender, and while it was neutral and showed up the warp, it also saddened it.  I didn't like so much that I tore out the 8" I have woven and substituted this blue which I think made is come alive. 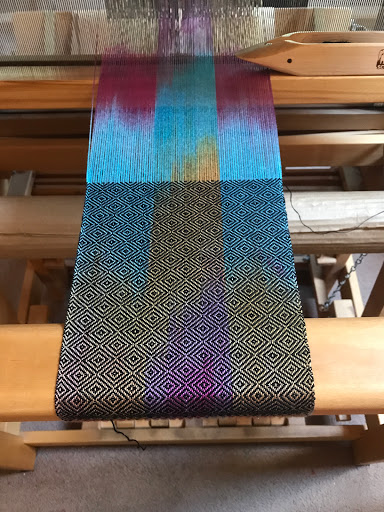 I had planned to weave the second scarf with magenta but I think the bleakness of the fires got to me because this is what happened instead.  It depends on the winds and movement of air but some days we just have to close the house up to keep the smoke out.  I haven't been able to walk in the morning for a couple of weeks and my body misses it. 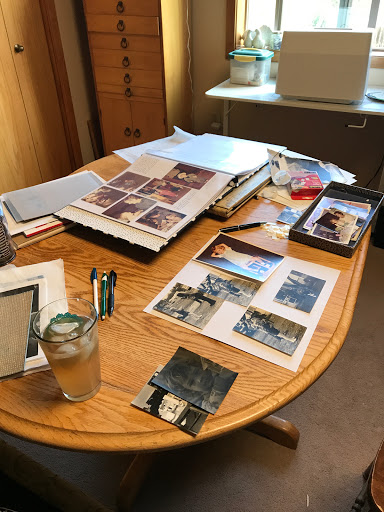 I was going to finish weaving it yesterday but I had this photo album project right in the middle of my work area.  I've procrastinated on this album for the past year.  The album I did before this one dragged on for a month so I just went for it and finished up about 6:00 last evening.  I don't know if my kids will ever look at the albums but at least they're labeled and in approximate chronological order, unlike the photo albums my parents left behind.  It feels great to have finally finished! 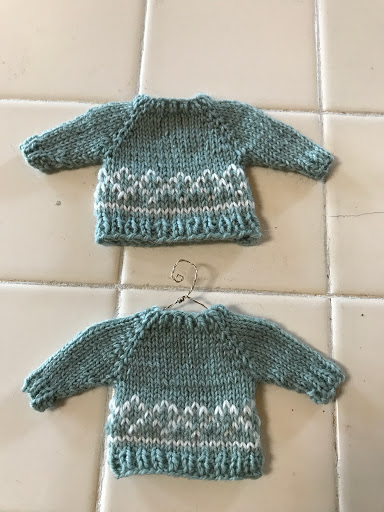 My attention got diverted from weaving once again, but this time by these tiny sweaters.  I feel like I need something catchy for our booth at the guild holiday sale November 4th.  Mary, Gillian and I are going to share a booth again this year, and when Mary told me she's working on some new ideas, I realized I hadn't even thought of it.  Now I have and I'm pretty excited about these. My first sample was on size 2 needles and just too big.  I switched to 1s and now it looks like an ornament to me.  I need to get some better wire for hangers. 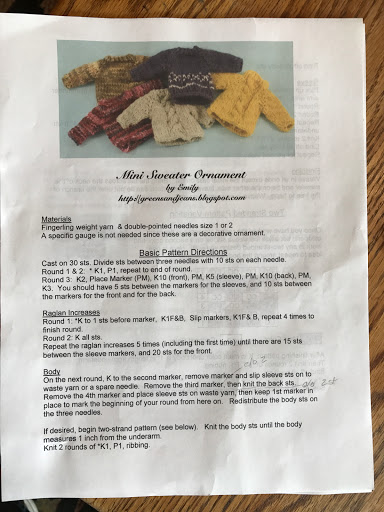 The pattern is a free download on Ravelry, easy to follow and knits up pretty quickly.  My plan is to knit up a dozen or so and hope I don't burn out before the sale.  I think they'll be good attention getters.
Posted by Sharon at 4:35 PM

Eclipse frenzy is here, also! I'm glad I can view it from my backyard! The wee sweater ornaments are precious!!!

I love the little sweaters. What a great use for leftover bits of yarn. They will get lots of attention, I'm sure.