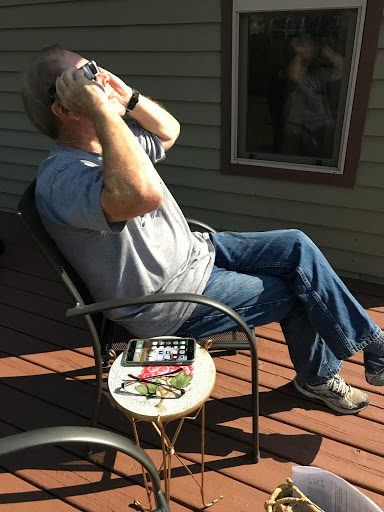 We sat on our deck and watched the eclipse which wasn't total here but it still was a really cool experience. 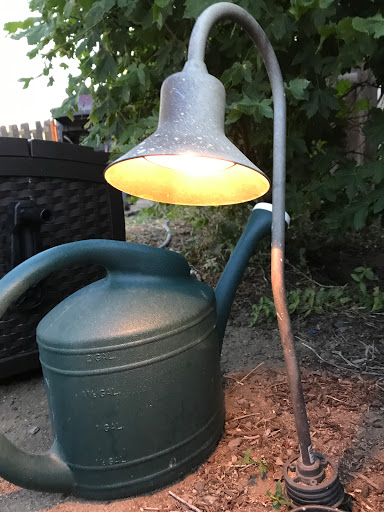 We were surprised at how quickly the temperature dropped and even though it only seemed like twilight, it fooled our yard lights into turning themselves on! 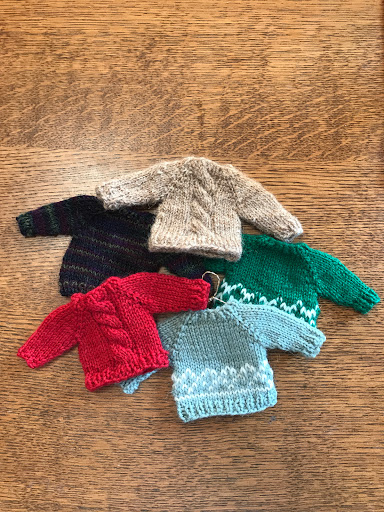 I've suspended knitting on my sweataer and am working away on my miniatures for the guild holiday sale.  They're pretty quick and still pretty fun but I'm a long way from my goal of at least a dozen.  I was going to buy some heavier gauge wire to make the hangers but have decided to make due with the 27 gauge that I do have and even though it's annoying to twist the two strands together.  I'll do them a few here and there. 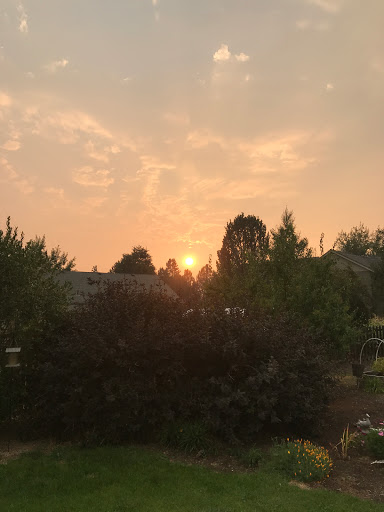 We're stuck with a summer of smoke as they don't expect the Chetco Fire in SW Oregon to be out until sometime in October.  It's the largest fire in the US, and at this point is 0% contained.  Some days are worse than others so then we just close up the house and hope the next day is better. 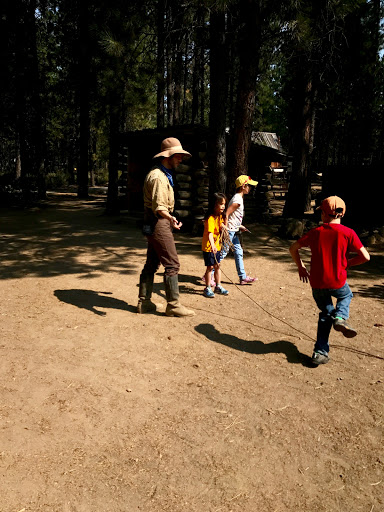 Yesterday was a nice day at the High Desert Museum, and since it wasn't an especially busy day, Ethan decided to practice with the rawhide lariat, inviting the children to give it a try.  It's an authentic piece and is so impossibly long and heavy, I can't imagine it being useful or manageable. 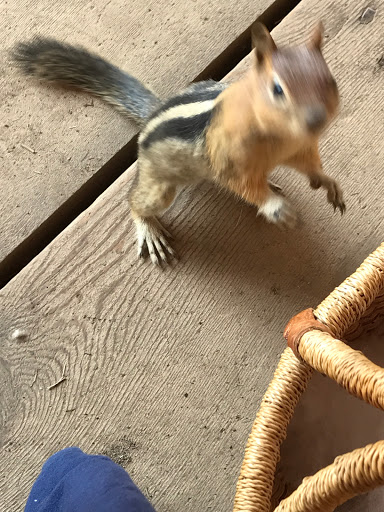 For whatever reason the chipmunks were especially inquisitive and pesky.  I'm told that off all the animals at the HDM, children vote the chipmunks as they're favorite.  They kept trying to enter the ranch house so as soon as we'd run them out one door, they'd scamper to the other and scoot back in, and repeat. 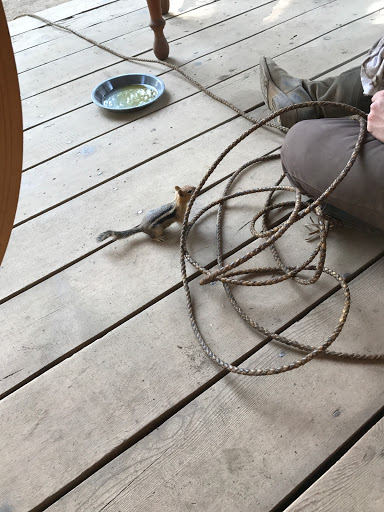 Ethan took time to oil the lariat with linseed oil with the help of a friend.  At one point he had his front paws on my wheel and was investigating my work.  The smoke and heat were tolerable yesterday so we kept the living history ranch open the whole schedule time, from 11:00-4:00.  I ended up spinning all the wool I had washed and prepared so need to work on getting more done this week.

Late in the afternoon it got really quiet so Hayden brought out a writing desk from the cabin and worked on the love letter he had been writing.  I asked if he would mind reading it to us so you can hear it here if you'd like.  Mind you, we were pretty tired by that point. 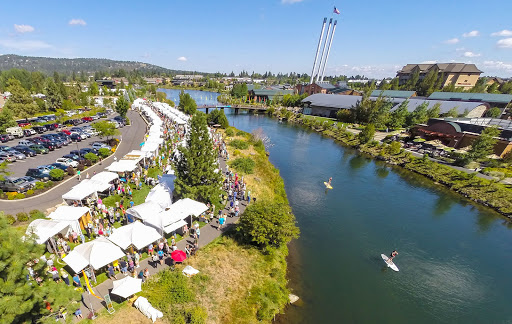 Ian I went to Art in the High Desert today, which is supposed to be one of the top ten art shows in the country.  I enjoyed visiting with weavers and printmakers alike. 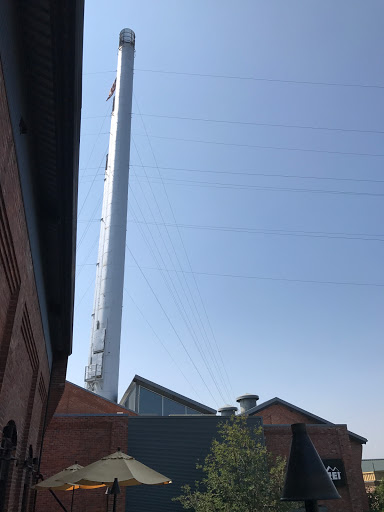 We went to lunch afterwards at Level 2, a fusion restaurant in the shadow of the Old Mill smoke stacks.  After resting my feet and filling my stomach, I felt like I want to go back for round two.  All of the prints I saw and especially those of one printmaker were really calling my name.  Then I told Ian that, nah - let's just go home, which lasted until we got to the footbridge when I decided I wanted the one print that we had both liked. 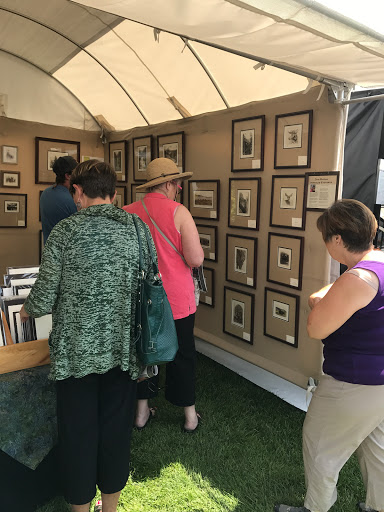 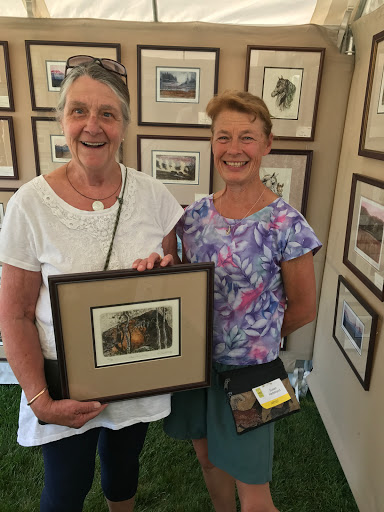 Her name is Susan Hestrand and all of her prints are etchings which is the process I'm learning right now. We had chatted quite a bit and she gave me a couple of tips and suggested several books.  I love her work! 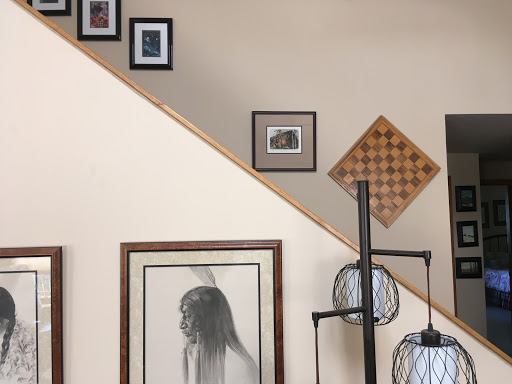 It seemed to fit nicely into the last remaining blank spot on our walls.  I had been saving it for some of my work but I can see that there's still plenty of room there for me too.

You had a busy week!!! I agree with the kids...chipmunks are so entertaining! I'm not surprised that you are spinning at the Museum. It is so relaxing to just sit and spin. Folks are always drawn to the spinner, and before you know it, you need more fiber!!!!